My kid rarely acts out, but when he does, my goal is to make sure he understands that there are ramifications to his actions or his loose tongue. At home, as parents, we tolerate all sorts of behavior since a father-child relationship is much different than most other ones.

The age difference and the unconditional love that exist between a parent and their offspring create a somewhat “artificial” environment when it comes to how they treat each other. While it would not be reasonable to see anyone else yelling, screaming, or throwing things at me without a drastic retaliation, parents would forgive on many occasions when it comes to kids.

While I don’t believe that coming down hard on a child is necessarily the best course of action, I do feel it’s my duty to explain the nature of action/reaction and cause/effect so that my child doesn’t venture into the real world assuming he can lash out unrestrained and unfiltered and think that he’ll be showered with affection and forgiveness.

In my opinion, a parent’s ultimate objective should be:

To do that, I’ve seen parents use sanctions that cut their children from their favorite things. They take away their ability to visit friends, surf the Web, eat sweets, have a smartphone, go to parks and activities, and sometimes even speak with their parents (the silent treatment).

The hope is that the child will do some soul-searching and that the experience will teach them some tough love so that they change from within, highlighting to them that the purpose of the sanctions is to ultimately better their life.

Children can often have strong emotional responses when they feel tired or hungry since they haven’t learned emotional control or the true cost of lashing out yet.

Today, Western countries are applying sanctions on Russia. It’s not so that Vladimir Putin will say he’s sorry but so that the pain he feels is too great for him to pursue his vision of a grand Mother Russia.

Russia is getting isolated from the global economy: 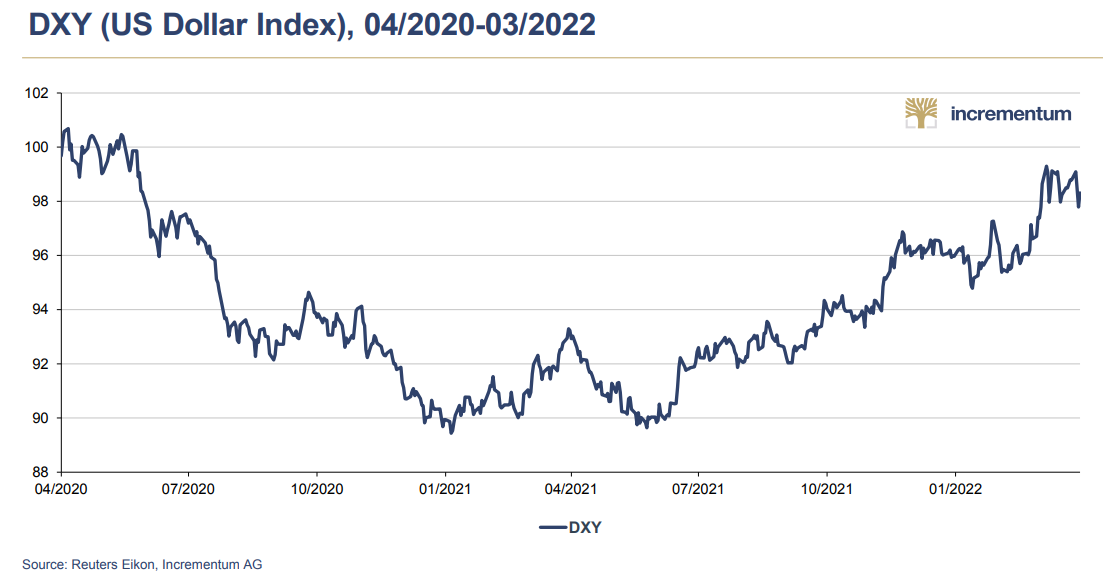 From Putin and his closest allies to the institutions and businesses and the average Russian citizen, the sanctions are meant to inflict enough pain to make Putin pivot.

The DXY level of 90.00 is the line that separates the bull and bear market. We believe that peace talks and a resolution to this war would be bearish for the dollar because many are parked in cash right now!

Contrary to conventional wisdom, gold could spike above $2,000 the second the war is over because the rush to risk assets will be renewed.