August Kekulé was a chemist who was attempting to figure out the molecular structure of benzene, a hydrocarbon that, unlike many of the other molecules in its family, didn’t possess more hydrogen than carbon, but a similar amount: six atoms of each.

The year was 1862, and because he was obsessed with this enigma, he was frustrated and took a nap next to the fireplace.

In his dream, a snake appeared, biting its own tail. When August awoke, the self-biting snake inspired him to finally crack the structure of benzene, which marked a huge breakthrough in chemistry and organic matter.

Humans have always dreamed. In fact, the average person spends two hours per night dreaming, which adds up to about 60,000 hours in total. All told, we spend a decade of our lives dreaming.

There must be a purpose for this, an advantage or mission that it accomplishes, but for thousands of years, scientists weren’t included in the conversation. Instead, it was just assumed that these are spiritual experiences, ways of communicating with the almighty, or something of that nature.

When Sigmund Freud began to study sleep, the field opened up to debate. We are now aware of four stages: transition (where the body enters sleep), light sleep, deep sleep, and REM, which stands for rapid eye movement, when our eyes move super-fast, our brains are active, and we are dreaming!

No one knows the purpose of this, but some hypotheses suggest that dreams help store memories. Others say that we are practicing or preparing, while some claim that we get inspirational ideas that are hard to concoct while fully awake since limiting beliefs would restrain them.

When our dreams take a dark turn, we call them nightmares.

Some have called the time we’re living in nightmarish and point their finger at governments and central banks for the way they handle the currency system we are transacting in.

The worst type of dreams are delusions, and our politicians and central bankers have been asleep at the wheel, delusional about the effects of currency printing until they finally went overboard. We now have lingering, real, and structural (sticky) inflation. 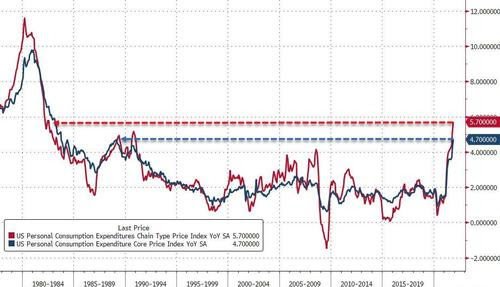 As we enter 2022, my dream of seeing gold trading for $2,800 by 2024 looks far more realistic than the central banking community fantasy that we’ll just create endless currency units and still remain below 2% CPI!

The trend is indicative of higher inflationary expectations from the public, and if the general population begins to equate cash with trash, they will act accordingly and create a self-fulfilling prophecy.

The economy is certainly opening up, and we are entering peak Covid fears. For most people, Omicron is a reminder that this is not March 2020 and that the world is prepared for variants.

This will further solidify that we are moving on, and we think that news of more labor shortages, more supply chain glitches, and more talk of higher taxes will spook the market ahead of the midterms, paving the way for gold to shine.

That’s my dream, and I’m sticking to it.