A HUGE Silver Rally is Coming!

A major bottom is forming in silver right now, and this may be an ideal time to take a long-term position.

One reliable driver of silver prices is inflation, and I fully expect inflation to take its toll on the U.S. economy while simultaneously bolstering precious metals. The following chart shows not inflation or consumer prices, but the change in consumer prices: 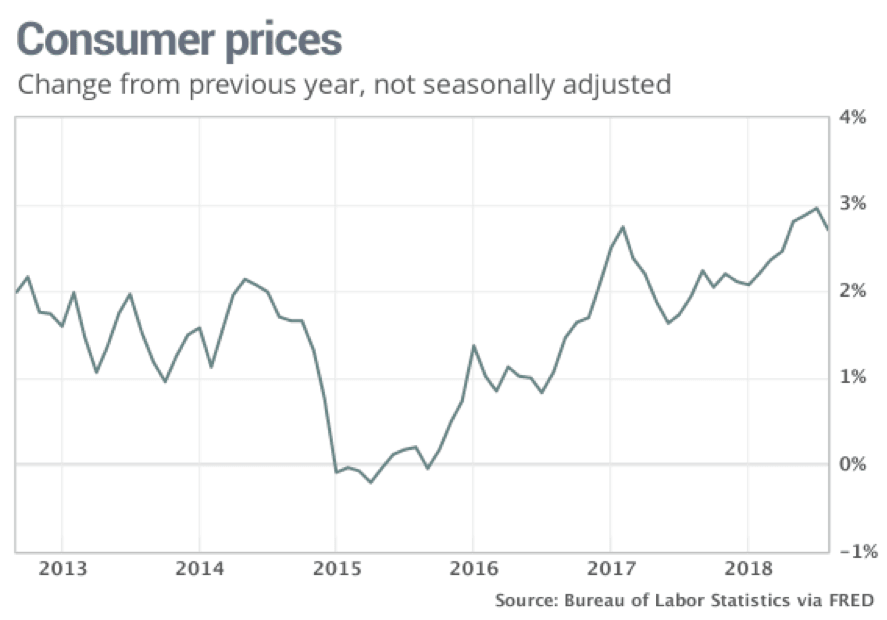 In other words, already-elevated inflation in the U.S. has been getting worse. Consumers aren’t getting much bang for their buck (literally) anymore, and while this isn’t healthy for the economy, it’s very likely to boost silver prices.

It’s a negative correlation that seasoned investors have seen time and again: the inevitable decline in the value of the dollar causes investors to flock to precious metals as a more secure store of wealth.

When King Dollar is devalued, investors will be forced to find ways to hedge against inflation – and silver will be the perfect candidate.

It is true that silver fluctuates more than gold, but that’s precisely what makes it such an exciting opportunity when prices are depressed: the upside potential is massive. Over-corrections to the downside – which is what silver is experiencing right now – leave plenty of room for the pendulum to swing the other way.

Please don’t misunderstand: I’m invested in both gold and silver. But if you’re looking for the really big gains, silver can give you an edge over gold. Deeper valleys, like what we’ve seen in 2018 so far, are merely the precursors of vastly higher peaks in gold when compared to silver:

The table above illustrates the differential: bigger moves in silver compared to gold and a change to ride the wave much higher in the coming bull market in precious metals. Granted, it’s a tougher ride if you get in at the worst possible time, but silver passed that point a long time ago.

With the U.S. dollar head-faking to the upside and ready to run out of gas and the devastating impact of hyperinflation a sure bet, Future Money Trends sees silver as over-correcting and poised to explode to the upside. And make no mistake – silver is, indeed, over-correcting: 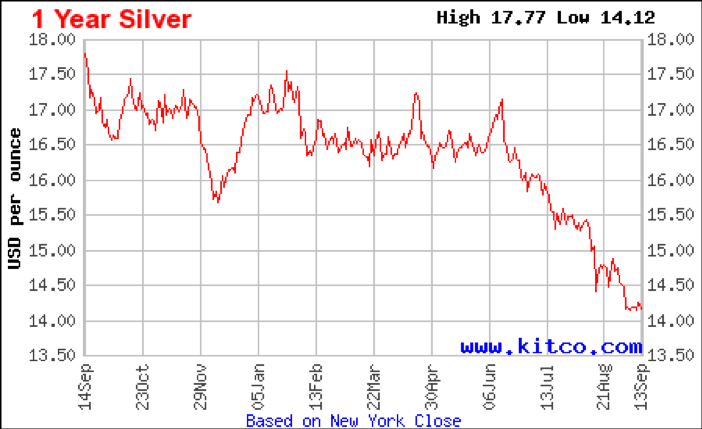 Technical analysts would call this a “swing low,” but I call it a rare opportunity.

In fact, I’m actually glad to see silver escape from its months-long sideways drift – it’s a chance to start a new long position or add to an existing one.

That’s my philosophy when it comes to these situations: don’t worry, be happy. Or more precisely, don’t fret, just accumulate.

Silver has been around for thousands of years as an investible commodity, and it’s not going anywhere. Pull back the chart and you’ll see that we’ve seen silver at this price point before: 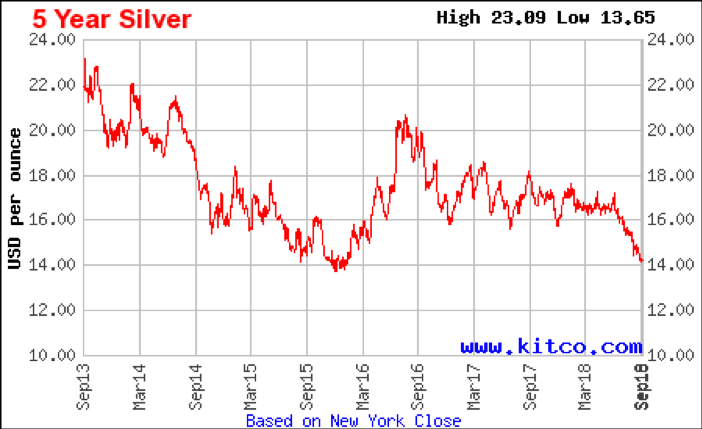 Notice what happened the last time we were at this level in late 2015: the price shot up like a rocket, easily eclipsing $20 per ounce. If that doesn’t sound impressive at its face, consider the fact that a move from $14 to $20 represents an increase of 43%.

We’re at that $14 level again, and there’s no reason why silver shouldn’t reclaim $20 at the very least. We’ve seen it higher than that – a lot higher, actually: 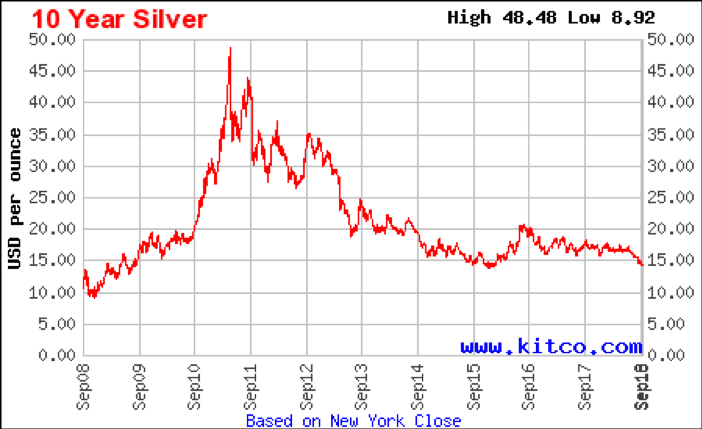 If the previous pinnacle was close to $50, then $20 would be an understated price target, wouldn’t you agree? Getting in when prices are low is the name of the game and the key to real wealth. With plenty of liquidity and millennia as a go-to asset for growth-oriented but safety-conscious investors, silver is the gold standard (so to speak) of investments in 2018.

And then you’ve got the gold-silver ratio. Hovering around the 85 level, the ratio has gone from extreme to obscene: 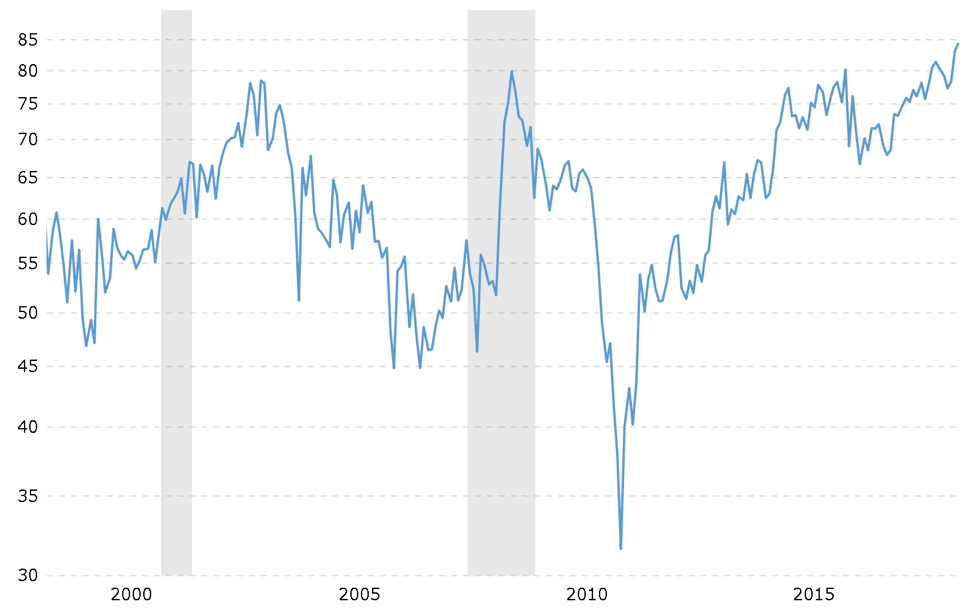 The markets haven’t witnessed silver prices at this deep of a discount compared to gold prices in a very long time. This means that silver is setting up for a major bull market, as history shows that silver tends to outperform when the gold-silver ratio reaches these levels.

If you can believe it, when the gold-silver ratio recently registered above 85, this was the highest reading since September of 1993. For reference, bear in mind that this ratio, which measures how many ounces of silver would equal the price of an ounce of gold, has a historical average of around 50.

Speaking of out-of-whack ratios, let’s take a look at the Dow Jones-to-silver ratio, which has reached insane and unsustainable levels:

We can observe a couple of peaks as we entered headlong into the Great Recession, but that was child’s play compared to what we’re witnessing now. The Dow Jones-to-silver ratio is over 1,800, which says a great deal about both the stock market and silver. Something’s got to give, and I’m quite confident it’s not silver.

When the currently long-in-the-tooth equities bull market does collapse under its own weight, hordes of investors will clamor for commodities, and I expect silver traders to overreact once again, but not to the downside. No, it will be a beautiful and long-awaited over-correction to new highs as investors rediscover their age-old friend: silver.

It will be reminiscent of the 1970s in America. It was not necessarily a joyous time for the Dow or the S&P 500, but a spectacular era for silver, in which a $100 investment ballooned to $3,105.

Yes, the rally is coming, and we will see silver outperform once again. The argument could be made that it never should have gone down in the first place, but irrational corrections are what market opportunities are made of.

And now it’s your turn: check the charts, look around at what’s going on in the world and the markets, and rebalance your portfolio accordingly.

I’ve been in this game for a long time, and I can tell you one thing: silver has never looked so good.

Editor’s Note: I purchase all of my precious metals from MilesFranklin.com. I know the owners well and they’ve been in business for 3 decades without a single complaint. Literally, look at their Better Business Bureau reviews and rating.

They are great people, very honest, and happen to be one of the only shops invited to shows like Sprott and Casey conferences, who are actually their competitors, as both Sprott and Doug Casey have ownership in competing bullion-type companies. I think that says a lot about Andy Schectman and Miles Franklin, when even their competitors introduce them to their own clients.