Are You Seeing This or Am I Crazy? Be Honest!

Natural remedies are an unstoppable trend, and the world is better for it.

We’ve all seen the health stories about the miracles that former cancer patients have told of their healing from natural remedies where chemo and radiation failed.

I personally have a testimony to being healed using the tools the Earth gave us.

In 2017, I could barely get out of bed and walk. It took me about 30 minutes in the morning to get my knees to stop hurting.

After months of this, I finally went to the doctor. They did an MRI and set up a follow-up appointment to give me their findings and Western medicine solutions.

They told me that arthritis in both of my knees was severe and that my right knee would need to be replaced within 10 years.

They wanted me to immediately start with cortisone shots every 6 weeks and the nurse was ready. If I had allowed them, the cortisone would have been injected into me that day.

They wanted me to take aspirin daily but new research had come out to reveal that using it as a daily pain reliever could have a lot more downside over the long-term.

After having researched natural healthcare for cancer extensively in 2009 when my mother was diagnosed with Leukemia, I decided to tell the doctors no thanks to the cortisone and that I would like to wait at least 1 week before I went with their recommendations.

Instead, I went home and started doing some digging on natural ways to heal arthritis.

I found about three medical companies dedicated to natural cures and treatments for arthritis and simply looked for their common denominators.

It wasn’t hard because the same treatments kept coming up and it was simple enough to where I could implement them without even changing my lifestyle much.

Every day, I began to take the following with food: turmeric, ginger, frankincense oil, white willow bark, and omega 3.

But it wasn’t a little; I started taking a ton, around 5x more than whatever the bottles said. I was in severe pain and needed to know if this could work or not because my knees were in pain.

The Websites I found also said that in addition to adding these to my diet, I should also cut back on anything that caused inflammation, like sugar and bread (refined carbs).

At about the same time, I had begun to heavily invest in cannabis companies, which often had me at a dispensary or manufacturing location where I would try the products.

Prior to trying cannabis in my professional career, I actually had no previous experience. I had never tried it, even in my teens or 20s.

I only mention this because my daily dose of anti-inflammation treatment also started when I began to take CBD daily through edible products.

***Within two days of taking natural remedies, I began to feel better.

First, it was relief in the morning, and then by day 5, I honestly felt fully healed.

I was like a recently converted religious person. I made a ziplock bag full of my anti-inflammation cocktail and gave it to my 70-year-old neighbor Richard, who could barely move because of arthritis in both of his knees as well.

I’m not even joking: by day two, I was in my kitchen drinking coffee and I saw Richard RUNNING by outside (a slow jog).

By the time my 1-week follow-up appointment came, I didn’t even have the heart to tell the doctors what had happened. I lied to them and told them that their advice to take aspirin worked and that I would just reach out to them if the pain came back. I didn’t want to deal with the skepticism of Western doctors who don’t really practice medicine and just do what the pharmaceutical companies tell them to do.

It’s like when my kids were born and they wanted to give them a hepatitis B vaccine within 24 hours of their perfect little bodies being born. When I asked the nurse why they would put a foreign liquid in such a young life, they told me that it was to lower the risk of my child getting hepatitis through their mother, a mom who DIDN’T have it. She was a mom who had been poked by doctors for 9 months, one where we had 100% certainty she did not have hepatitis.

Realizing that this was B.S. I kept asking the nurse how a baby could get it. The other two answers were unprotected sex or consuming feces from someone who had it.

Needless to say, I told them no thank you on the shot when they were 24 hours old.

I bring these stories up because I know they’re probably relatable to a lot of you reading this.

It doesn’t matter what generation someone is: baby boomers love natural health, and so do millennials.

***From our food and yoga to our doctors, the search for solutions coming directly from the Earth is the way things are going.***

It’s only a matter of time before Netflix makes a documentary about the healing effects of the very investment idea I want to bring up to you today.

If you’re still reading this, I know you’re a serious investor and someone who does real research to improve your own life, as well as the finances for your family.

Psychedelics (shrooms) are an investment I’ll be making in 2020.

It won’t be as a regular investment, though, but as a punter.

To be clear, I plan to invest in 1 to 3 companies that are helping advance this natural treatment to many health ailments.

We could lose all of our money and these investments could be outlawed in the future or this may potentially be like investing in Bitcoin at $1 or a cannabis company in 2012.

I should note that Denver and Oakland voted to decriminalize the fungus that contains psilocybin in 2019, a naturally-occurring psychedelic produced by more than 200 species of mushrooms.

The states of Oregon and Washington are looking at ballot measures this year to make it legal, and even a Democratic presidential candidate has advocated for its legalization. 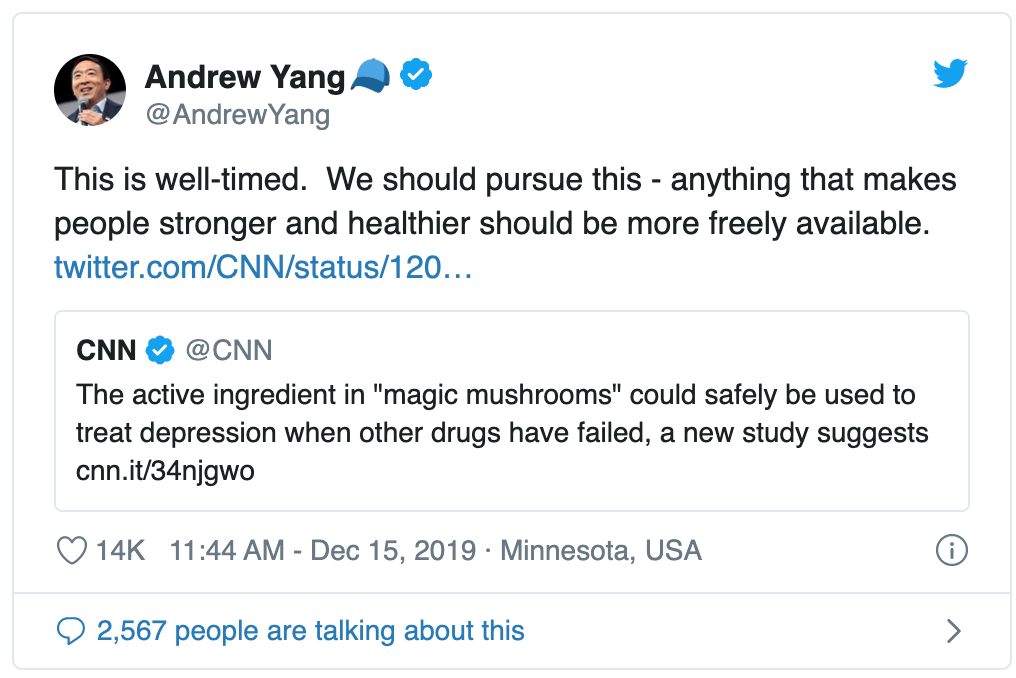 This is early: it took Colorado 7 years to go from cannabis decriminalization to medical legalization. However, it is a very clear first step for shrooms.

I’m investing in legal treatment and am only interested in medical treatment research. This has nothing to do with getting people high.

Just to give you an idea of how big this could end up becoming, a recent cancer patient who had no response to conventional treatment was written about in a medical journal because after doctors gave up hope, he started to take psychedelics.

Within weeks he was spontaneously healed from cancer!

One theory was that his immune system became aware of the cancer cells because the psychedelics decloaked cancer for discovery by the immune system.

Another cancer patient was told that she only had 3 months to live in 2009. That woman is alive today, 10 years later!

I’m a believer in natural remedies, and so are many scientists and doctors.

The company I’m investing in for this long-term speculation is already a cash-flowing cannabis play.

It’s already well-branded, with plenty of shelf space, and its subsidiary that is focused on the mushrooms has acquired formulas to make legal teas and other drinks to be mixed with edible mushrooms.

Where they have a good position is that as this becomes more widespread, they’ll already have the shelf space and customers to introduce it to.

According to Research and Markets, the global edible mushroom market is expected to grow to $62 billion by 2023.

I think that this is a company worth researching and partnering with.

On the upside, we have a very lucrative cannabis business. For the extreme speculation part of the story, they’re the only public company I’m aware of that is focused on growing an edible mushroom business that could ultimately incorporate the medicinal use of mushrooms.

Tomorrow I’ll introduce you to the full story of this company.

Never base any decision off of our advertorials. Wallace Hill LTD (FutureMoneyTrends.com) stock profiles are intended to be stock ideas, NOT recommendations. The ideas we present are high risk and you can lose your entire investment, we are not stock pickers, market timers, investment advisers, and you should not base any investment decision off our website, emails, videos, or anything we publish. Please do your own research before investing. It is crucial that you at least look at current SEDAR filings and read the latest press releases. Information contained in this profile was extracted from current documents filed with SEDAR under the company’s profile, the company web site and other publicly available sources deemed reliable. Never base any investment decision from information contained in our website or emails or any or our publications. Our report is not intended to be, nor should it be construed as an offer to buy or sell, or a solicitation of an offer to buy or sell securities, or as a recommendation to purchase anything. This publication may provide the addresses or contain hyperlinks to websites; we disclaim any responsibility for the content of any such other websites. We have been compensated by The Yield Growth four hundred and fifty thousand dollars for an active digital marketing agreement. We could be paid up to an additional four hundred and fifty thousand dollars in three quarterly payments of one hundred a fifty thousand. We have also recently participated in a private placement and own shares of the company with a four month hold on other trading restrictions. We will not sell shares within thirty days of any email coverage. We will never sell any shares during any active email coverage. Please use our site as a place to get ideas. Enjoy our videos and news analysis, but never make an investment decision off of anything we say. Please review our entire disclaimer at futuremoneytrends.com/disclaimer