Nuclear Threat is Higher than Ever

A few years ago, by way of human error, the Hawaii Emergency Management Agency accidentally prompted a message that read the following during a routine shift change drill that happens three times per day: “BALLISTIC MISSILE THREAT INBOUND TO HAWAII. SEEK IMMEDIATE SHELTER. THIS IS NOT A DRILL.”

It wasn’t a drill, but it was a false alarm that wasn’t fixed for 38 long minutes.

People got the text message and panicked, ducked for cover, looked for shelter, and some called loved ones to say goodbye.

My friend lives in Israel where the Iron Dome interception system blares a siren if an area is under attack and the system is actively intercepting inbound missiles, so he told me how residents run to the shelters and the protected areas and know exactly what they need to do.

What’s insane about this whole situation is that the U.S. has spent upwards of $300 billion on missile defense systems that threaten it, the intercontinental ones, and still hasn’t been able to produce an effective one that intercepts more than 60% of inbound launches.

Did you hear me right? Over $300 BILLION down the drain and nothing to show for it!

Yet, even knowing all of this, some 330 million Americans wake up every morning and don’t do anything different even while their enemies (China, Russia, and North Korea) have nuclear capabilities that can be fired at any time without the U.S. being able to effectively guard against them.

People choose to reside in the U.S. despite this danger because the probability of a nuclear attack is low.

Over the past few weeks, those statistical odds have risen, and because a nuclear attack is such a binary event, it’s difficult, if not impossible, to trade around it or hedge one’s portfolio.

At this point, it’s well understood that in the global struggle for supremacy between the U.S. and China, the Russians and Ukrainians are paying a price, and this has now led to oil wars.

Look at the oil reserves of the U.S. right now: 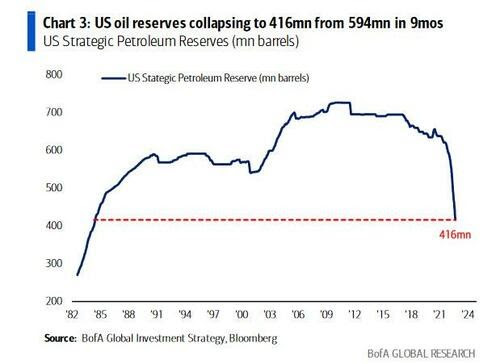 We’re in a state of crisis, and though unemployment remains incredibly low, the cost of debt is rising exponentially.

In 2022, the return on government bonds, which increases as the yield lowers, is the worst in 102 years and one of the four worst years in the past 301 years!

The next stage of the global reset is going to be the realization that interest rates aren’t going to be zero anytime soon, perhaps in your lifetime, and that government debt is not going to be considered risk-free anymore.

It’s a total change in how risk is measured, and I consider it the most important development in my career! 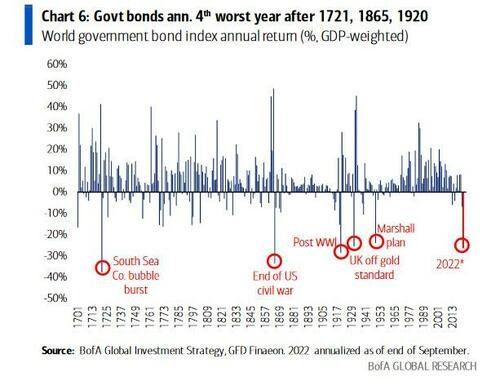 The big takeaway here is that the Federal Reserve and other central banks have now been scrutinized under the magnifying glass. In the future, every action they make will be closely monitored.

We believe that we’ve entered the era of expensive debt, and it has serious implications that we’ll cover on Thursday.

This is just the beginning of the crisis.