BEST YEAR for Commodities in 48 YEARS!

Even Democrats Fear Spending is Excessive

Biden and his team are sitting in the White House bewildered by why more people, especially young and mostly poorer adults, just aren’t getting back to the labor force. The administration has tried mandating the vaccines and saw pushback and they’ve totally canceled stimulus checks, yet shortages in hiring continue.

One reason is that American investors have been making a fortune with Ethereum and other cryptocurrencies this year. For a millennial who has made tens of thousands of dollars this year trading cryptocurrencies, there’s less of a rush to return to the rat race and low-paying service jobs. 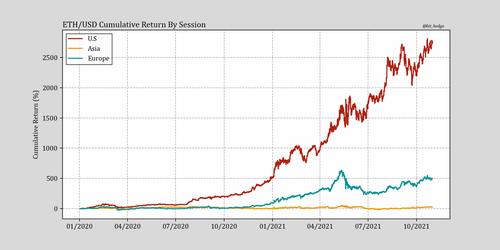 When Bernard Marcus, the billionaire founder of The Home Depot, wanted to erect the largest aquarium in the world in his hometown of Atlanta, he approached another Atlanta-based company, shipping giant UPS, and enlisted their help in transporting whale sharks from Taiwan to the newly-constructed aquarium, to which Bernard donated a whopping $250 million!

After a year of planning, UPS went on to pull the whale sharks from the sea pen by crane and housed them in specially built containers filled with water and life support systems. Because the airstrip next to it was too small, a C-130 turboprop transported them to Taipei, where they were loaded onto a 747 headed to Anchorage, where U.S. Marine Life services would handle the paperwork necessary for entry to the United States to become the first whale sharks in America.

Global logistics has solved the most complex of transports and they will find ways of unwinding our current bottlenecks, but they can’t solve the lack of trust among governments, particularly between China and the United States.

What isn’t easy or doable to get “under control” are rising wages and rents, which will continue going up for several years since family formations are increasing at a rapid pace!

Just this weekend, my partner’s brother become a dad, a good contact of mine told me that his wife is having twins, and my neighbor told me his wife is pregnant as well.

This is causing food and agriculture prices to soar, a phenomenon that mostly hurts the poor.

Food prices hurt the poor first. As you know, progressives appeal to those voters who are now becoming increasingly aware that printing currency isn’t a zero-sum game, but rather an action that may cause rising prices. 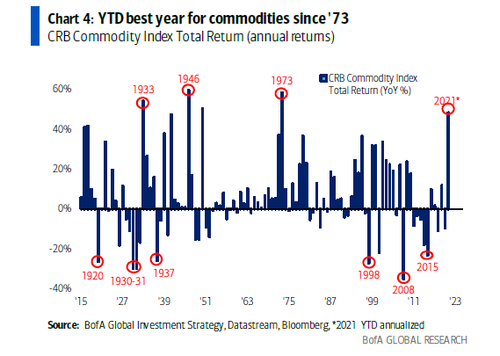 The reason that 2021 has been the best year for commodities in 48 years also has to do with hedging. Huge construction projects that take 3-10 years to complete want to secure prices and are willing to buy more in advance, thus competing with existing ongoing ones.

We see this rolling over to 2022 as well, which we expect to be another major year for commodities, not just for those that have already gone supernova, but those that have lagged as well.

As you saw on Friday, both gold and silver have begun breaking out, and we believe these are going to be a few great months for them going forward!