BRACE FOR IT: HUGE MOVE FOR GOLD STOCKS!

Mining Shares Are Officially The Cheapest Ever

This week, my family joined friends of ours at an annual rodeo show, our first ever.

The local crowd was ecstatic since the 2020 annual show was canceled, so this was their first one in two years and it was packed at the fairgrounds.

There were bulls and wild horses, and the atmosphere was pleasant and fun.

As the bull riders came out of the gate, the sheer force of the animals was immediately visible.

This is a sport in which success and failure are separated by mere seconds. Every instant that a rider can retain their composure and body control while the bull is kicking and showing its discomfort and dismay about the situation, the judges raise their personal score.

There’s prestige and money involved in these competitions, and there are major risks that go along with it. People train and practice for months just to be able to stand on the bull for another second.

After the bulls, riders were judged on their performance while riding wild horses.

It’s insane what the human body is going through while the horses are kicking and bucking, attempting to rid themselves of the rider on their backs.

Each competitor climbs onto a horse, which is held in a small pipe or wooden enclosure called a bucking chute. When the rider is ready, the gate of the bucking chute is opened and the horse bursts out and begins to buck.

There were over a dozen riders in the rodeo I attended, and one of them fell on the ground and got kicked by the horse right after.

He was hurt badly and really wanted to get up, but the kick to his rib area was not a pretty sight. When a horse does that, it’s excruciating pain.

Gold stocks remind me of rodeos.

When a cowboy is able to stay on the beast, he can advance to regional, national, and world championships and earn millions of dollars, but when he falls, no matter how professional, he is in for a world of hurt.

In the markets, we have means of protection and can protect ourselves, unlike when riding a raging bull. 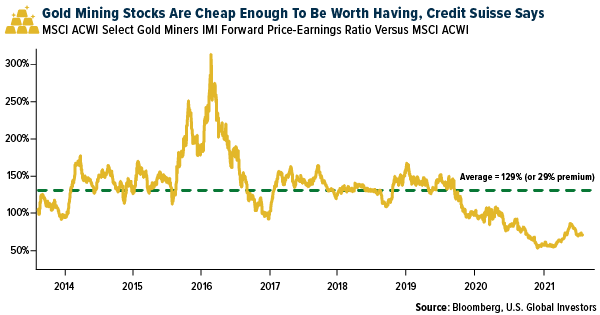 As you can see, this important chart shows that gold stocks’ P/E ratios are the most discounted they’ve ever been in the past eight years!

Said differently, compared with a basket of global stocks of all sorts, gold stocks are cheap.

That’s the reason I’m constantly adding to my existing portfolio and relentlessly searching for new ones!

Here are the precautions I’m taking, though:

In the end, a rodeo is entertaining, but not worth getting seriously injured for, in my opinion. It’s a dangerous occupation that puts much strain on the body, but for the cowboys, it’s a way of life.

Similarly, most investors will never hold a gold stock in their portfolio, but if you can catch one and ride it, as wild as it gets with these small caps, the rewards are intoxicating.

That’s the reason rodeo events attract packed crowds, and it’s the fundamental case for having exposure to the mining sector – the upside is massive.