What’s Going On Behind the Scenes?

Elon Musk became the first person to lose $200bn in equity, and he happened to do it in the span of just over a year. That’s pretty insane when you think about it because it amounts to roughly $15bn per month!

Don’t fight the FED, I guess…

When you have a child that’s out of line and must be taught a lesson, I see many parents that give their kids a pass and either don’t punish them or refuse to talk some sense into them. They never learn that their behavior is destructive and will cause issues for them in the real world, where mommy and daddy aren’t there to save them.

The central banks felt like decisions made by the collective economy were creating a stupendous misallocation of capital and realized it was time to stop with the zero interest-rate party.

It was never intended to last this long, and too many became captive of its warped reality.

The severity with which you treat a child that needs some discipline is a personal choice made by the parent. In this case, most did not anticipate such harsh punishment and commitment to the task at hand and didn’t sell their equities ahead of the reset.

The reset has been brutal. I think that it will cause zero growth in 2023 but not a stormy recession. In other words, I expect the FED to continue raising rates by 25bps at least three more times and halt further hikes in the May meeting.

I don’t expect them to cut rates until we enter a recession if we actually get into such a situation.

The global economy isn’t the only international regime change that’s underway. In matters of state, China and Russia are continuing their quest to weaken American influence and extend their own.

The reluctance of the U.S. to send its own troops to Ukraine shows the continued American pullout of regional wars. This started with the disastrous exit from the Middle East in 2011 under Obama, which immediately led to the Arab Spring, and Biden’s catastrophically designed departure from Afghanistan, which led to control by the Taliban.

As the U.S. furthers the deglobalization of its troops and influence, China and Russia will attempt to reassert their dominance over historical territories they ruled before the Bretton Woods era.

Part of this geopolitical escalation is the end of the Saudi-led petrodollar system. With the fracking revolution, America can not only take care of its energy needs but even export it to other countries, primarily in Europe.

As a way to weaken the dollar and minimize its role, the Chinese are buying lots of gold: 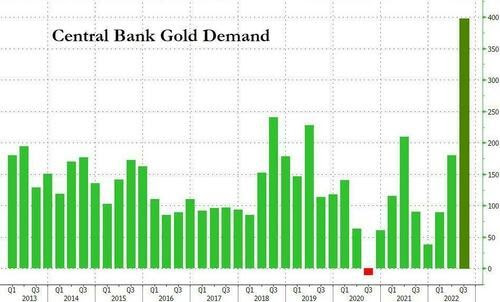 The weaponizing of the banking system with sanctions and asset freezes prompted many to purchase gold again.

In the absence of the global petrodollar system, gold becomes a crucial hedge once more.

I’ve seen certain forecasts for 2023 from leading European economists that are as high as $4,000/ounce.