It’s sad to say, but few people in the mainstream media truly understand the sheer scope and size of the cannabis market. It’s not only happening in the United States and Canada – granted, those are huge markets, but it’s really a global phenomenon, and there are plenty of untapped markets.

Consider Europe, whose population is twice the size of North America, and yet their cannabis market is miniscule in comparison. However, the demand is there: Europe wants the product, and it’s just a matter of the right company getting a foothold in key regions.

As an investor, your options have been limited if you wanted exposure to the European legalized cannabis market. It’s hard to find a company with an experienced team, the necessary connections, and access to funding. We did find one company, though, that’s making a big move into this highly promising market.

The company is known as ICC International Cannabis Corp. (CSE: WRLD.U, OTC: WLDCF), and they have cannabis assets in multiple regions of the world, including the European continent: 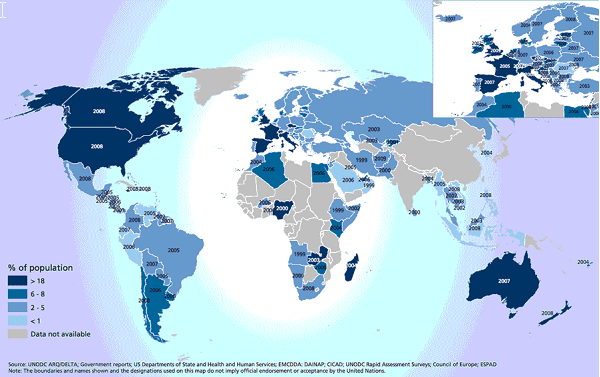 What my research team just uncovered is a hot-off-the-press news release stating that ICC has agreed to acquire 49.9% of Wayland Group Corp.’s international assets and license portfolio. The European operations, partnerships, licenses, and asset exposure will be massive for ICC as a result of this acquisition.

It’s a very different world now compared to the economic and political landscape of just a few years ago when the cannabis trade was mostly underground and secretive. Today, the legalization movement has made significant headway and the corporate media is finally starting to report on just how robust the marijuana market has become.

But most mainstream analysts are still behind the eight ball, as they’re only reporting on the growth of the industry in the United States and Canada. And while those are two very important markets, the untapped potential of international cannabis markets has yet to be seized upon by reporters – or by most cannabis companies, for that matter.

It’s a real shame because they don’t even realize what they’re missing out on. The profit potential is enormous, as the pro-cannabis share of the world’s population is growing every day:

While ICC already has a firm foothold in these markets, the most exciting development has just recently been announced: ICC has inked a record-breaking deal in which they will acquire 49.9% of Wayland Group’s international assets. The cannabis industry has never seen a deal of this size or scope, and we’re proud to be among the first to report on this breaking news.

Upon closing the transaction, International Cannabis Corp. will control 49.9% of a German medical cannabis import license, as well as a three-year supply contract to provide 9,000 kilograms of dried cannabis flower to an established German-licensed importer and distributor of cannabis to over 2,200 pharmacies.

This is huge, as Germany is Europe’s number-one economy, with a population of over 82 million. The German patient population for medical cannabis is experiencing exponential growth, with over 79,000 patients now active, up from approximately 800 in 2017 – and ICC will now control a world-class production operation in the country.

I’ve been telling investors for years that you can’t just buy up American assets and hope for the best; that’s not a sustainable investing strategy. Your best bet in today’s market is to go global: prepare your positions in assets that will benefit from new cannabis policy and revenues in multiple continents.

Legal Notice:
This work is based on SEC filings, current events, interviews, corporate press releases and what we’ve learned as financial journalists. It may contain errors and you shouldn’t make any investment decision based solely on what you read here. It’s your money and your responsibility. Never base any decision off of our emails. Never base any decision off of our emails.Wallace Hill Partners LTD owned by the same members who own Future Money Trends, have entered into a three year agreement with International Cannabis, purchased shares, and have received three hundred thousand dollars.. This publication may provide the addresses or contain hyperlinks to websites; we disclaim any responsibility for the content of any such other websites. If personal advice is needed, the services of a qualified legal, investment or tax professional should be sought.