This could be where a

Everyone’s got their eyes on Europe’s energy crisis, on Ukraine’s developments, in its quest to fend-off invading Russia and on the threat of using tactical nukes in the region, meanwhile, the world’s 2nd largest economy is undergoing a disaster of their own, which may be even graver than anything we see in America, financially speaking.

The Chinese couldn’t have asked for a worst year, in terms of weather.

The Chinese are dealing with heatwaves and with draughts.

They also have a water crisis on their hands, which impacts agriculture and, keep in mind, many Chinese live day-to-day and water shortages are a matter of life and death.

The river that feeds more than 150 Chinese cities is the Yangtze, which is the life source of hundreds of millions of human beings and that’s a big deal.

If that’s not bad enough, the Chinese, which import lots of wheat and pork, are facing severe food inflation, as the West does, but, of course, the poorer the country, the more people’s income is devoted to food and that means many millions of Chinese are in a plight.

Putin may have Europe wrapped around his little oil finger, but China has even worst problems, because real estate, which is nearly a third of their GDP and economic activity, is in shambles.

The Chinese government has made their average person feel so safe about housing, because of the subsidies, the financial backing and the accommodative nature of their government programs, whenever the topic of housing came up that most Chinese people do not invest in stocks, but put everything they got into their home.

China, for lack of a better word, is a giant housing “house of cards,” pun intended.

What this means is that between all of these ghost towns and faltering/bankrupt real estate developers, deeply in debt and owing their customers, the regular folks that bought from them, money and apartments, this is a real mess, impacting most Chinese people.

In the bigger picture, when one looks at China, it is clear that the growth is slowing in a noticeable fashion.

It’s far less competitive and many companies are divesting out of it, moving to neighboring Vietnam, for example. With shipping costs as high as they are, many countries are now choosing to revive their domestic manufacturing capabilities, because who wants to rely on a country that closes a major port, when there’s one Covid case in an entire city?

Therefore, if you’re looking for the real issue, it would be if China, the world’s 2nd largest economy, can’t get a grip over its slowdown.

For now, its treasure trove of over $3.0tn in foreign reserves, will serve as their piggy bank and they must be dumping some dollars this week, because it’s tanking! 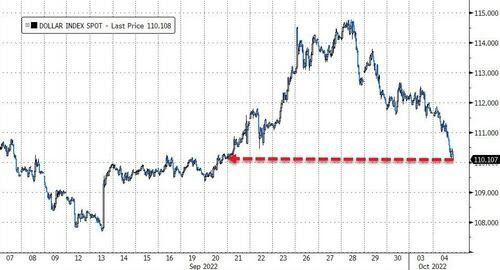 Lastly, I want to raise a crucial point to remember. The FED and other central banks may slow down the pace at which they’re raising rates and may even halt their programs, but they are still heavy sellers of bonds, which means that real buyers must lend governments and if you’re a real buyer, interested in market-beating returns, with sensible risk, you want a high yield for your loan.

To me, it seems rather clear that so long as central banks keep reducing the balance sheet, it’s almost like more rate hikes…

They serve the same purpose; re-introducing risk to the market and getting out of the business of propping-up equities.

As you can see, it’s working… 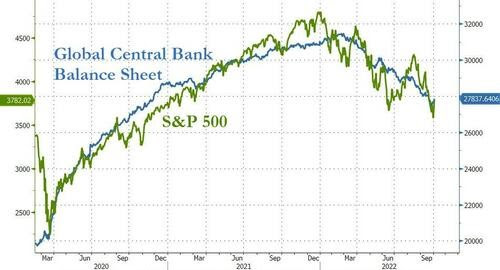