In 2010, one of the most failed basketball teams in NBA history, the Golden State Warriors, was bought out by new owners. Even with all of the faith and good intent in the world, I doubt that they could have imagined that 12 years later, the franchise would win 4 championships and be mentioned as a dynasty of the same caliber as the Chicago Bulls, Los Angeles Lakers, Boston Celtics, and San Antonio Spurs.

Kerr is a rare animal; a short white person, slim and not athletic, with only one skill set: he can shoot open threes.

Kerr played with Michael Jordan, Scottie Pippen, and Dennis Rodman while with the Bulls. He was under the best NBA coach in history, 13-time NBA champion Phil Jackson (2 as a player and 11 as HEAD COACH!). He then played with Tim Duncan under coaching legend Gregg Popovich for the Spurs.

Steve Kerr is rare for playing with the best players and coaches ever.

In his first year of coaching the Warriors, Kerr helped win them their first-ever NBA championship. The following year, the Warriors ended the regular season with a 73-9 record, the best (better than the 72-10 of the Chicago Bulls, whom he played for).

After losing in the finals to LeBron and the Cavaliers, which pulled an upset, becoming the first team to come back from a 3-1 deficit and winning the quintessential game 7 on the road, the Warriors dominated the league in 2017 and 2018, winning back-to-back championships before suffering a horrendous streak of bad luck in 2019.

Reaching the NBA finals in 2019 as clear favorites and with the potential of becoming an elite team that completes a three-peat (3 consecutive championships), their star players got injured one after another, costing them the title.

Kevin Durant injured his Achilles heel and demanded to be traded. Klay Thompson tore his ACL and Achilles’ heel, which kept him out for 2.5 SEASONS!

Steph Curry got injured and missed a full season as well, and the Warriors finished a season with 15 wins!

Everyone doubted them. Players asked to be traded, commentators laughed at the comparisons to great teams and dynasties, and then came 2022…

The Warriors just won their 4th championship in 7 years, proving that they have the DNA of elite players.

It was one of the most unlikely comebacks to go from battered, bruised, and injured with the sort of thing that forces other players to retire, yet Klay and Steph recovered and lifted the trophy.

The U.S. economy will come back from this inflationary nightmare, Bitcoin will most likely go on another bull run, and the stock market will surely be higher 2-3 years down the road.

Sports comebacks are rare, but the U.S. economy ALWAYS comes back stronger and better.

Basically, it’s about when it will happen, not if. 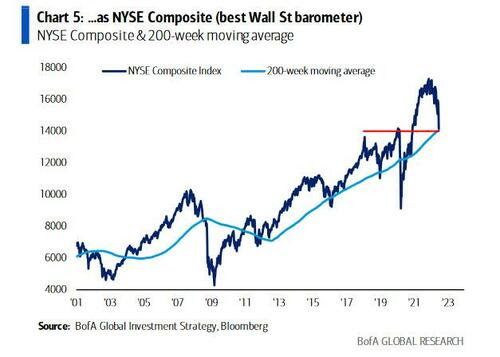 Cryptocurrencies are crashing, and stocks are on the EDGE!