Governments around the world are going to pump the markets higher than any of us can even fathom.

They don’t even have a choice: the entire pension system, socialized welfare state, and underpinnings of our debt-fueled economy are completely dependent on “more.”

One problem they will try to inflate their way out of is the ballooning pension bubble that has been built on sand, especially for any government-backed pension here in the U.S.

The ticking time bomb known as the pension crisis is happening right now, and it’s going to affect everyone regardless of age, location, or socioeconomic status.

As we might expect, the traditional mainstream media isn’t talking about this, and you certainly won’t hear the government or most politicians admitting there’s a real problem here. The implications of this are far-reaching, and I assure you that they will be devastating.

As its most basic level, a pension is a promise that retirees will be able to maintain their standard of living.

We’re not talking about real wealth here, but merely a promise of a baseline quality of life in exchange for years (and often decades) of hard work and loyalty. It’s a promise that keeps workers at the grindstone, putting up with backbreaking demands and tolerating exorbitant tax rates. Many retirees depend on pensions, and the government and corporate fat cats depend on the pension promise as a means of maintaining worker obedience.

This implicit compact between the workers and the corporations and governments has been somewhat sustainable for a while – or at least it would appear that way, but under the surface we can see a system that’s tearing at the seams. Retirees are living longer than they used to, and this puts a heavy strain on an already overburdened pension structure:

Extrapolating from current figures, it is projected that lifespans will increase, as will the percentage of the population currently in retirement. More retirees and more time spent in retirement mean fewer workers contributing to the pension fund pool and more people drawing from it. It’s a scenario that’s bound for implosion, impacting everyone involved.

The situation doesn’t look any better from the employer’s perspective. When a pension fund fails to generate sufficient returns to cover the promised payouts to the retirees (a scenario that’s happening more and more frequently), the employer is in the challenging position of having to make up the difference (or renege on its promise, which it is contractually not supposed to do). Thus, the employer (be it the government or a private employer) is often financially strained, and this is why we see some employers simply refusing to offer pension plans to new hires nowadays. This part of the American dream is collapsing, and the crisis is wreaking financial ruin upon businesses and individuals alike.

Another contributing factor to the impending implosion in pension funds is the declining birth rate.

The graph below starkly illustrates how the birth rate, both globally and in each region of the world, has literally been halved since the 1960s: 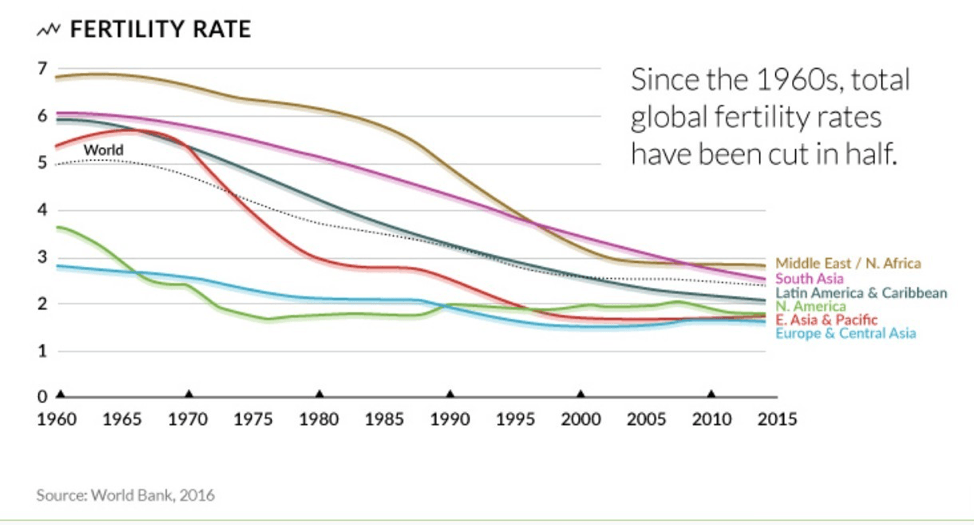 Ever since the baby boom, birth rates around the world have declined substantially, and there’s no end to the trend. The upshot of this is that the pool of young workers has decreased and will likely continue to do so. Once again, we have a situation in which fewer individuals are contributing to pension funds, while more people are taking from them.

If you’re looking to the government for a solution, don’t count on it.

In fact, government-funded pensions are in terrible shape, with state and local government pensions underfunded by trillions of dollars.

To keep the charade going a little longer, we can expect governments to take bigger risks with how they invest their pension funds – or whatever’s left in there, at least. This, of course, is a recipe for imminent disaster: governments are terrible at just about everything, but managing money might just be at the top of the list of things they’re bad at (which is saying a lot).

In the case of governments struggling to pay pensioners, it should come as no surprise if taxpayers end up footing the bill in the end. Workers’ required contribution rates are expected to increase as well. This is nothing more than a bandage on a fatal wound, though, in a structure that is insufficiently funded and bleeding money with no viable solution in sight.

When pension payments are replaced by IOUs and eventually by nothing at all, the populace will be up in arms, but it will be much too late.

Governments and large corporations should have economized and hoarded cash many years ago, before the problem snowballed and got completely out of control. It’s yet another example of the fat cats breaking their promises while the hardworking citizens get the short end of the stick.

Who can you count on to solve this problem? Ultimately, you’ll need to count on yourself: save money wherever you can, focus on cash flow, and position yourself for opportunity when the pension fund implosion claims its untold victims.

Keep in mind that conventional retirement isn’t even a century old. In fact, your retirement accounts like the IRA and 401(k) aren’t even 40 years old!

True financial prosperity comes from having no bad debt (consumption) and multiple streams of income.

Regardless of age, you can live a very free life by using money as a tool.

Cage the desire to overspend and use your savings to create more income for your life.