END OF AN ERA: It’s All About to Change

The Great Decline of the Dollar Standard

A major move in the currency markets is here, and it may be one of the biggest opportunism any of us will ever see in our lives. These types of major shifts happen every few hundred years, and we’re on the edge of one happening right now.

While there’s no shortage of commentators painting bleak scenarios for the future of America as a world power, it’s not often that we hear such a dark assessment from a figure as prominent as Bridgewater founder and the world’s largest hedge fund manager, Ray Dalio. And while he doesn’t say it directly, Dalio makes it quite evident that he envisions a precipitous end to the hegemony of the U.S. and the dollar.

The implication provided by a recent LinkedIn blog posting by Dalio is that China will overtake the United States as the world’s dominant superpower in multiple areas: “1) innovation & competitiveness, 2) domestic output, 3) share of world trade, 4) financial-center size and power, 5) military strength, and 6) reserve-currency status.”

Dalio waxes philosophical – almost wistful – in his eulogy for the American empire and his suggestion that China will (sooner than most of us expect) reclaim its place as the world’s most powerful nation. Evidently, given the current trajectories, it won’t be long before the U.S. and China switch positions in the rankings: 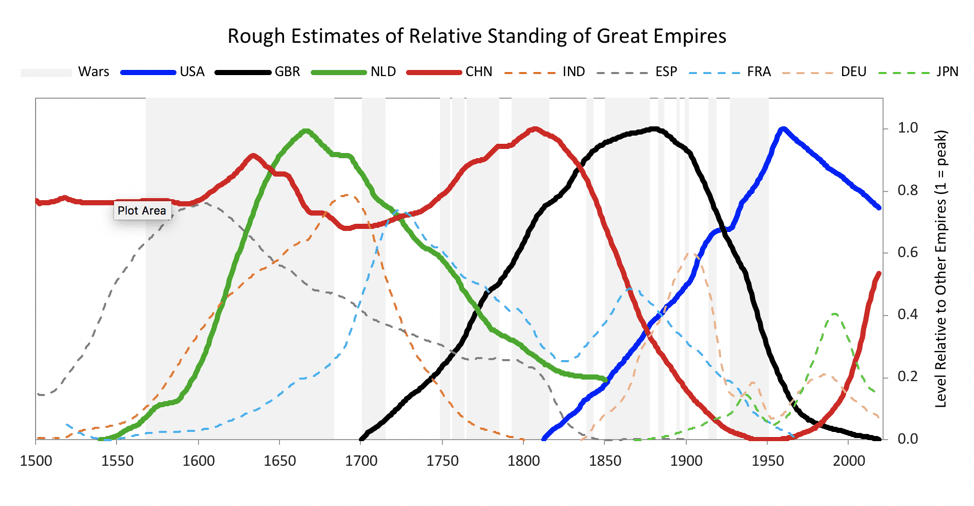 In explication of the foregoing graph, Dalio notes that “China was either the number one or number two most powerful country from 1500 to at around 1800 when it went into relative decline that continued until around 40 years ago.” While Dalio doesn’t provide an explanation for that decline, he does explain China’s current ascent as “largely the result of China’s powerful culture and its reforms.”

Dalio is clearly looking far beyond short-term trade negotiations in his assessment; centuries of history are his guide to the future of this macro-scale game of “king of the hill.” Thus, Dalio asserts, “while trade deals can be made, attempts to change the top-down government management of most/all aspects of the system pursuit of making China as great as it can be—won’t work.”

In downplaying current issues like the trade war, Dalio seems to be issuing a warning to younger generations; in particular, he wants our current and future voters and policymakers to know that “China has a culture and system that has worked well for it for a long time so it shouldn’t be expected to change much” and that “China is a place we need to continue to evolve with and invest in.”

Through words and charts, Dalio strongly implies that China is on the cusp of a new dynasty with its concomitant economic and military strength:

You might agree with him or not, but suffice it to say that Ray Dalio’s a pretty smart guy and he’s done more than a modicum of research on this topic. And in a turbulent and ever-changing world, Dalio’s words, albeit unsettling, hold more weight now than ever.

Legal Notice:
This work is based on public filings, current events, interviews, corporate press releases and what we’ve learned as financial journalists. It may contain errors and you shouldn’t make any investment decision based solely on what you read here. It’s your money and your responsibility. The information herein is not intended to be personal legal or investment advice and may not be appropriate or applicable for all readers. If personal advice is needed, the services of a qualified legal, investment or tax professional should be sought.

Never base any decision off of our advertorials. Future Money Trends stock profiles are intended to be stock ideas, NOT recommendations. The ideas we present are high risk and you can lose your entire investment, we are not stock pickers, market timers, investment advisers, and you should not base any investment decision off our website, emails, videos, or anything we publish.  Please do your own research before investing. It is crucial that you at least look at current SEC filings and read the latest press releases. Information contained in this profile was extracted from current documents filed with the SEC, the company web site and other publicly available sources deemed reliable. Never base any investment decision from information contained in our website or emails or any or our publications. Our report is not intended to be, nor should it be construed as an offer to buy or sell, or a solicitation of an offer to buy or sell securities, or as a recommendation to purchase anything. This publication may provide the addresses or contain hyperlinks to websites; we disclaim any responsibility for the content of any such other websites.  Please use our site as a place to get ideas. Enjoy our videos and news analysis, but never make an investment decision off of anything we say. Please review our entire disclaimer at FutureMoneyTrends.com