My friend Gary Christenson recently wrote a must-read article. I wanted to pass it along to everyone at FutureMoneyTrends.com.

This is not a sponsored email, it really is me just forwarding you something I think you should have a look at.

P.S. It states in his article that he was sponsored by MilesFranklin.com, who is also a good friend of mine and happens to be where I purchase all of my own precious metals. I have no financial ties to either Miles Franklin or Gary Christenson’s Deviant Investor.

Silver: Supported by D.C. and the Deep State

Posted on November 15, 2018 by Gary Christenson

Miles Franklin sponsored this article. Gary Christenson wrote it, and the opinions are his.

The U.S. Government and the Deep State are monster porkers. Government runs on dollars, debt, and devaluation. It spends too much supporting corporations and cronies and buying votes. The Treasury issues debt to fund the revenue shortfall. Prices rise and devalue dollars, just as they have since 1913. 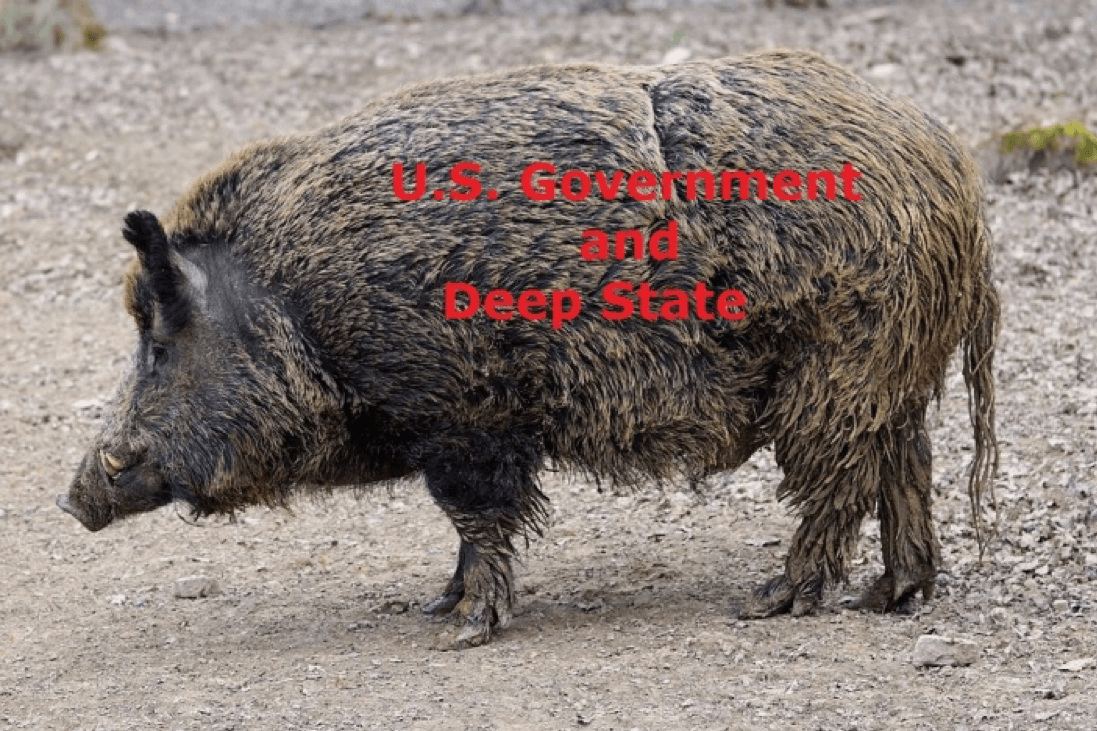 The ever-expanding debt feeds dollars into circulation. Those dollars levitate stocks, bonds, real estate, and/or commodities. Stocks have rallied since 2009, bonds have since the early 1980s, and real estate has reached bubble territory again in 2018. Commodities have been weaker for five to ten years. The Deep State, Federal Reserve, and U.S. Government want rising stock and bond markets because they increase wealth for the political and financial elite. They have created a “borrow, spend, blow a bubble, let it collapse, and rake in the spoils” game, and it will not change easily.

What Does This Have to Do With Silver?

The Deep State demands more dollars for the military, missiles, bombs, and computers. Military hardware requires millions of ounces of silver. Silver prices must rise unless:

The Deep State, central banks, and governments will not abandon their control over the economy and the populace, and they will support the political and financial elite at the expense of the bottom 90%.

From Ellen Brown:
“Their [central banks] US and global holdings [of stocks] are so large that their withdrawal from the market could trigger another global recession. That means when and how the economy will collapse is now in the hands of central bankers.”

The Dow Jones Industrial Average (Dow) is composed of a changing group of 30 stocks. Survivorship bias boosts the apparent growth of the Dow. Compare the Dow and silver prices for over a century. 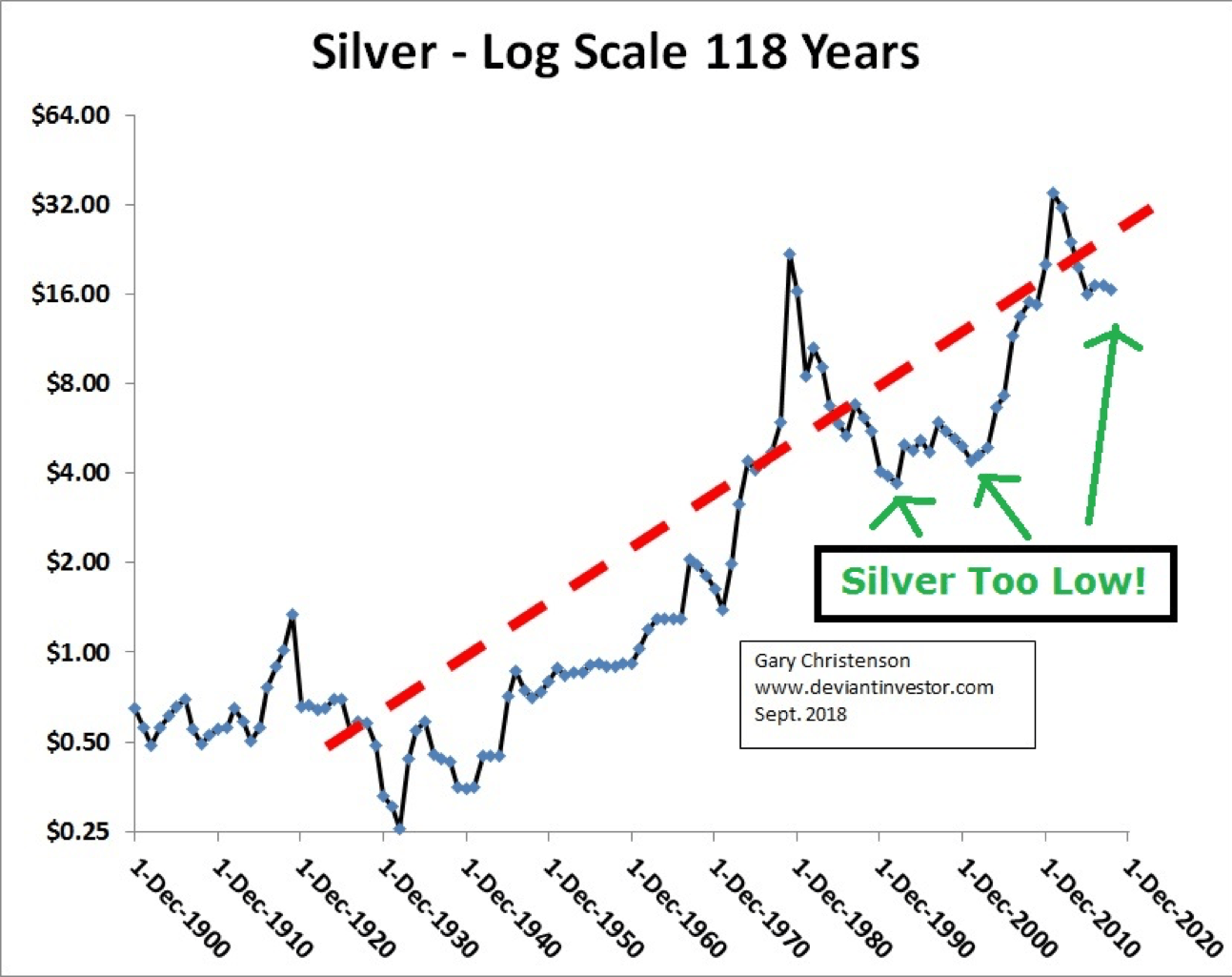 Is silver high or low in 2018 compared to the Dow?

The Dow rises as dollars purchase less. Silver prices also rise faster or slower than the Dow. Based on a century of data, the ratio shows that silver prices were too high and vulnerable to a collapse in 1980 and 2011.

Silver is necessary for military, computer, and medical applications. Investors often prefer silver bullion and coins because they don’t trust government, the Deep State, or the Federal Reserve to protect the value of currencies. Investor demand for silver will rise as central banks and politicians lose credibility. Expanding wars will increase demand for silver. Rising energy prices will escalate mining costs. The price of silver has little downside risk and considerable upward potential, perhaps to triple digits within a few years.
Examine the “more of the same – borrow and spend” log-scale trend for silver prices below. 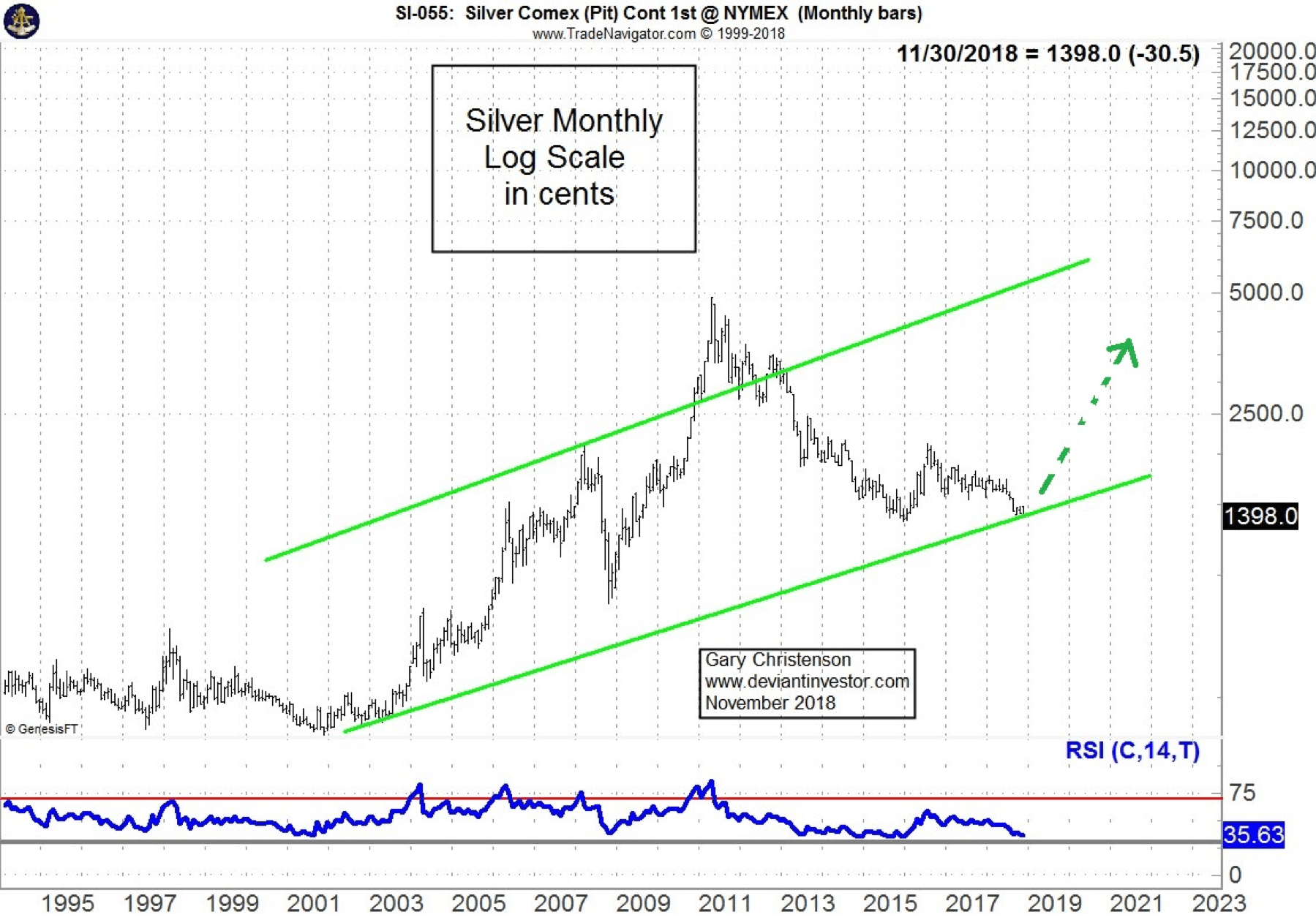 But a “blow-off” silver price rise is also possible. One likely stimulus is a market correction/crash followed by massive QE. This graph shows a possible “blow-off” rise for silver prices. 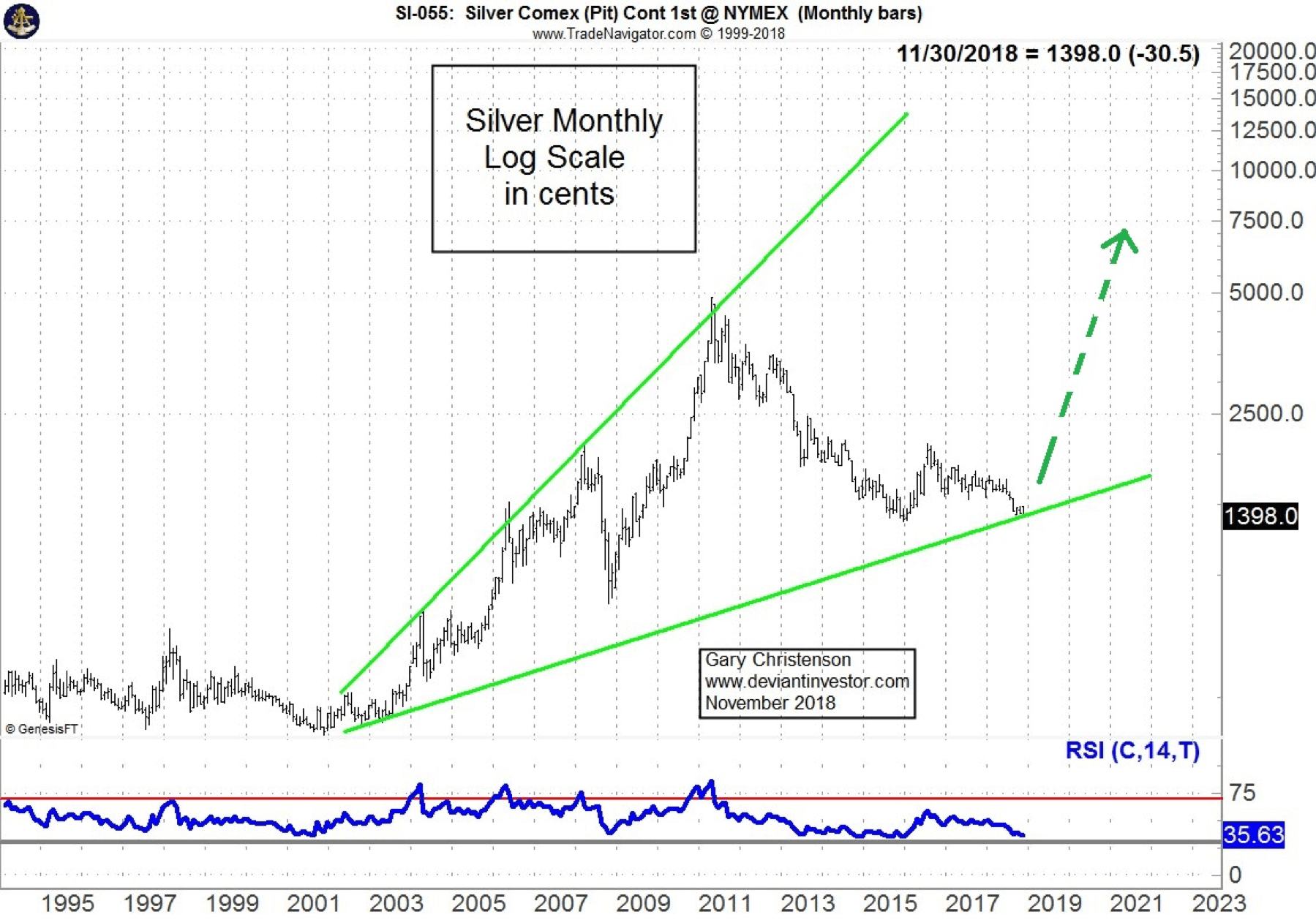 “We’re going to see quantitative easing in our future on a scale that will shock everybody.”
CONCLUSIONS:

Miles Franklin will recycle devalued dollars that were issued as a liability of the Fed into real money: silver. The risk is minimal.