The Bounce is Already $43/ounce OVERNIGHT

2022 is shaping up to be a year of fixing many of the issues that the healthcare crisis and the governmental and monetary responses to it, birthed.

When, exactly two years ago today, on the 17th of March 2020, images from China and Italy caused such public panic that governments felt it would not be seen as authoritarian or dictatorial to impose strict lockdowns, self-isolation measures and quarantines (when I say the public wouldn’t view it as trampling on their liberties and rights, I mean by the majority… some viewed it as the end of freedom), the global economy transformed overnight.

Getting a haircut became impossible, because it entailed leaving the house. Basic services that we are accustomed to in the western world turned temporarily unlawful and to compensate for that, the consumer focused on products mostly.

Shipment of goods between countries was an ordeal, but that’s what people wanted, in the face of these colossal restrictions on their ability to move and enjoy their surroundings.

Powell rationale was that as the world’s population, at large, got vaccinated and governments started to relax and ease the restrictions and as more people felt safe going back to work, the balance between goods and services would tilt back to normalcy, ports would begin to enjoy less congestions and more smoothly-operating days and we’d see inflation coming back to its 2.00% long-term objective.

The FED waited, just like a person waits on a date, because admitting that the other party isn’t coming means closing the door on this chapter.

At first, the hope that vaccinations would make people rush back to work was alive. Next, it was the promise of a fat budget for the Build Back Better plan or the government coming up with proactive regulations and incentives, but just like it’s a joke to wait on a date for more than an hour, Powell can’t wait on the world.

Raising rates is a good thing and the responsible thing to do. 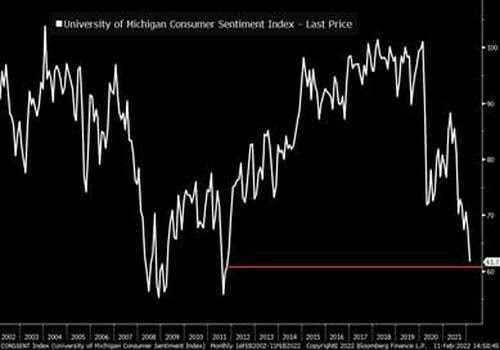 The consumer is acting like there’s a recession on the horizon and this policy decision from the FED will first ease financial conditions in the markets (as you saw yesterday), because the markets really wanted Powell to lay off the paddle and it will filter into the real world, by cooling off the unsustainable price increases in housing.

Consumer sentiment is great for understanding psychology of the economy; when the consumer is bummed, the conditions are ripe for better times ahead.

If, at the end of 2021, hedge funds were not in tune with reality, admitting they are overweight stocks, even though the justifications were weak (in other words, they were just waiting on a reason to sell), today the situation is the opposite: 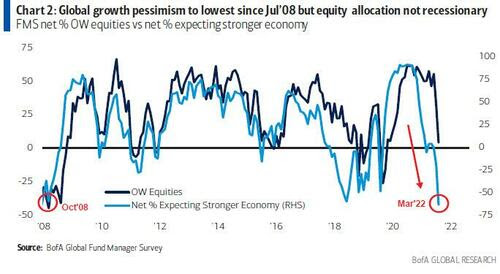 Wall Street was ULTRA-BEARISH going into yesterday’s FED announcement, but Powell told them, point-blank, that there is no recession forecasted.

Once Wall Street truly becomes convinced of this recovery, the markets will rally HARD and most will say that it is a “violent bear market rally” and miss out.

Seven rate hikes, lots of inflation, a tight labor market that is on its way to normalizing and a war in Ukraine; there’s enough to worry about, even without a recession — BUY STOCKS!

Oh, and about gold… I couldn’t sleep because gold looks primed for getting back above $2,000 and onto new ATH (all-time highs)!

HUGE GOLD UPDATE on our next publication.