In order to drive out the Soviets from Afghanistan in the 1980s, U.S. politicians had the “brilliant” idea to train and arm Freedom Fighters. Two decades afterward, offshoots of those ethnic and ideological groups detested the West and their imperialistic aspirations and deduced that terrorism was the only way to stop the spread of America into the Middle East.

U.S. politicians, who took Afghans under their wing when they needed them to fight the Soviets, now flipped on them and started a 20-year war against them.

In politics, as I’m sure you’ve learned via YouTube by searching something like “Hillary Clinton Lying for 10 Full Minutes” or other viral videos of Biden, Obama, or Bush flip-flopping or confronted by media (the late Donald Rumsfeld is another example), politicians will change their stance on almost any topic that isn’t a core one if their constituents have changed their minds since it gets them more votes to be popular.

For years and years, the national debt topic wasn’t a burning one, but with consumers complaining that they’re experiencing the worst buying conditions in 40 years, it’s a big subject of debate all of a sudden as to whether or not government overspending has gone too far.

While big businesses can find ways of reacting to inflation, small businesses get absolutely crushed by it. 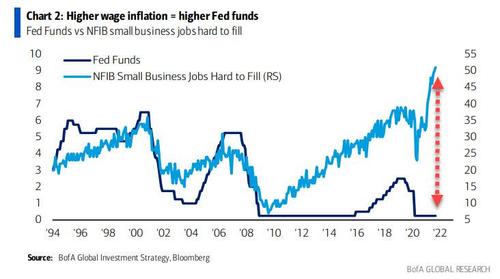 As much as the FED tries to be nonpolitical, it’s certainly under pressure from Washington, so while it always declares that it won’t succumb to Congress and works strictly by its fact-driven approach, I think it will also need to alter its approach to inflation to be a bit more aggressive.

Even as much as I believe that this will be a pretty aggressive rate hike period, the most I can envision rates going to on the FED Funds Rate is 2.25%, like in December 2018.

Even if that’s what happens, stocks are in TINA (“There Is No Alternative”) mode!

Rates going up do hurt real estate prices, but I don’t see a crash of any meaningful magnitude since the entire millennial generation is buying homes right now and banks are ready, able, and willing to lend.

Most investors buying cryptocurrencies do it as an inflation hedge, so it will probably continue to perform well in the months ahead, but the only sector that has been lousy and depressing in 2021 and fits perfectly into this new inflationary-acknowledged environment is gold. 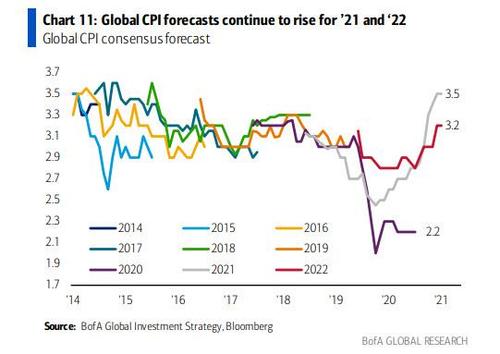 It’s now popular to attack spending from both sides of the political aisle. It’s now okay to preemptively stop inflation because the risk of deflation is gone!

I’ve written hundreds of articles in my career, but I can count on one hand the number of letters that were as pivotal as this one.

The inflation topic changed on Wednesday and all we have left to wonder is just how much gold will go up, not when or if.