Donald Trump authored a book called The Art of the Deal. In it, he lays out his philosophy on business and, MORE SPECIFICALLY, on negotiations.

I want to analyze a number of KEY QUOTES from the book since they serve as a benchmark for what we’re about TO SEE NEXT:

In this quote, President Trump is emphasizing the benefits of BEING CONTROVERSIAL over being boring. He chooses the latter and we believe that he definitely took this business approach into the presidency.

Virtually anything he does has a twist to it that inspires news commentators and headlines. 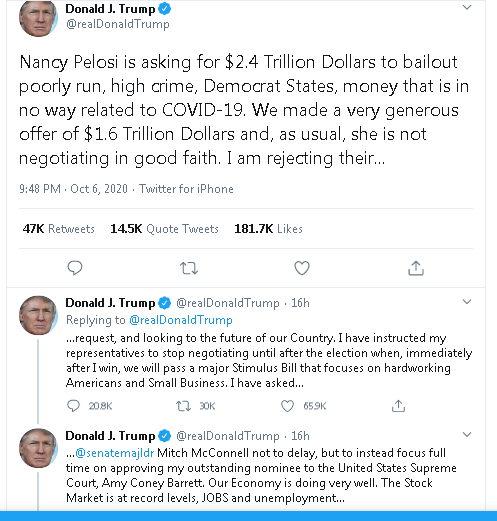 This Twitter blast SPOOKED MARKETS in a way that was nearly instant. Trump is deploying another strategy that he shared in the book, which is that WHEN NEGOTIATING, you must be willing to say “NO” and to stand your ground.

It’s probably second nature to him, so investors who do not know HIS PLAYBOOK believed this was the end of it, but these are more like OPENING REMARKS.

The whole world has seen COVID-19 shock small businesses, large corporations, and anything in between.

People have been talking about the reset for decades. To us, this was A HUGE RESET — this was it.

There has been an UNPRECEDENTED EFFORT by all governments to weather through this crisis, and the GLOBAL RECOVERY could usher in a period of prosperity NOT SEEN since the end of WW2.

Don’t think in terms of doom and gloom – THINK REALITY.

I own a large amount of physical precious metals. In my opinion, their price will continue to rise over time, so I’m actually COMPOUNDING MY SAVINGS, but what the gold bugs MISS OUT ON is that all they do is HOPELESSLY WAIT for equities to suffer an 80% crash that may or may not occur once every 50-100 years. In the meantime, they aren’t IN THE GAME of equities and real estate, which is a shame, since asset prices are ON A TEAR. 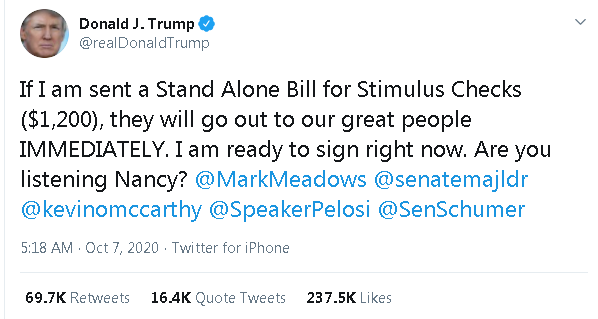 Politicians around the world are operating under IMMENSE PRESSURE to ease, monetize, and stimulate their economies. They are on the brink of SOCIETAL MAYHEM if they don’t!

Everything is RIGGED IN YOUR FAVOR; the market is signaling to you that a massive growth period is ahead of us. We’d SHUT DOWN the global economy, and it doesn’t get MORE DIFFICULT than that, so the contrarian bet is to be engaged, not await some DREADED SECOND WAVE that may never come.

The U.S. will support and stimulate, China will do the same, and Europe will follow suit.

It takes a UNIQUE INDIVIDUAL to actually walk the talk of this great quote. This is literally the essence of being a shark in business, but in order to GET IT DONE, the other side must really like you (since they’re conceding), be distressed (in a weak spot), or be intimidated (Trump applies massive leverage).

It’s easier said than done, but we shall see how Trump makes this quote a reality and IF he is able to get the deal pushed through because Americans are OVERWHELMINGLY SUPPORTIVE of more fiscal stimulus.

Trump is going for it and you’re either going to HATE HIS GUTS or be a raving fan; very few are in between.

We believe that in the next ten years, the business opportunities that this “new normal” will present are going to create wealthier people than Jeff Bezos.

Get in the game NOW!