It’s sad to say, but few people in the mainstream media truly understand the sheer scope and size of the cannabis market. It’s not only happening in the United States and Canada – granted, those are huge markets, but it’s really a global phenomenon, and there are plenty of untapped markets.

Consider Europe, whose population is twice the size of North America, and yet their cannabis market is miniscule in comparison. However, the demand is there: Europe wants the product, and it’s just a matter of the right company getting a foothold in key regions.

As an investor, your options have been limited if you wanted exposure to the European legalized cannabis market. It’s hard to find a company with an experienced team, the necessary connections, and access to funding. We did find one company, though, that’s making a big move into this highly promising market.

The company is known as ICC International Cannabis Corp. (CSE: WRLD.U, OTC: WLDCF), and they have cannabis assets in multiple regions of the world, including the European continent:

What my research team just uncovered is a hot-off-the-press news release stating that ICC has agreed to acquire 49.9% of Wayland Group Corp.’s international assets and license portfolio. The European operations, partnerships, licenses, and asset exposure will be massive for ICC as a result of this acquisition.

Through ICC’s exposure to nearly half of Wayland Group Corp.’s international asset and license portfolio, they’ll begin to generate revenues from massive and highly lucrative German and Swiss facilities. ICC’s production facilities in these regions can produce tens of thousands of kilograms of premium cannabis product: 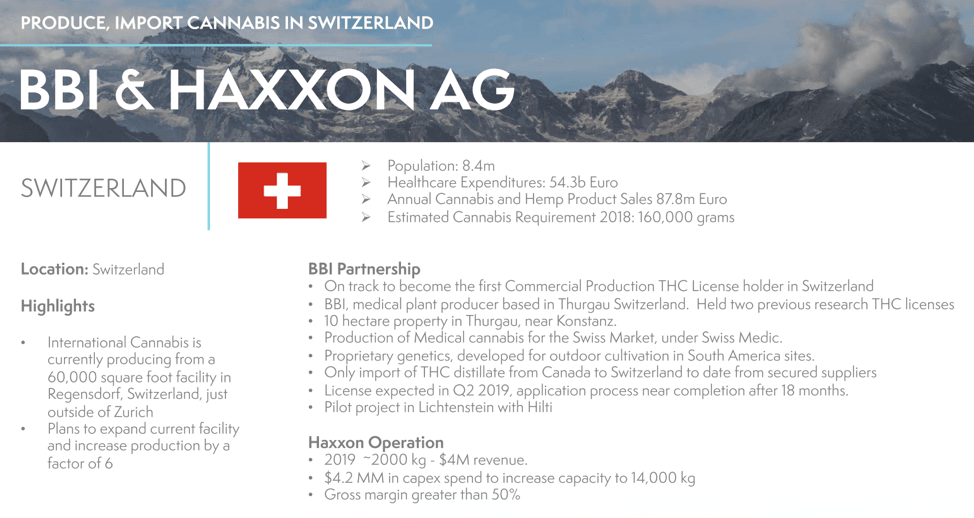 The strategic partnership with Wayland will supply ICC with 10,000 kilograms of EU-GMP certified product per year, for a total of 30,000 kilograms. ICC will also acquire distribution or supply agreements with over 39,000 corporate and independent pharmacies, plus a whopping 820,000 square feet of clean room cultivation space.

This partnership is nothing less than groundbreaking, as it will provide International Cannabis Corp. with licenses in 12 countries across 4 continents. You just don’t hear about companies with this level of reach and access, especially outside of North America. All told, ICC will have access to a total population exceeding 390 million people as well as international markets comprising more than a billion people.

We’re not just standing by and watching International Cannabis Corp. make history; we’re taking a position today in WRLD.U/WLDCF shares. It’s the only way to get this depth of exposure to the next frontier in the worldwide legal cannabis market.

Never base any decision off of our emails. FutureMoneyTrends.com stock profiles are intended to be stock ideas, NOT advice. The ideas we present are high risk and you can lose your entire investment, we are not stock pickers, market timers, investment advisers, and you should not base any investment decision off our website, emails, videos, or anything we publish.  Please do your own research before investing. It is crucial that you at least look at current SEC filings and read the latest press releases. Information contained in this profile was extracted from current documents filed with the SEC, the company web site and other publicly available sources deemed reliable. Never base any investment decision from information contained in our website or emails or any or our publications. Our report is not intended to be, nor should it be construed as an offer to buy or sell, or a solicitation of an offer to buy or sell securities, or as a recommendation to purchase anything. Wallace Hill Partners LTD owned by the same members who own Future Money Trends, have entered into a three year agreement with International Cannabis and have received three hundred thousand dollars and eight hundred thousand shares paid for directly by the company. We will not sell any shares during any email marketing campaigns. This publication may provide the addresses or contain hyperlinks to websites; we disclaim any responsibility for the content of any such other websites.  Please use our site as a place to get ideas. Enjoy our videos and news analysis, but never make an investment decision off of anything we say. Please review our entire disclaimer at FutureMoneyTrends.com/disclaimer.