Should You Sell Out?

When I’m watching television, I usually love to immerse myself in quality documentaries or inspiring stories based on true events.

When I was younger, I used to love National Geographic, but after high school, I decided that not having a TV set in my house is best.

I was dead broke, without any means, and with no parachutes to fall back on. Even though I love to consume content, I made the sacrifice to throw it away.

My father, though, is a TV junkie. After retiring, he started to watch National Geographic and became addicted to the show “Mayday.”

The show’s most common name is Air Crash Investigation or Air Disaster.

If you’re not scared of flying commercial planes, watching enough episodes of this program, which examines crashes, near-crashes, hijackings, bombings, and other disasters, might do it.

What they do on the show is reenact the events with computer-generated imagery and interview the survivors, aviation experts, retired pilots, and crash investigators in order to explain how the emergencies happened and better understand what needed to be done to prevent the tragedies from ever occurring.

The reason is that it distorts reality by convincing your mind that these accidents are frequent when they’re really not!

Major airlines experienced one onboard fatality and a fatal accident rate of 0.005 per 100,000 flight hours in 2019, for example.

So, when I am sent countless interviews, charts, and graphs showing why the next disaster is right around the corner, I’m reminded that if one only listens to doom and gloom, they will fail to realize just how efficient and futuristic the world really is.

The Hindenburg Omen, for instance, is a technical indicator that happens before each and every market crash!

It compares the number of new 52-week highs and new 52-week lows in stock prices and is supposed to provide forewarning before huge corrections.

The thing is that it is only right 25% of the time.

A second very common fear that I constantly hear about is that one should not invest if markets are trading at all-time highs, but that’s impossible. If someone avoids buying great businesses just because the index happens to be at a record high, they would lose an absolute fortune over the course of a lifetime.

Since 1950, the market has hit all-time highs on one out of every thirteen trading days!

In other words, if three weeks have gone by and we haven’t seen new highs, this is rare.

On top of that, if I had the trading days when markets were hovering near the highs, within 1% of them, I can tell you that this rises to a fifth of the time!

In other words, markets should hit new highs or hover around the highs at least once a week, so keeping that in mind, my point is that the really devastating crashes don’t just occur because of valuations being high, but rather because of massive scandals and black swan events.

The data supports this: 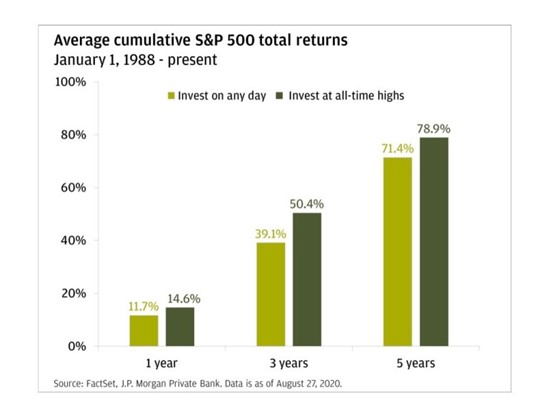 The bottom line is that unless you’re being reckless and using all sorts of shortcuts to invest, like crazy leverage or exotic options, you should not be concerned about a wealth-creating strategy (buying stocks) that works 75% of the time (three out of four trading days are green) and hits a new record high every two weeks.

Markets do crash and there is risk, but time smooths this tremendously.

If you’re putting money to work with great companies at good prices, the chances are you’ll be richer for it.