I had a mentor in the wealth building from the beginning, a real guide who had successfully built a real estate empire.

He’s been an extremely private individual in the wealth space, and he’s honestly the smartest person I know.

Since the founding of Future Money Trends in 2010, I’ve asked him nicely to commit to writing a letter a week for us. To my disappointment, he’s always said no thanks.

That is all until now. Like Ray Dalio, he’s committed to spending the last part of his life teaching, giving, and sharing what he’s learned with others.

More importantly, he told me this… “Maybe 3 years, Dan, 5 if we are lucky, and then we are going to see the largest asset collapse in the history of humanity. The only solution is helping as many individuals as possible prepare for an extreme economic winter and set them up to prosper, as this will be the largest wealth transfer since World War II.”

For years, other major publishers have tried to recruit him as a “guru,” and he’s declined them all.

Luckily for us, he knows me personally and is a dear friend.

Please read the first letter he’s agreed to let us share with you.

If You’re Not Preparing for This, You’ll
Most Certainly be Poor by the End of It!

Prior to World War I, it took 4.2 German marks to purchase one U.S. dollar.

Venezuela was 4-to-1 on the exchange of bolivars to dollars not too long ago. Today, it’s essentially a dead currency.

All of this happens slowly and then changes in an instant.

Since 2001, the national debt has gone parabolic, and there is zero chance it will reverse course. 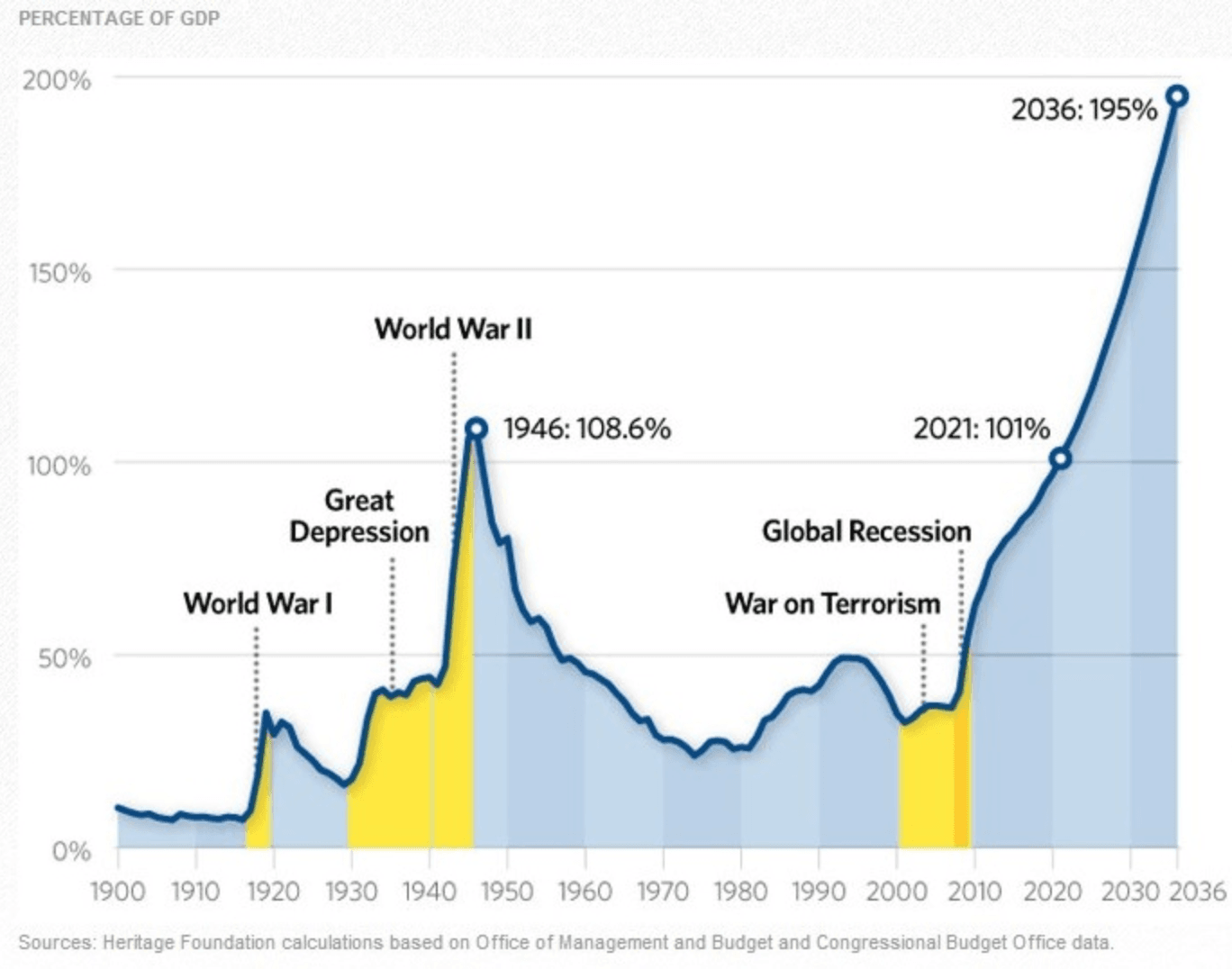 In the short-term, the economy benefits from deficit spending. Borrowed prosperity drives economic growth, putting voters in a good mood, and it helpsconsumers purchase what they can’t afford.

What does this all mean for us as investors, parents, residents of North America, anyone with ties to the U.S. economy (basically everyone reading this)?

1. It is a certainty that the Social Security Trust Fund won’t have enough money to cover the retirement of the baby boomers.

2. The debt will only grow until it can’t anymore, and then what?

3. Much of what we perceive as normal is actually an illusion of prosperity.

Not everyone went broke when Germany suffered through hyperinflation.The same is true for Zimbabwe, and even Venezuela.

In fact, some of the largest fortunes were amassed during both the German hyperinflation and the U.S. Great Depression.

The people who see the writing on the wall and are asking themselves the right questions are going to make a bloody fortune over the next 3 to 5 years.

I’ll address the 3 certainties above in my next letter.

Never base any decision off of our advertorials. Future Money Trends stock profiles are intended to be stock ideas, NOT recommendations. The ideas we present are high risk and you can lose your entire investment, we are not stock pickers, market timers, investment advisers, and you should not base any investment decision off our website, emails, videos, or anything we publish.  Please do your own research before investing. It is crucial that you at least look at current SEC filings and read the latest press releases. Information contained in this profile was extracted from current documents filed with the SEC, the company web site and other publicly available sources deemed reliable. Never base any investment decision from information contained in our website or emails or any or our publications. Our report is not intended to be, nor should it be construed as an offer to buy or sell, or a solicitation of an offer to buy or sell securities, or as a recommendation to purchase anything. This publication may provide the addresses or contain hyperlinks to websites; we disclaim any responsibility for the content of any such other websites. We have been compensated by Gold X three hundred thousand dollars for online marketing. We also own shares of Gold X purchased on the open market and their recent private placement. In the future, we may be buying or selling shares without notice. Assume we could be selling shares if you’re seeing this thirty days since its publishing date. Please use our site as a place to get ideas. Enjoy our videos and news analysis, but never make an investment decision off of anything we say. Please review our entire disclaimer at FutureMoneyTrends.com