No Turkey for Christmas

In less than half of the average time it takes to reach a 40% rally in the S&P 500 from when a bear market ends, the index is already reaching record milestones for appreciation.

The incredible demand for owning equities, exemplified by the millennial and Generation Z demographics, which have transitioned to the world of cryptocurrencies as well, has been a real surprise.

Once thought of as demographic groups that would have nothing to do with equities, they’ve shown animal spirits.

As you know, what’s really unique about them is how quickly and efficiently they share information with each other on various communication platforms.

If one wanted to learn about any stock market concept, system, specific ticker, or any financial topic, a long list of resources is available to him.

We believe that Wall Street doesn’t truly grasp the speed at which millennials become familiar with topics. 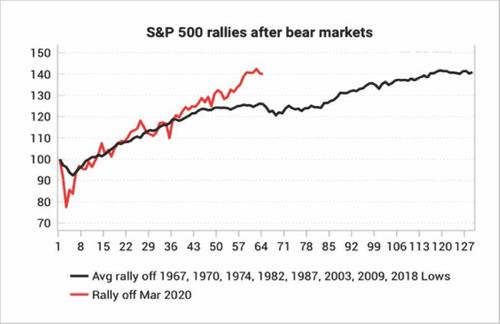 Knowledge and information are not the issues any longer.

If you want to learn any subject, the research is there.

The game has changed and the puck has moved to accessing serially successful insights from reputable sources.

In other words, there are fewer “scoops” than ever before. News outlets aren’t rushing to be the first to report on developments because any person with a camera on their phone can become a journalist, live streaming from the scene.

Where the value is generated is in correctly interpreting what’s going on. 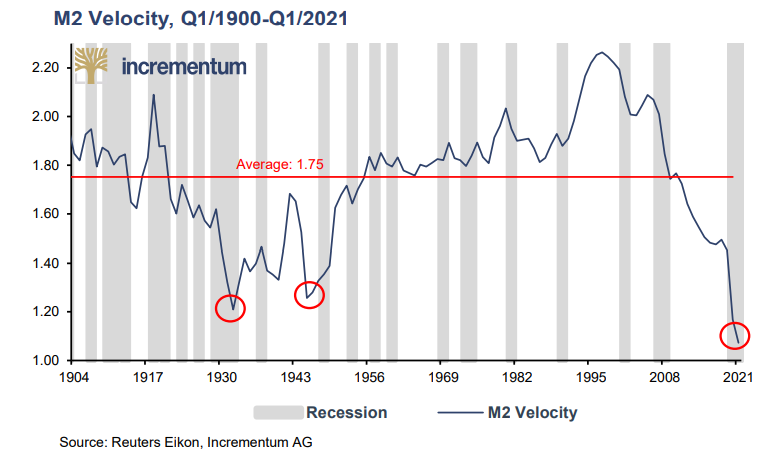 Janet Yellen is now making the rounds, explaining that inflation is good and that this is exactly what we want to see in the economy.

Because of the tremor that investors have with regards to inflation and the possibilities that it might get out of control, Janet Yellen and Jerome Powell are now in a mad rush to cool everyone down about the threat of higher inflation.

The new spin is that inflation and higher interest rates are exactly what the U.S. economy needs to flourish.

Yellen has also blamed Congress for being too conservative, citing that the inflation-adjusted budget has not changed in over a decade!

As you can see above, the velocity of money in the United States is the lowest it has ever been.

Had velocity of money jumped to historic levels, it would be healthy inflation since the amount of currency in existence has gone vertical last year.

We believe Yellen is using doublespeak to disguise the lack of real resolve on the part of the Federal Reserve that the policies the government has implemented, along with the public’s reaction, will be anywhere close to constructive.

This is why the upcoming FOMC meeting in the middle of the month has so much riding on it.

The market is looking for direction when it comes to when the FED will tighten. For now, it isn’t concerned that it will happen sooner than expected.

Let’s see if the market bites…