Klaus, if you have any friends and one of them happens to share this with you, I want to tell you that you’re probably one of the worst economists to ever live and I have no idea how you got to where you are.

China is not a role model; it is like a freight train, which can’t see the tracks are ending and that they’re headed to oblivion.

If any high-ranking American politician is reading this, know that China doesn’t pose any real threat… in fact, the greatest danger China faces is not that Taiwan will grow ever-nearer to the West, but that China’s population will LOSE around 800 million people, between now and the end of the century.

China, for a lack of a better world, is DYING.

In 2010, China’s population began shrinking and by the year 2100, it will consist of roughly 600 million human beings, a far cry from today’s 1.4bn souls.

During the 1-child policy era, the government mandated 336 million abortions!

Today, a Chinese woman delivers 1.15 children during her lifetime and that is lower than in Western Europe and Japan!

Xi Jinping is trying everything under the sun to rectify the situation, but for the life of him, he can’t force people to have children (I hope he can’t).

The CCP is incentivizing women with tax breaks, with discounts on housing, with longer maternity leaves, with new work rules and I’m sure they will that more is coming, if these won’t do, because it is, by far, the great threat to Chinese dominance in Asia.

The growth engine that was China is no more.

Stop thinking about as a potential threat to U.S. dominance, because it is not and while it is still growing, its aging population is a disaster in the making.

Wake up, Klaus, or you’ll be forced to change your name to Clown.

They’re chocking the lifeblood of credit and liquidity.

Only the strong and healthy will survive: 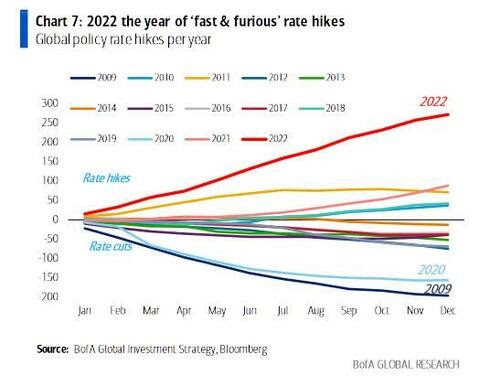 My point is that just like people expect China to keep growing for decades to come, which is a total bullshit narrative, they also have formed this delusion that central banks are tasked with making investors money, which is dangerous thinking!

The FED could care less about making you money; true, they want Americans to enjoy prosperity, but not as a national priority over making sure prices are stable.

The Federal Reserve really screwed up and to mend this wound will take one more year, at the very least.

2023 will be another tough one; these will be some of the toughest mental conditions you’ve had to face, so chin up and stay ferocious and focused.

It will get worse before it gets better.