It was Michael’s third jump that day. He meticulously checked his equipment again and again before strapping it on, and on the way to the plane, he made sure everything was 100% safe and ready. In terms of preparation, he was on top of it.

He jumped with another skydiver and opened his main parachute at roughly 2,000 feet, but as soon as he did, he immediately began spinning wildly over Lake Taupo in New Zealand.

The parachute was caught on something, and the spin was so turbulent that he tried to cut himself away from it. Doing that allows one to open the reserve chute in time, but he couldn’t disconnect, which meant CERTAIN DEATH.

Here’s the footage from his GoPro!

Michael was 25 years old at the time with 7,000 successful jumps under his belt, but he had never faced a situation where the main parachute didn’t disconnect. He tried to reach for his knife but the spin was too fierce to achieve that, so he pulled the reserve. It did NOTHING.

In his video, you can hear Michael waving and saying that he’s about to die, saying his goodbyes. He had accepted his fate.

Michael didn’t die that day. He landed on blackberry bushes that were so dense that they cushioned the blow and he was knocked unconscious.

Michael believes that because he was so relaxed going into the fall, knowing that it was out of his hands, his body was able to absorb the blow better.

Michael recovered from his injuries and resumed skydiving again, his great love and passion.

The blackberry bushes are the Federal Reserve and the federal government. Even though jumping from an airplane, entangling your main parachute, and not being able to use your reserve looks like certain death, there is a way to survive and get back in the skies after a speedy recovery. Klaus Schwab is determined of resetting everything, but he is in the monority and won’t get his way!

We are now entering that phase of the hard landing, the one that nobody likes: the landing itself. 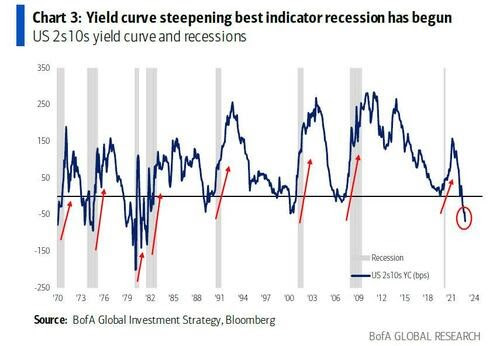 The indicator that foresaw every previous recession in the past 50 years has flashed, but not all of us are about to face the worst feeling of all, which is that of getting wiped out. Michael’s tandem jumper was fine. His chute opened properly, he ended up landing right next to Michael, and he called the emergency services and saved him.

Some of us will experience a soft landing while others will have to suffer from injuries.

The landing is here.

What’s amazing is that Michael never had doubts about returning to his occupation as an instructor.