Are you Not Entertained?

We bought a new TV set a week ago from Samsung, with all of the bells and whistles.

I haven’t had a TV in my house since 2005, but since we now have little kids, it’s difficult to go out as much as we used to and with the incredible amount of quality documentaries and unbelievable footage, the level of mental and intellectual stimuli the world of entertainment can provide, we’re happy to absorb good-quality content.

Yesterday, as my family came over, they wanted to watch a show called “Breaking Point,” where host Bear Grylls, a famous British adventurer, with a military background, takes everyday people, who have a fear or a phobia and by stretching the limits of what they thought they were capable of, he hopes to ignite something within them, so they get over the hurdle, past the breaking point.

For one, it doesn’t always work for him and, of course, in a TV set environment, there’s obviously lots of editing and cherry-picking of film going on, but his strategy is to have the guests go face-to-face with their deepest and darkest fears.

He leverages his intimate knowledge of their past and history to incentivize them, by connecting the getting-over a fear to the gift that this freedom would provide the guest’s children or parents or both.

One person that came on wasn’t willing to eat anything, except for a peanut butter sandwiches and cheese sandwiches, aged 35. He stopped eating anything else 28 years ago and that’s how he’s been living his life.

Is it a death sentence? No, but it is certainly a huge burden on him and on his family.

He wanted to solve this fear of eating anything else, so that he could be normal.

In order to do that, Bear Grylls cooked a heart hamburger for him, from the corpse of a dead guzzle.

The guest couldn’t do it; Bear had tested this person’s breaking point, but the guest promised Bear that because of the experiences he had undergone with him for the three-day shoot, when he gores back home, he’ll start eating normal food.

Bear looked at him and said: “You don’t need to eat the heart burger, if you overcame your fear of regular food.”

The FED, similar to Bear Grylls, is not deliberately and purposefully looking to break your back and crash the economy, but it does want you to reach your breaking point, where society, as a collective, would cease spending so freely and think that the FED and the government will fix any and all pain.

If your neighbor would stop living above his means and if your friend would stop dumping money into things he doesn’t need, the problem would be fixed today and we wouldn’t need more rate hikes, but so long as your neighbor is sending resumes to 10 companies at a time and treat his next job like an all-you-can-eat buffet of his choice and so long as your college roommate is taking a year to search for himself in the East, instead of saving every dime he can, the wealth effect in our society is still artificial, originating from years of zero interest rates and loose credit.

The FED, like Bear Grylls, wants to see drastic change and then the job is done.

This is already the worst year I’ve seen for the market in decades and the market is FINALLY pricing a recession, which means that we’re getting to the point, where the FED can say that it believes it managed to get its point across: 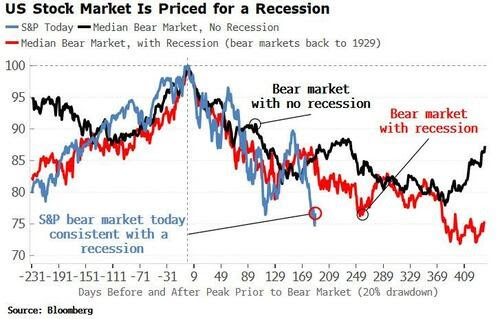 It’s safe to say that if we’re not at a bottom, we are certainly forming one in the weeks ahead, as more tax-loss harvesting will go on.

Like the guests on the show, who thank Grylls for helping them, some are thanking the FED for the tough love.

So, whether you’re thankful or hateful, the fact remains that there are finally great opportunities in the equities market.