MARKETS WILL BE ROCKED: Record Deficit and Yield Curve Inversion to Create Havoc… and Opportunities

If there were ever a time to radically change your investing strategy, this is it. The reality of a record U.S. deficit, coupled with an ominous inversion of the yield curve, has set a ripple effect in place that will rattle the markets and bring history’s longest bull market to a screeching halt.

According to the U.S. Treasury’s own calculations, government spending increased by 8% in February alone, bringing the Federal Government’s budget deficit to a record $234 billion, the largest monthly shortfall on record.

It’s unbelievable but true: somehow, the Federal Government managed to spend $401 billion in February while taking in just $167 billion. The previous monthly deficit record of $231.7 billion was way back in February of 2012. In 2018, the deficit was “only” $215 billion. Now, with February’s massive addition, the budget deficit has seen a 39% increase for the fiscal year compared to the same period a year ago. 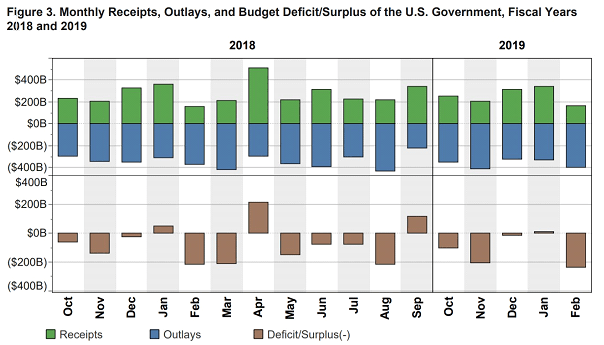 How much longer can the Federal Reserve sustain the global Ponzi scheme through incessant fiat money printing? In a decade-old bull market, the last thing you want to do is jump in at the top, where the risk-to-reward ratio is highly unfavorable. If you need further proof that the whole house of cards is ready to collapse, check the spread between the 3-month and 10-year U.S. Treasury yields:

When this spread goes negative, you can count on a recession happening within 18 months, as this has happened consistently: the stock market crashes of 1990, 2000, and 2008 were all preceded by a yield curve inversion.

If you’re heavily investing in blue-chip stock market indices, you’re exposed to massive risk and buying assets at a high price, which is definitely not a formula for building wealth. The best place to position yourself in times like this, with debts and deficits mounting and the yield curve flashing a recession signal, is the gold and mining sector.

This is a sector that relies not on debt-fueled promises, but on gold, which has been a store of value and a tangible form of money for over 6,000 years. The investment I’ve been recommending as a safe haven for the coming economic storm is Sandspring Resources Ltd. (TSX.V: SSP, OTC: GLDXF), which has a 100%-owned 10-million-ounce-and-growing gold asset known as Toroparu, located in the mineral-rich and mining-friendly Guiana Shield region. 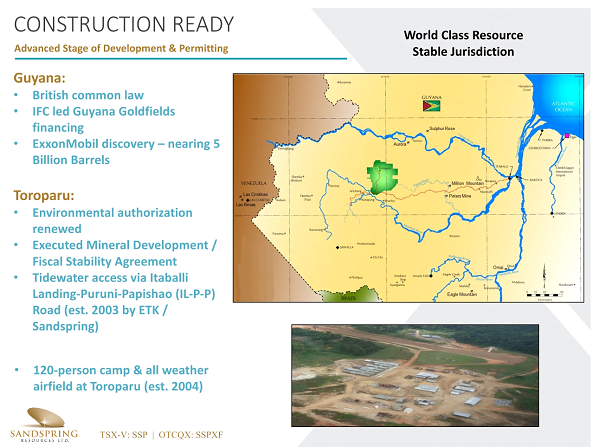 Sandspring also has full ownership of the Chicharrón gold project within the Segovia Mining District of Colombia. With recent high-grade gold production and strong exploration potential from their shallow drill program, Chicharrón provides the fastest path to production and near-term operating cash flow.

Indeed, the production of Chicharrón is happening on schedule, with Sandspring announcing the delineation of three new mineralized vein structures in this asset. Excellent core recovery was obtained from the first phase of drilling at Chicharrón, and a third new mineralized structure has already been identified in several drill holes in the southwestern fault block.

Sandspring Resources CEO and Director Rich Munson noted the value that these results will bring to the project, company, and its shareholders: “The drilling results support the potential that additional mineralized shoots similar to the Guía Antigua exist along the Chicharrón Shear. The discovery of these additional mineralized structures near the historically productive Guía Antigua mine certainly warrants further exploration work.”

We view SSP/GLDXF shares as a terrific value in a market where it’s tough to find value. With so much economic turmoil ahead of us, it’s time to start accumulating gold assets like Sandspring Resources for de-risked portfolio protection and superior returns even in the stormiest of market conditions.

Never base any decision off of our advertorials. Future Money Trends stock profiles are intended to be stock ideas, NOT recommendations. The ideas we present are high risk and you can lose your entire investment, we are not stock pickers, market timers, investment advisers, and you should not base any investment decision off our website, emails, videos, or anything we publish.  Please do your own research before investing. It is crucial that you at least look at current SEC filings and read the latest press releases. Information contained in this profile was extracted from current documents filed with the SEC, the company web site and other publicly available sources deemed reliable. Never base any investment decision from information contained in our website or emails or any or our publications. Our report is not intended to be, nor should it be construed as an offer to buy or sell, or a solicitation of an offer to buy or sell securities, or as a recommendation to purchase anything. This publication may provide the addresses or contain hyperlinks to websites; we disclaim any responsibility for the content of any such other websites. We have been compensated by Gold X three hundred thousand dollars for online marketing. We also own shares of Gold X purchased on the open market and their recent private placement. In the future, we may be buying or selling shares without notice. Assume we could be selling shares if you’re seeing this thirty days since its publishing date. Please use our site as a place to get ideas. Enjoy our videos and news analysis, but never make an investment decision off of anything we say. Please review our entire disclaimer at FutureMoneyTrends.com