COVID-19 is a MID-BLOWING, government-sponsored ECONOMIC EXPERIMENT in many ways. Without a pandemic, no country would ever ELECT to VOLUNTARILY shut down its economy in order to learn from that kind of event and see what it does to society.

Why would a functioning country the size of the United States, which produces over $21 trillion in GDP, sentence itself to FINANCIAL SUICIDE like that, RIGHT?

In 2020, though, governments made decisions that are BIGGER AND GREATER than just pure mathematics. It could be and very well MIGHT BE true that the cure, so to speak, which means the price of social distancing and closing down large segments of the economy, is greater than the disease IN MANY PEOPLE’S MINDS.

The disease revolves around human lives, which are IMPOSSIBLE to assign a value to. In some countries, the life of a person isn’t VALUED as much, but in most modern nations, it is INCONCEIVABLE to allow 10%-20% of the general population (60-year-olds and up) to risk dying from a virus that could be PREVENTED by taking drastic yet DOABLE MEASURES.

One of the world’s HIGHEST-PAID advice-givers, an institution that sells financial commentary only to sometimes BET AGAINST its own clients, Goldman Sachs, which is one of Wall Street’s LEAST-FAVORITE companies, is now pounding the table on the fact that FAAMG stocks (Facebook, Amazon, Apple, Microsoft, and Google) have become TOO VALUABLE compared with the other 495 components of the S&P 500.

Microsoft is the most valuable enterprise the world has ever known, worth $1.32T, followed by Apple’s $1.32T market cap and Amazon’s $1.14T price tag, while both Google ($900B) and Facebook ($576B) are the sub-trillion members of this group.

The collective price of the ENTIRE INDEX is $28.1T. 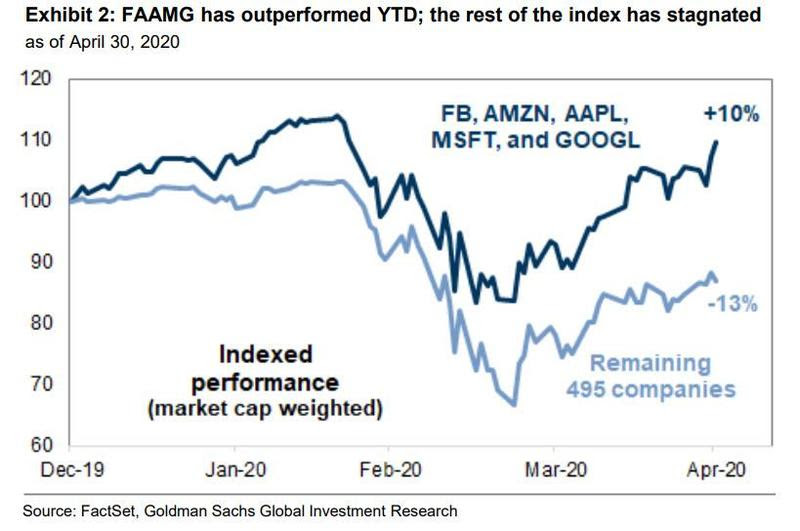 What Goldman Sachs is arguing is that the market is TOO CONCENTRATED, showing the return of these 5 stocks versus the rest of the index.

The big eat the small in crisis times, and that’s what markets might be pricing in.

What my research IS SHOWING is that Goldman Sachs’ calls have been mostly WRONG during the entirety of the COVID-19 PANDEMIC.

For one, the BEST-PERFORMING stock of the S&P 500 in 2020 is actually NEWMONT MINING, the largest gold miner in the world. Its stock is up 40%, year-to-date.

If the market crashes, it will have nothing to do with its CONCENTRATION because these 5 behemoths aren’t trading for BUBBLE VALUES. 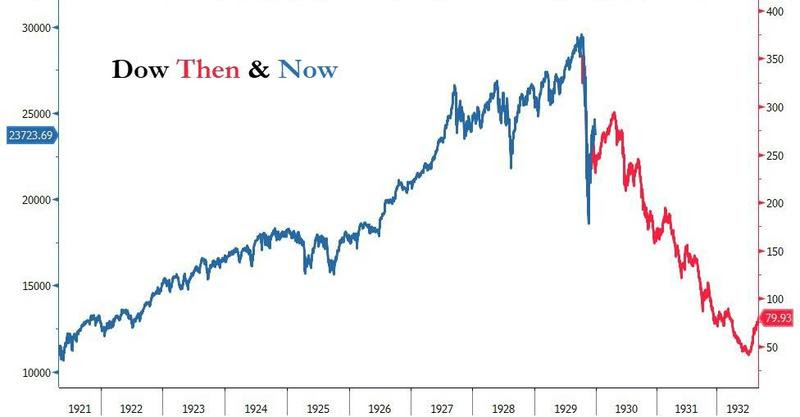 Other camps of bears include the CHART PLOTTERS, which make the overlay of how the Dow Jones traded in the Great Depression versus how it is PRESENTLY MOVING.

Don’t make those assumptions, either.

In 1929, the Federal Reserve reacted MUCH DIFFERENTLY than it did this time. On top of that, 4,000 local banks WENT UNDER. Investors were up to their eyeballs in margin calls since they were leveraged.

The Great Depression ISN’T AN ADEQUATE comparison either, then.

In 2020, we took a bullet train (U.S. economy) and we DIDN’T derail it (2008), simply forcing it to STAND STILL (knowingly shutting it down). That’s unprecedented and DISRUPTIVE, creating plenty of unknowns (habits are changing), but if you’re going to form a short-term (1- to 3-year) BEARISH WORLD VIEW, do it on the premise of the likelihood that COVID-19 will force economies to CLOSE AGAIN (what happened in Japan, for example).

Reopening is PRICED IN but RE-CLOSING is not.

That is my BIGGEST CONCERN.