I Can’t Give You a Better Gold Investment Idea

One of the luckiest days of my life was September 8th, 2012.

It was the day I discovered how to safely speculate.

You see, up until that day, I obsessed over how to trade stocks. I had all the charts, technical analyses, and public filings… All of these are important when researching a stock, but what I would go on to discover was that 80% of a stock’s performance doesn’t come from any of those indicators I was following.

That day, I met two very significant people who came into my life: Doug Casey and Marin Katusa.

I was in Carlsbad, California at the Casey Summit.

Doug, who is a legendary speculator, shared one of the most important lessons I’ve ever learned for investing in micro-cap companies. It sounds simple, but what he told me was to always bet on the jockey.

His protégé, Marin Katusa, a top fund manager and New York Times best-selling author on investing, lived by this code as well and made a bloody fortune! He continues to do well, so if you’re not familiar with his work, I suggest you take the time to subscribe to his free letter now.

Both Marin and Doug, along with their fellow legend, Rick Rule, had made a lot of money by investing in Robert Friedland, Ross Beaty, Rob Portermain, and Lucas Lundin.

This is why Doug Casey set Marin out on a mission over 10 years ago: “Find the next Robert Friedland.” If you don’t know who Friedland is, he’s a BIG, BIG deal in the natural resource space.

He’s had the biggest wins: he’s the billionaire behind the movie Crazy Rich Asians and he says he’s partly responsible for naming Apple Inc.(NASDAQ: AAPL) because his college roommate, Steve Jobs, was brainstorming names with him.

Robert Friedland was in charge of an apple farm that Steve Jobs actually worked at, and that’s when, according to the official story, Jobs was inspired to call his new computer company Apple.

Today, Robert is just as energized as he was when he was young, but the fact is that he’s not young at all – he’s 69 years old. This is why Doug Casey set Marin on a mission to find the next Friedland.

Marin told me that he wanted to find the people he could invest in for decades, and that’s exactly what he did.

The man he gave his highest endorsement to when talking to Doug Casey and Rick Rule was a young mining entrepreneur named Amir Adnani.

Now, nearly two decades in the business and in his 40s, Amir has proven himself to potentially be even greater than Marin or Doug had thought.

Rick Rule told me once that “Amir has become a force of nature.”

***I’ve seen him outperform his peers over and over again since meeting him.***

In fact, he truly showed me what Doug meant by investing in the jockey.

In 2011, I invested in a gold producer, Scorpio, which then proceeded to go from $1 to 10 cents! Meanwhile, Amir, who had just done an IPO on Brazil Resources with ZERO gold, saw shares rise from 65 cents to $1.30!

During the worst bear market in 40 years when other gold CEOs were trying to raise money to keep the lights on, Amir raised cash and went on a gold project shopping spree, gobbling up high-quality projects with gold resources and paying pennies on the dollar where prior owners had invested tens of millions!

Amir took it to the next level: not only did he not go out of business, but he purchased assets cheaply and took the company into production!

As for GoldMining, they have nearly CAD$9 million in cash, no debt, and get this: he hasn’t raised money in 3 and a half years!

Seriously, think about other gold juniors and how many pathetic financings they have done for $500,000 to try and limp their way to where we find ourselves today, at the start of what I believe will be a ferocious bull market for precious metals.

In my opinion, you’re not going to find a better-tested CEO under 50 that has this kind of experience. He’s:

1. A uranium CEO who not only survived Fukushima, but advanced the company.

2. A gold chairman who has taken the worst bear market of 4 decades and turned it into an opportunity to grow a massive gold hoard.

Amir acquired in-ground gold resources for as little as fifty cents per ounce!

MY GOD, the man has built something spectacular, and investors can still buy it for a fraction of the cost compared to what these gold assets have had invested in them by previous owners. 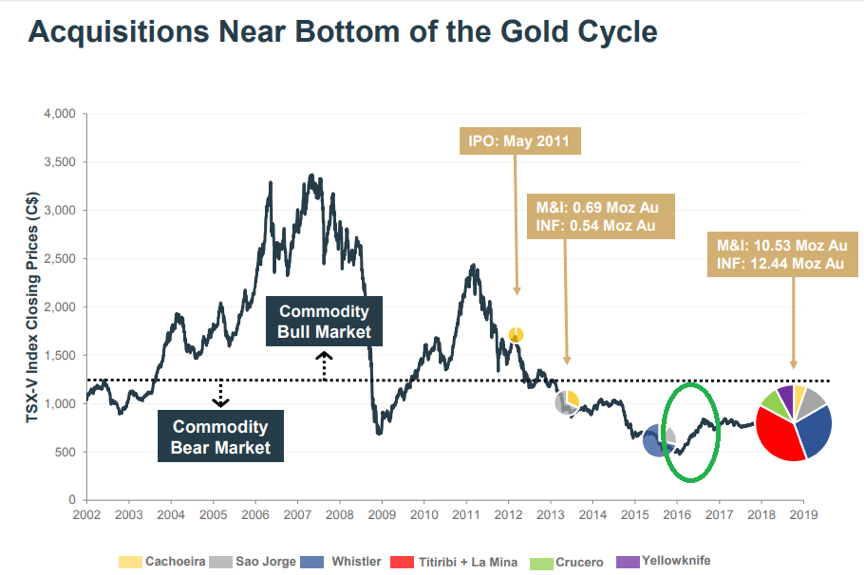 Amir is the one to back, in my opinion. We can partner with him for decades on not just GoldMining, but whatever he has next in the future.

Right now his focus is GOLD, and it’s where I’m putting my own money as well.

I strongly encourage readers to watch Amir’s most recent presentation at the Cambridge House Investors Summit.

One of the largest shareholders of GoldMining is the KCR Fund, and the fund’s name originates from its founders: Marin Katusa, Doug Casey, and Rick Rule.

Editor’s Note: A special thanks goes out to Marin Katusa for always trying to steer me right. One of my best nights was at an IHOP at 3 am in New Orleans when Marin shared some insights with me that have protected my money and helped me grow my wealth rapidly.

His best recommendation to me was simple: go long Amir Adnani.