NO EXIT PLAN: Powell Sends Markets to NO MAN’S LAND!

Can You Survive the
Biggest Chokehold in 90 Years?

It’s hard to truly grasp how bad things are until you really take a wide view, zoom out, and understand that the dollar has sharply moved higher since mid-2021 and it always ends with a U-turn.

Take a look at previous times when the dollar rallied this aggressively: 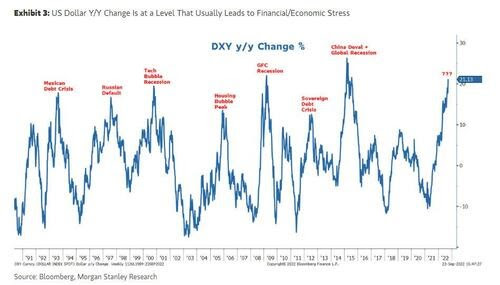 Yesterday, as I brought my mother-in-law home and started on my way back to my place, I saw that I had more than 40 minutes to go and called my fund manager. He was getting coffee, so it was perfect to chat with him for a bit.

I was surprised by how easily he took the reset of 2022. In essence, he told me to look at how far back the indices have pulled. He said that they’re still higher than in February 2020 and that this isn’t considered to be a real plight, so things aren’t all that bad.

I disagreed and asked him if he realizes that NOTHING is working in 2022 because stocks falter in normal corrections when there’s a rush to bonds so the 60/40 portfolio is hedged, and if both are struggling then money flows to real estate, but that’s cracking.

The FED has identified that people are spending in a way that is not in line with the pace at which the economy is growing. Restaurants were reporting shortages in oysters, for example, London’s Heathrow Airport capped its passenger capacity, and Americans were willing to pay more for a used car than a new one.

The root of the problem may be with the government and the Federal Reserve for firing cannons of cheap money at the public, but it is also the fault of the general population for taking the bait.

The FED is now choking the lifeblood out of equities, bonds, real estate, and consumerism and making you pay if you overdid it on spending and investments.

If cash was burning a hole in your pocket so you went out, spent it, or invested it, the exact behavior the FED wanted to induce you to do in 2009 when it was smart to do so because stocks were cheap and real estate was on sale, they’ll crush you now.

The FED cannot stop because it doesn’t feel like most people are really getting it, so you’ll keep seeing charts like these! 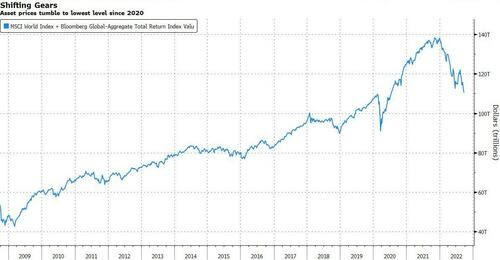 Jerome Powell literally said on national TV that he thinks you shouldn’t buy a house.

Mortgage rates are climbing at the fastest pace in history, and the 30-year rate is now at a 22-year high of over 7.00%!

The FED is telling you in every way possible that UNTIL they can truly influence the behavior of the public to stop thinking prices only go up, they will hold you hostage to rate hikes.

This strategy didn’t work in 2009 and it won’t work now, but it will only end with the system reaching a breaking point.

Let’s say you’re a teacher trying to show your swimming students that if they don’t use the right technique, they’ll get tired, so you instruct them to swim in the wrong way to teach them a lesson they’ll never forget.

If they refuse to change and you continue to deliberately harm them, the teacher eventually either faces a lawsuit or a stampede of dissatisfied parents, even though the teacher meant well.

As you can see, the FED is really looking to force your hand into submission, with monthly payments now reaching a crazy 44.5% of a household’s disposable income, but if people keep buying despite these adverse policies, the FED can’t really do anything about it (this chart is a few months old, and it’s actually around 50% today!!). 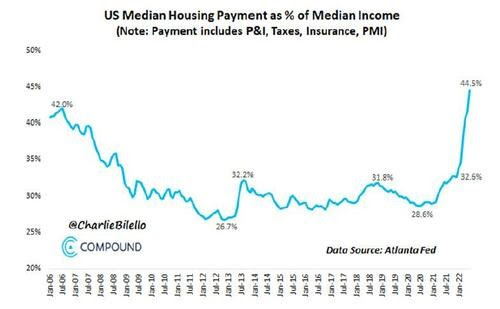 If you want to fight the FED, you can.

In my opinion, be easy with investments. When the FED folds because it can’t stop the buying power of the American public, who is in the mood for spending and investing, get back in the game.

The FED is not your friend.