The FED is 100% Raising Interest Rates

It’s a done deal… the FED is 100% certain that in less than two weeks from today, they’ll be jacking up the FED Funds Rate for the first time since 2018!

Personally, I think this is long overdue. The FED could have hiked for the first time in the fall of 2021 after the Delta variant subsided and they realized that inflation has morphed into a much more structural and societal issue.

Once the CPI numbers started to come in above 6%, they should have made an emergency rate hike. Instead, here we are, a full five months after the entire world has woken up to the realization that inflation is way too high, and we’re only now beginning to handle it.

This massive U-turn in sentiment towards inflation has created a sentiment of bearishness, panic, and fear on Wall Street, where big money is selling and cashing out at the same time as retail investors are either tapped-out (if they’re buying the dips) or too scared to catch a falling knife.

This is basically bear market mentality because we are in a bear market. We think that the highs for the NASDAQ 100 and the S&P 500 won’t be broken in the next few months, but rather in 2023.

What we are seeing is that the markets are anticipating that 2022 and 2023 will be about regaining normal footing, but once inflation comes under control, we’ll go back to ZIRP (Zero Interest Rate Policy).

The markets are already forecasting cuts in 2024: 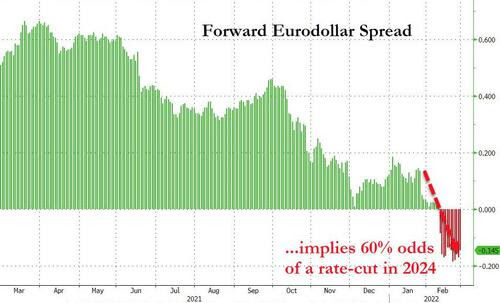 I also want to address the subject of COVID-19. Anything and Everything that could have been said about it has been said…

In Biden’s SOTU address to the nation, he clearly said that America is opening up and going back to work.

Look at the cases and deaths, which are now manageable by Western healthcare facilities!

The world is moving to a better place with so many readily-available solutions to this virus, and I couldn’t be happier! 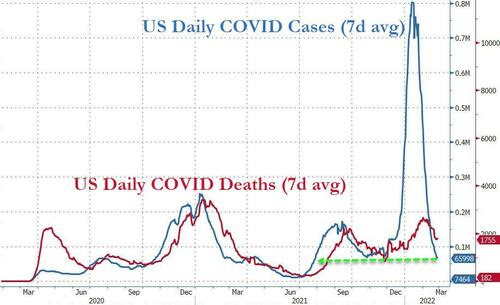 I also want to talk about war for a second. My best friend served in the military, and his father did as well, both defending their country from hostile neighbors.

War is failure; there is no justification for it, and it is the neon sign that communication and trust have broken down.

No great leader wages war unless it is a means of survival and defense. No one has the right to decide the fate of others they have never met and judge them to death.

Leaders who choose military action may be able, strategic geniuses, but they are always little human beings.