It’s a warzone out there; there’s no other way to describe it. Everything I’m seeing tells me that there’s a great disconnect between how investors see the world and how policymakers view it.

I’m not shocked by this total lack of communication between the free markets and the overlords, but I’m troubled by the fact that the problems aren’t creating retail panic yet.

We’ve got little logical explanation as to why the public keeps buying the dip with such conviction. In the grand scheme of things, they’re absolutely doing the right thing as long as they’re buying the right businesses, but this is NOT capitulation behavior, and that makes me worry that there could be much more in the way of aggressive policies unless the panic-selling engulfs the average trader, which hasn’t happened.

As you can see, the yield of the 2-year bond is much higher than the dividend yield of the S&P 500, which means that there’s a liquidity squeeze. This one is big! 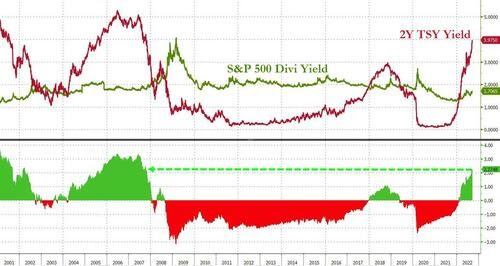 What’s interesting about this whole situation is that because, for the most part, whoever wants to be employed these days can easily find a workplace that will welcome them and because people that purchased homes before 2022 (the overwhelming majority) are still well in the green, this reset is mostly hitting institutional money, not the Main Street crowd.

What I’m about to share with you from here on is highly controversial and likely to be debated and disputed, and you might even shake your head in disbelief, but from the mountains of data that I’ve analyzed, it is my purified overview of where we are.

Read it and think it over for yourself:

We can debate from here to eternity whether or not Putin is bluffing, but the West isn’t interested in finding out.

Putin has lost, and the entire world knows it, but no one can admit it because it will lengthen the war and aggravate him more.

Instead, in the three months we have left between now and the end of the year and the two months left before the European winter turns cold, the West must come up with a way to grant Putin an offering that would be considered a victory so he can walk away from this disaster with the ability to show his country that he’s a victor.

Putin is about to receive his bailout package; someone in the West is already working on a way for him to save face, but believe me, that’s all it is.