Next year, it will be 60 years since the revolutionary book by Joseph Murphy, The Power of Your Subconscious Mind, came out and educated its 10 million readers on the notion that inspiration and genius come from the part of our mind that knows no limitation and dares to imagine without blocking vision with obstacles.

When I read it in 2007, I found the story about the self-fulfilling prophesy to be the most interesting of them all.

In one of the European countries, a person was diagnosed with terminal cancer and was given 30 days, at best, to live.

That person died on the 27th day.

The diagnosis was wrong, and it was found that the person never had cancer, but because he was so influenced by the doctor and his subconscious was given the instruction to act as though the body was terminally ill with cancer, he perished on the 27th day.

Self-fulfilling prophecies are abundant in our lives because humans act upon their beliefs.

One collective belief taking hold in our modern society is that governments and central banks have led us astray and that a miserable recession is unavoidable at this stage, caused by exponentially rising prices.

Take a look at the chart below that proves the public is convinced prices can only go up from here: 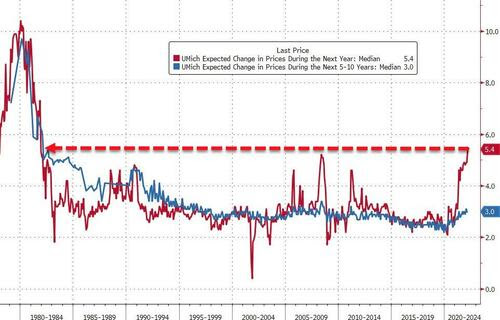 The word “inflation” has been spoken so many times in the past 18 months that Wall Street and Main Street are both obsessing over it.

Wall Street is concerned over corporate profits and how well management teams will be able to navigate the environment of rising costs and shortages in key materials.

Wall Street is deeply worried about the interest rates that are most suitable for today’s world, with the 10-year bond yields reaching 2.50% on Friday!

If people behave as if inflation will continue to rage, they’ll act on that logic and spend more on the things they feel will be more expensive in the future.

The FED is on a mission not just to materially contain inflation but also to convince Wall Street and the general public that it is successfully doing it.

Wall Street already believes the FED is going to raise rates aggressively, but the debate going on relates to how many times it will do so.

Right now, the market is pricing in the likelihood of 9 rate hikes! 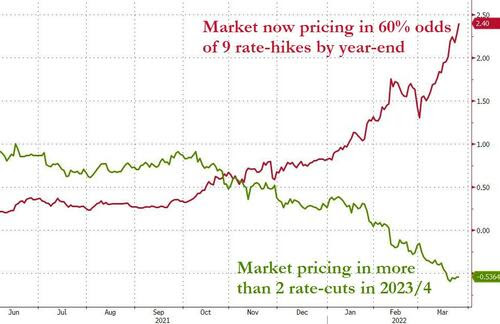 There’s a tradeoff between the pain that must be felt in order to stop the spiraling inflationary pressures of wages, commodities, and housing and the risk that while doing this, the global economy would slow or fall into recession.

My personal assessment of the current situation is that the economy is strong and it would require a totally failed FED policy and political stalemate to get this one wrong.

That could happen, but it is certainly not the higher probability at this point.

If any Senator or Congressman is reading this, listen to business leaders and help get confidence up by doing what’s right for the economy, not what’s beneficial for your personal aspirations, as narrow as they may be.