In two of the most disastrous financial catastrophes the modern world has ever faced, in 2008 and 2020, gold sold off hard.

With the military operation that Russia embarked upon in Ukraine with the goal of overthrowing their government and putting a Russian ally at the helm of the government, the stock market faltered and suffered its worst January and February since 1928, and there was nothing one could do about it, but gold actually rallied and didn’t see a liquidation exodus.

Falling in love with an idea or holding a grudge or a feeling of vengeance towards another and letting go of it will lead one up many blind alleys until they realize the fallacy of their ways.

On December 5th, 1989, in the city of Dresden, then in East Germany, a satellite state of the Soviet Union and its shield from the West, protestors stormed the building of The Stasi and then set their sight on the offices of the KGB station in town.

The protestors wanted to express their disgust with communism, and the Soviets used the furnace to burn the documents and the names of their agents and confidants.

They had to get rid of so much data that the furnace stopped working. To meet with the locals outside and deter them from rushing into the building, a translator greeted them.

He explained that Moscow had given the workers in the building the green light to open fire against any and all rioters and that they were heavily armed.

This saved the KGB’s secrets housed in that office and bought them time. The translator was lying… though he spoke fluent German, he was a top KGB spy, and before he decided to come out with his plot, he called the Red Army for reinforcement, but the soldiers told him that without the order coming straight from Moscow, they were not doing anything.

He asked what Moscow was saying, and the men replied that “Moscow is silent.”

This bluffing agent turned translator is Vladimir Putin, and he will never forget the weakness of a silent Moscow that crumbled just two years later in 1991.

In his book, he would call the fall and demise of the Soviet Union the “greatest geopolitical catastrophe of the century” and would caution that, if not corrected soon, they’d find themselves as a 2nd-echelon or 3rd-echelon nation.

Putin is a KGB agent at heart, and his desire to erect the Soviet empire has led him to start a war with Ukraine and risk his entire legacy and reputation on the success of this war, but it’s not working.

His obsession with the revival of the Soviet empire has led to panic in the markets and inflation in commodities.

He sparked the 8th BUY signal for the already conservative BULL/BEAR barometer of Bank of America: 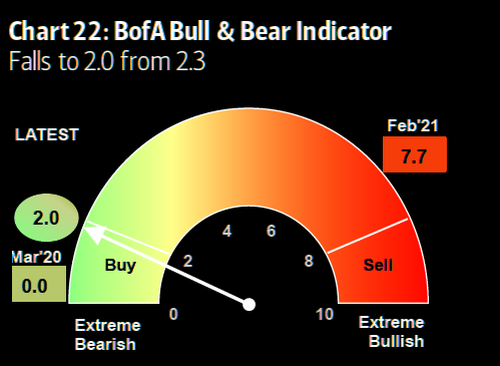