SILVER BLASTS THROUGH $20 Like a Knife Through Butter as Short-Covering Frenzy Commences!

The numbers don’t lie, folks. Silver’s setup made it crystal clear that $20+ silver was imminent and it was just a matter of time. I’ve been pounding the table and will keep pounding it until the table collapses. Silver’s bull run is officially in effect and the short sellers are in freak-out mode.

Looking at the price action in silver, the angle and the momentum tell you everything you need to know about who’s in control now – and it’s definitely not the short sellers:

Impatient traders were teased and taunted for weeks on end as the silver price flirted with $19.50 and then $20. More experienced investors knew all along that this was the market’s way of basing for a major breakthrough. $20 is a key level, not just psychologically but as a long-standing technical resistance level that needed to be broken.

Not just broken, but demolished – just look at the volume spike, shown at the bottom of the chart. There’s conviction and heavy participation in this move. The commodities market isn’t just buying here; it’s making a statement.

Just a couple of weeks ago, I issued a warning that a massive short squeeze was coming, not just in the silver bullion price but in First Majestic Silver stock (TSX:FR, NYSE:AG). This is a premier miner with a serious commitment to silver, and as you can see, the short interest has built up to the breaking point: 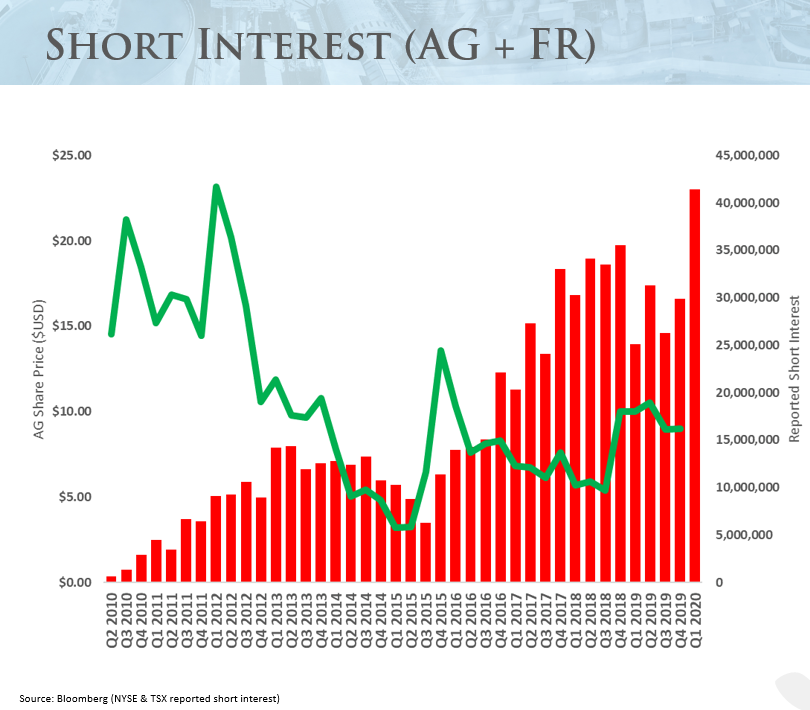 These excessive short positions are untenable and the “big unwind” will be tremendous – and deeply uncomfortable for anyone who bet against silver in general and First Majestic in particular.

Meanwhile, silver bulls are having their day in the sun as the spot price touches its highest point in four years. It’s never been a better time to consider precious metals and mining stocks as part of your portfolio as tensions, both internationally and locally, continue to mount.

The litany of complex economic and political issues is extensive and just keeps on growing. Just to give you a few of the highlights:

Amid these threats, businesses and individuals aren’t just asking for more stimulus money from the government – they’re demanding it now. It’s time to brace for more money printing and big-time spending, which of course is bullish for precious metals.

There’s no question that $20 is just the starting line for silver and the mining shares have much more room to run. The next target for the silver per-ounce price is $22 followed by $25, and then it’s off to the races as the short sellers run for the hills and the silver stackers and shareholders catch the biggest windfall in years.