SILVER ON VERGE of UTTER CRUMBLING!

This Could be the End

When you flick the switch in Los Angeles to light up your living room, a turbine in Washington starts spinning. With electricity generation, the demand is literally supplied as it is created. There are virtually no reserves!

Electricity is mostly influenced by climate on a month-to-month basis. When it’s cold, electricity is needed for heating. In the summers, A/C units run nonstop.

Between the most in-demand month and the most tempered month, the difference is a third, so the seasonality of electricity generation doesn’t challenge the grid, but within the day, the peaks are really noticeable.

As households awake in the morning, lights, thermostats, and appliances are switched on. In the afternoon, when children are back from school and afternoon activities and parents are back from work, the surge in demand accelerates again.

Because energy storage is almost nonexistent (water sources, for example, do carry reserves), there is ZERO SLACK.

When you turn on your laptop, that electricity was generated just moments prior and possibly hundreds of miles away.

To ensure a constant supply, power stations operate multiple layers, nuclear and coal, which run continuously and never rest. Unless the nuclear and coal layers are in maintenance, they’re generating electricity and are in charge of the “baseload.”

On top of these, when more electricity is required, natural gas can be used in a matter of 15 minutes, so it provides an extra layer.

Just like electric grids, which work on supply and demand, along with peak volumes and thin ones, the market goes through these cycles of demand for certain groups of companies.

Right now, December 2021, is considered one of the lowest-volume eras of late.

Hedge funds have been selling their LONG positions, shorting and covering, and doing all of this with very low trading volume.

Hedge funds are largely out of the markets. 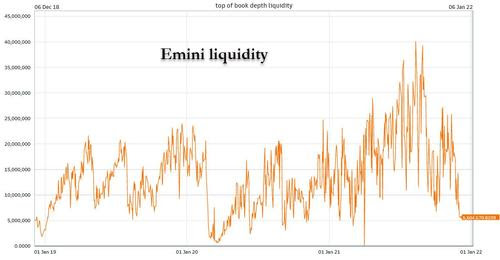 As I said throughout this period, I was buying heavily. This past Monday and Tuesday, my portfolio was up more in one day than at any other time in my career.

As it turns out, this coincided with the largest 10-day net selling of U.S. equities since April 2020 and plenty of short-covering.

Bubbles don’t occur when hedge fund money sells at the most ferocious pace since a worldwide pandemic was first mass-broadcasted, bringing a wave of panic like we’ve never seen since 2008.

Why are hedge funds reducing exposure by this much?

The reason is fear of tightening.

If you agree with our stance that central banks will not be able to taper by much, you understand that as the markets have already adjusted for a very hawkish Jerome Powell, it will be very surprised by a return to dovishness.

If that happens, silver can literally hit $30/oz in mere weeks. It has been able to hold above the $22.50/oz support in the face of bad news.

On December 15th, the markets will finally be able to form an opinion on tapering, and silver could catapult.