SQUASHED Like a BUG: CHINA IS BLUFFING ABOUT WW3!

They’re No Match for the West

Who doesn’t like to see parades of military might? Surely every patriotic citizen of the Soviet Union felt like their leaders were the greatest when endless fleets of missiles and trucks made their way through the center of Moscow in an attempt to put a spell on the average person making them believe the U.S.S.R. was the global empire.

China and North Korea do the same today, showing off their military capabilities with fancy exercises and scare tactics designed to influence the minds of the public.

When you sit down and analyze the likelihood of the Chinese invasion of Taiwan or expansion of its South China Sea goals, you quickly realize that the flexing of muscles isn’t equivalent to the real potential of gaining a military advantage in the region.

China isn’t too sophisticated, and while no one underestimates its ability to continue improving on its ultimate goal of uniting with Taiwan under CCP leadership, its odds of success are currently slim.

First of all, as long as Taiwan remains the global monopoly in advanced chips and electric components, the U.S. will NEVER close its eye on it.

This isn’t some strategic island; it is the essence of all modern warfare, without which China is basically going to turn into the only superpower in the world.

Whoever controls Taiwan controls the world, so if China tries anything, both Japan and Europe will immediately ally with the U.S. to defeat them.

I have said before that WW3 is unlikely to start until China’s advantage becomes much more apparent because the risk/reward is just not in its favor today, nor is the element of surprise.

Its economy will be squashed like a bug in a matter of weeks if it launches an attack on Taiwan, which is essentially an attack on the U.S. Navy in the South China Sea, because it will run out of resources (primarily energy) in weeks.

China’s 1.4 billion people will go hungry, and that’s not an exaggeration.

Now that we’ve established that WW3 is not the likely path, let’s talk about what the most realistic scenario is: more severing of the codependence that’s existed for the past 40 years between the Americans and Chinese when it comes to trade and globalization.

American companies are diversifying out of China and into Mexico, Canada, and even domestically in the United States. The localization of supply chains is probably the single greatest opportunity for careers in the next decade apart from infrastructure and energy. 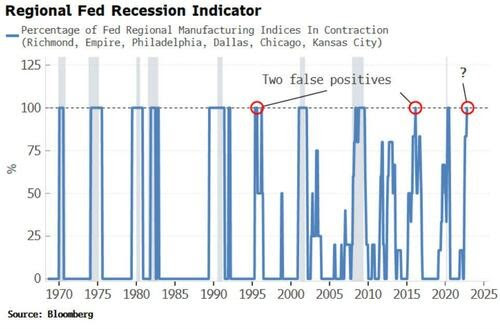 We don’t believe the decoupling of blocs between China and the United States is necessarily a huge travesty. The world is large enough for both to coexist and add to the competition. In our view, the end of this codependence is also likely to usher in a new form of reserve currency regime, which is why we are EXTREMELY BULLISH on gold.

As the FED continues to flirt with a severe recession in 2023, brace for impact.