We’re Looking Into the Abyss

From a technical analysis perspective, we’re really on the precipice of our darkest hour.

Speaking with my fund manager just hours ago, he literally told me that if the market opens down by 2% tomorrow, he may just sell equities across the board and reduce exposure to one of the lowest levels in the fund’s history.

Wall Street is laying low because the markets have taken out the lows, the Dow Jones is in a bull market, and the way down has opened up like the doors of an Apple store on Black Friday.

We’re very close to capitulation, but we need one final nail in the coffin of the school of thought that argues the FED will break and give the market the sugar it yearns for.

I personally see no such thing.

They’ve spent an entire year spewing bullshit about supply chains being the only cause of inflation without understanding that the public is feeling like nothing can stop the gravy train that is the global economy, so they’re chasing the inflation runaway they’ve allowed to happen and punishing us with a very aggressive tightening cycle that’s truly and epically stupid.

You can see that the outflows of gold are the worst in eight years, which was the last time markets became convinced that deflation was coming! 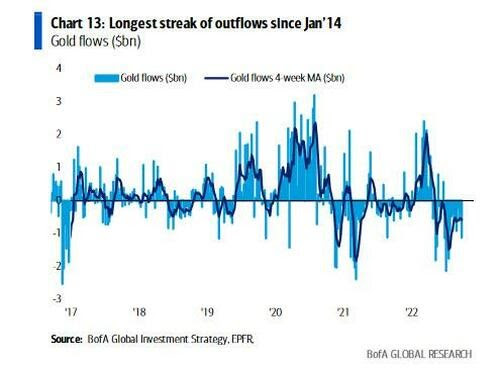 If I was to sum up how the FED royally screwed us, it would go something like this:

None of these were hawkish enough since we are now at 12 rate hikes of 25bps with MORE COMING! 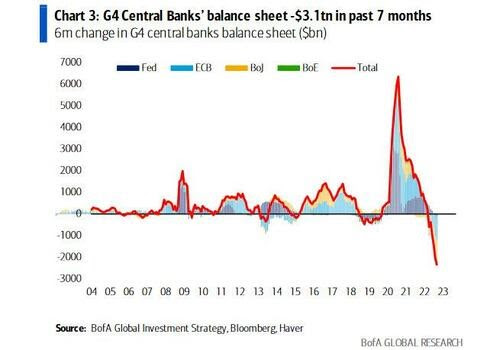 We’ve never seen such a cold cut of credit in the past 18 years, and if the data went further back, I think it’s safe to say we haven’t seen such aggressiveness since Paul Volcker.

Putin has also ended an era of peace in Europe that lasted for nearly 80 years. War is inflationary and disruptive.

The only silver lining is that we haven’t seen layoffs yet! If and when this happens, it will really turn into a depression.