Hanging by a Thread

In high school, one of my good friends, not a very cute guy, to say the least, was constantly dating the most beautiful girls in school. Many of the guys were puzzled, asking things like “are the girls not looking at the same person we are?”

Good looks are important, but even in high school, a period where outside appearance is so critical for self-esteem, personal magnetism and charm play an even bigger role.

One of my friends became very discouraged by this. He had thoughts like this: “I have so much more to offer than him… I go to the gym daily and look so much better, but the girls flock to him.”

This reminds me of the famous episode of “Friends” when Ross is undecided on which girl he likes the most and does a pro/con chart with Rachel in mind.

He lists the reasons she is the one and why she may not be, but then his gut kicks in and he says that “the other girl is just not Rachel.”

Something about her, the very core essence of her character, was so attractive that he felt special around her.

Jerome Powell is trying to run the complex machine of the economy using the same playbook. He is extremely methodical. He collects more data than any other FED chief before him and interviews more small business owners than all of his predecessors combined, all with the goal of making a calculated decision.

For this, the markets applaud him.

As with all things in life, you can collect all of the objective data in the world, with thousands of points of information and unlimited resources, as the Federal Reserve does.

In the end, even algorithms and artificial intelligence supercomputers are programmed by human beings and are prone to mistakes.

If interest rate hikes were a science, we could have a quantum-computing system telling us what they should be.

Just like with falling in love or with any other profession, once all the data is collected, a certain level of finishing touch and personal insight is needed to make the right decision and convince the world to believe you.

The problem with Jerome Powell is that he keeps on flip-flopping because he doesn’t want to fully commit to anything but “stay nimble.”

While Powell said in January that he sees 2-3 rate hikes, the FED has already done one, promised 2 more in one meeting in May, and the market believes that it will actually make TEN of them, sending the Fed Funds Rate to nearly 2.90%! 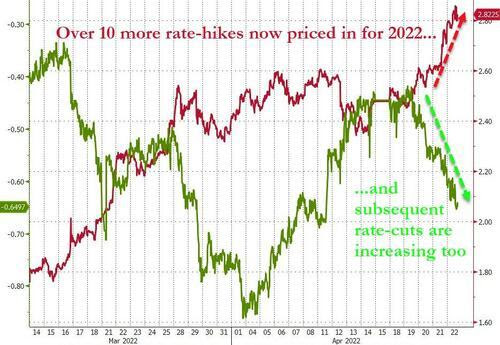 The FED has not faced this much criticism and skepticism since Bernanke’s days during 2008 and 2009.

We now believe that the NASDAQ 100 might even plummet by another 10%-15% and the S&P 500 might enter a bear market if Apple’s, Microsoft’s, and Google’s earnings are a thing of perfection.

Wall Street traders are cashing out, and they’ll be looking for hedging.

This is yet another BULLISH SIGNAL for gold and silver, as well as other commodities.

By the end of this year, gold will be trading for a new all-time high.