The Federal Reserve is Hiding Inflation

The Federal Reserve is hiding inflation. They have been for quite some time now, yet recently, it has become all too obvious. With the massive money creation that has taken place over the past year and a half will come inflation.

So why haven’t we seen it really make a big difference yet? Well, personally, I have noticed that my grocery bill is higher. But it is not up 400% like lumber products. If the Fed wants to continue to hide inflation, they need to do a better job because a lot people are now figuring it out.

Lumber is just one commodity that is “hiding” inflation. Another is housing. The cost of homes has skyrocket lately and a lot of people are still out of work.

Rising prices in fuel, housing, and food are all hitting consumers in the United States a lot harder than the U.S. Federal Reserve or the U.S. government would have us believe. But with the rise in lumber and housing prices and the noticeable spike in food prices, people are really starting to notice. This is not a mere 1% inflation rate or many would not notice.

So where else are central bankers hiding inflation?   The short answer is asset prices.

The people who believe in the “low inflation” myth are being fooled by the fact that inflation in this unusual, central bank-driven economic cycle is concentrated in asset prices rather than in consumer prices. By holding interest rates too low for too long, a massive asset bubble has inflated and is poised to inflate even further as long as economists and central banks like the Fed continue to be fooled by the “low inflation” myth. Unfortunately, the ultimate bursting of this unprecedented asset bubble is going to throw the U.S. and global economy into another depression. 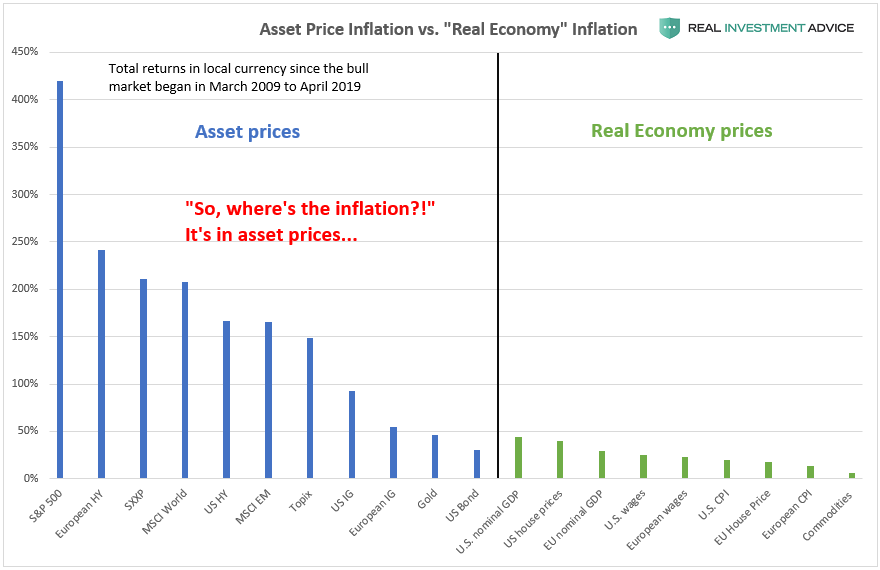 Real Investment Advice laid out an explanation perfectly. Consumer price inflation has remained low while asset price inflation has exploded! This is because asset prices have been acting like a relief valve for inflationary pressures that have been created by record low global interest rates. Not to mention the pumping and creation of trillions of dollars’ worth of liquidity into the global financial system. This does not mean that we don’t have an inflation problem; we have a tremendous inflation problem on our hands, but you need to know where to look.

Food prices are also expected to continue to rise and there will be little the Federal Reserve can do about hiding the real inflation at that point. While most of us have seen the prices rise at the grocery and felt it when it hit our wallets, those prices will eventually reach highs that will leave no one left wondering where inflation went.

Protect yourself by researching and understanding. With the amount of currency creation that has been done since the Great Recession and more so since the coronavirus pandemic, there is absolutely no way inflation is stuck at the 2% rate the Fed is telling us.

Save up some extra cash and make sure you have a little extra on hand at all times if you can. Gold and silver are also powerful hedges against the inflation that central bankers hope they can continue to hide.