Get Good Grades… Go to Work… Vacation for 10 Days a Year… Raise a Family… Retire… and Then Die!

Well, what if it doesn’t work out…

Today, the idea of retirement in terms of the model used and expected return from the planning of this once-in-a-lifetime event is treated as if Moses came down with the 10 Retirement Savings Commandments…

It’s as if the 4% rule came from a burning bush… but the reality is that retirement as part of human history is new – and there’s a ton of uncertainty as to how this new idea will work for future generations. 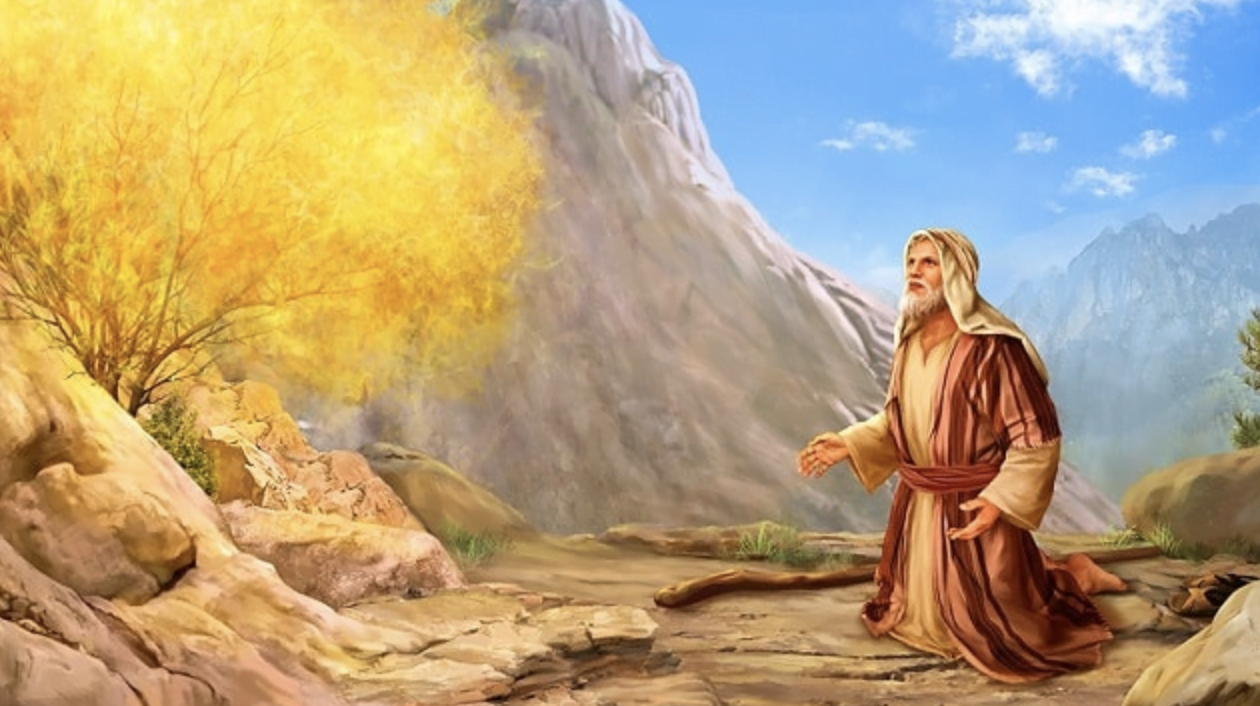 But that’s not what the financial world is telling you, nor your government, and no one from the retirement cartel is ever going to tell you the truth about the real uncertainty of retirement: if you do every single thing you’re told, it could all still blow up in your face.

Retirement itself as we know it today is brand spankin’ new.

It’s true that the pension first came in 13 B.C. when Roman Emperor Augustus paid out a pension to soldiers who had served for at least 20 years.

Outside of military pensions, it wasn’t until nearly a few thousand years later that we saw a civilian worker receive a pension, with the London Port Authority in 1684. Paid out half their income, the pension was fully funded by setting aside 50% of their pay.

1889 was when German Chancellor Ott Von Bismarck introduced the first modern-day “social security,” and he ironically only did it in an attempt to pre-empt a growing socialist movement in Germany that ultimately led to the rise of Hitler and the National Socialist German Workers Party (Nazi).

Pensions for the next 75 years were rare, but during World War II, President Roosevelt, who imprisoned some Americans due to nothing more than their skin color and national background, imposed wage freezes. FDR’s crimes were too many to count. He was a man who stole gold from U.S. citizens, devalued the dollar, and attempted to corrupt the Supreme Court.

By NOT allowing companies to give workers raises, the private sector began to offer pensions to attract the best workers.

The first widespread pension commitment began and accelerated during the 1940s and 1950s.

However, within two decades, employers knew that the pension scheme wasn’t going to work, so through their lobbyists and the Chamber of Commerce, Congress passed the 401(k) act in order to shift retirement responsibility from employers to the employees.

The experiment of the pension failed long ago, however, some private companies continue to fund them. Then, of course, you always have the biggest idiot in the room, the government, who offers 74% of its workers a pension plan, and their pension plans are the worst when it comes to sustainability.

Let’s not forget that the government is in charge of another retirement scheme called Social Security.

It’s a true Ponzi scheme that we’ve all been forced to pay into.

Ida Fuller was the first to enjoy Social Security, at the very top of the pyramid.

Her first monthly check was $22.54. By month two, she had nearly doubled her investment.

She continued to receive checks over her lifetime, taking in $22,888.92 from Social Security that was not paid into by her or funded mysteriously by the government. This is a Ponzi scheme, so her $22,888.92 was funded entirely by other workers, less the 22 bucks she chipped in.

In 1940, when Ida cashed her first check, there were 42 workers to support her government “retirement” check. Today, there are less than 3 workers per every one Social Security recipient. 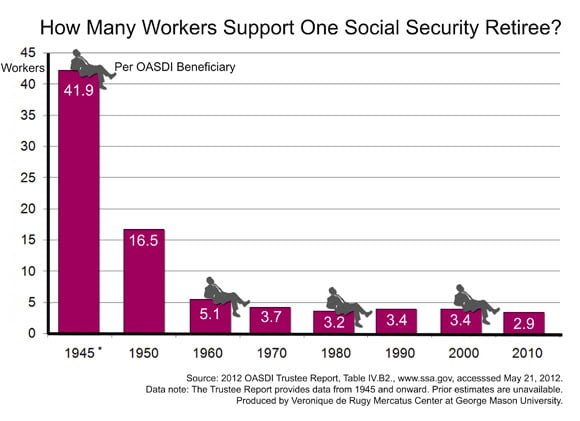 The retirement age of 65 was adopted by the U.S. in 1935 when the life expectancy for Americans was 61 years old.

There’s no science behind the magic retirement age. It’s typically credited to Chancellor Otto Von Bismarck in the 1880s, however, there are no historical facts to base this off of. All we know is that the Germans had it at age 70, when life expectancy was about 37, and then some politician lowered it to 65 to try and win an election.

Since then, 65 has been the number, and it hasn’t moved an inch, despite life expectancy climbing to 78!

This retirement scheme, perhaps the grandest of them all, is truly underfunded and broken, to the point that without the lying and covering up of the real inflation rate, Social Security would have imploded long ago.

According to economist John Williams, if you use the same methodology used in 1980 by our own government to calculate price inflation, senior citizens today should be receiving a check that is 46% higher!

The cost of living adjustment has turned into the cost of survival due to all sorts of fraudulent reporting by the Bureau of Labor Statistics.

The retirement myth is that any of this has been successfully tested. In every case, retirement plans blow up due to structural bankruptcy, failed Ponzi schemes, or worse, outright evaporation of one’s government (think Weimar Republic) or employer (think Enron).

Only the first generations of the Western retirement experiment have enjoyed what was promised to them.

The first Social Security recipients, the first wave of pension plans, and even the people who retired in the 1990s and early 2000s had the opportunity to enjoy making 401(k) withdrawals during a time of a massive run up in the stock market and a relatively low tax environment.

But now, here we are, in 2018, and the retirement planners are pushing millennials and any generation that will listen to max those retirement accounts out, keep investing in Wall Street’s fees and commissions, and if you’re lucky, if everything goes according to plan… You’ll have the wonderful opportunity to take withdrawals from your savings after age 60 in the poorest tax bracket. And yes, that is literally the plan.

Yet no one even questions that their financial plan is to literally be so poor that it’s sold as if it’s to their advantage to be in the lowest tax bracket as a senior citizen. I don’t know about you, but I hope I’m in the highest when I’m old. I don’t want to be poor.

So where do we go from here?

Calpers wasn’t the only one. A Pew Report noted that government pensions added $146 billion in debt in 2016 alone to make up for their 1% gain that year, even though the median assumption was 7%.

They just couldn’t overcome the bureaucrats running a pension fund and the fees Wall Street hit them for.

If the assumed rates of 7% don’t come in, even a small underperformance of 1% would require additional contributions of 10% from the beneficiary… A beneficiary who oftentimes works for the government and has a union that funds the politicians in charge of the employees.

Lower returns will blow up a lot of the pensions, which is one reason why we’re NOT short the stock market. The odds are the FED and central planners will all support pushing the stock market to levels we can’t even imagine in order to paper over the absolute disaster they’ve made of the real economy.

We really mean this, too: unfunded liabilities don’t have to be paid up immediately. A retiree who’s 85% funded could potentially be overfunded if the market returns were high enough. A pension crisis doesn’t have to be imminent (or even inevitable) because the politicians have time and experience in fraudulently propping up markets.

The 401(k) and IRA are not real retirement plans, and they never were intended to be, by the way. Besides offering Wall Street plenty of volume and fees, these retirement vehicles were supposed to be supplemental.

Social Security was a temporary program, a safety net, not a hammock for adults who can wor.

Private pensions are in better shape, but the ones the teachers and police are getting are absolutely insane. They are retiring in their 50s with full pay based on their most recent years of salary, basically giving them a retirement paycheck that is maxed out and has nothing to do with the majority of their income during their active working years.

Dog catchers making 6 figures a year in retirement? We wish this was the worst example, but unfortunately, the price goes to Joseph Robertson, a retired Oregon University professor who is currently receiving $76,111 A MONTH!

These examples are never-ending when it comes to government pensions. Mr. Bellotti recently retired as a football coach, and he’ll be making $559,000 a year for the rest of his life!

Conventional retirement is a myth that never truly existed. It’s a failed experiment that has enriched a few and brought about a massive misallocation of capital at a time where extraordinary wealth was being created.

The idea of retirement needs to be completely replaced!

There is a better plan, and the wealthy (the truly rich) have been using this strategy for centuries.

Everyone needs to adopt a simple plan of becoming financially independent.

You need to completely rethink how you spend money, borrow, and allocate your discretionary income.

Invest for cash flow and nothing else. Buy income and create a portfolio that is a cash flow machine.

You must understand that it’s a vehicle to transfer wealth and has nothing to do with helping you.