The Countdown Has Begun

He spent over 120 hours on this project before looking at properties in the city he zeroed in on. Major developers don’t just do their own research but also pay firms to provide them with reliable data and accurate due diligence.

Large corporations go a step further and triangulate data from multiple sources, sending their own people to verify it.

When governments need to form large, overarching strategies, they commission think tanks and organizations that spend months employing hundreds of researchers, interviewing experts, and pulling the most trustworthy information before forming insights and conclusions.

One such subject is the American pivot from the Middle East into the Indo-Pacific.

President Obama was the first to turn Washington’s attention away from the Middle East to China, and Trump took it a step further by affirming that America wants to deglobalize. But 12 years into the pullback, Biden and his successor will have to consider research like THIS, which is against the idea of allowing China and Russia to enter the region and just focusing everything on the Chinese geopolitical showdown.

The United States needed oil for itself and its allies, but fracking has done away with that. Crushing the Islamic State has made many voices within Washington feel the mission is accomplished, so every dollar and soldier needs to be allocated toward China.

The research above claims otherwise and warns that a strengthened Iran potentially sponsoring, funding, and later exporting ideas of terrorism to Europe and Africa could be too costly of an alternative.

By 2025, Iran could gain the capability of striking missile blows to continental Europe! That’s why Biden’s administration is beginning to realize it must pivot and do it now!

On top of that, Iran could block key straits that are essential for the flow of oil to American allies, thereby weakening Germany, France, England, India, and others.

The Middle East is a powder keg. It always has been and probably always will be. Left to its own accord, it would lead us to another major war by 2030.

The U.S. is dealing with persistent inflation, a national debt overhanging, and internal division over its priorities. As the recession nears, be it mild or rough, the power of the dollar is being shaken. 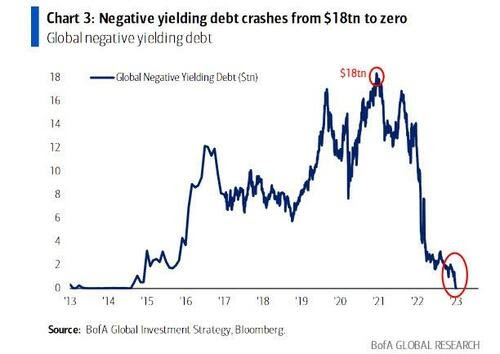 The dollar bull market began to gain enormous steam in 2014 right alongside the rise in negative-yielding debt. To me, this chart showing the absolute end of negative bond rates on a global basis is the beginning of the bear market!

With China opening up and inflation staying higher for longer, silver has been crushing it for the past four months!

Left unchecked, the Middle East would see Iran and Saudi Arabia fight over oil, and I’m telling you that no matter how this goes, America will look weak if it continues to disengage for now, which will send silver over $30/ounce by June!