The Real Crisis is Still Ahead of us

2022 peaked on the first day of trading, literally.

After the nonsensical and illogical year we had in 2021, when the S&P 500 celebrated record highs in SEVENTY different occasions and saw only one pullback greater than 5%, 2022 has been an utter disaster, in contrast.

2021 was a year of denial; the signs of an unsustainable bubble were everywhere, but the train kept charging ahead, regardless.

Keep in mind the market bottomed in March 2009, when the recession was still well underway, which tells me that once the market STOPS pricing in more rate hikes, even before the FED actually pauses, the bottom will be in.

After that, I believe we will trade sideways, until the FED hints that it might be able to ease, but I don’t think that’ll happen in 2023!

After the terrible month of January 2022, when the FED Chairman went to Congress and pounded the table that we’re facing borderline hyperinflationary conditions, we saw the unthinkable come in late February; war in Europe.

Peak globalization had arrived; Russia, feeling threatened by NATO’s imperialistic ambitions, sought to change the power structure and the balance of nations, by occupying Ukraine and making it a satellite country of the Russian Federation, but it failed miserably.

Is it any wonder the economy is stuck in the sand? 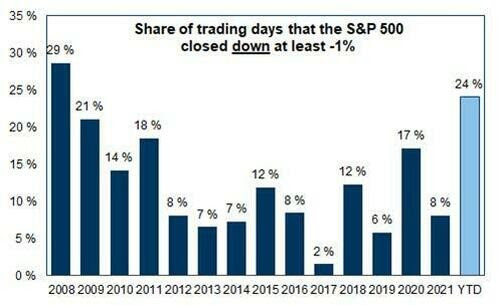 After 75% of the pain has been felt, we are left with the last 25%, which I think might be experienced in panic atmosphere.

What is still required to fully end this saga and to get to equilibrium is for the last of the hyped assets classes to lose their inflated values; start-ups, housing and private equity firms.

Once the last of these stubborn leftovers of the reverse world of zero interest rate fossils comes to the realization that they’re no longer worth as much as they were, when credit had no cost.

Frankly, I hated the bubble. It distorted everything. I also don’t like this bombardment of rate hikes that have caused much pain to millions of unsuspecting business owners.

After it’s all said and done, though, we’ll have a really strong and durable economy on our hands and that’s the promised land.