Uranium in and of itself is a very thin market, limited practically to industry participants: after all, it’s not something that average folks can take physical delivery of! That said, there are a small group of producers where investment opportunities are publicly available, and Uranium Energy Corp, or ticker symbol UEC, is the best one from a valuation and forward-basis perspective. 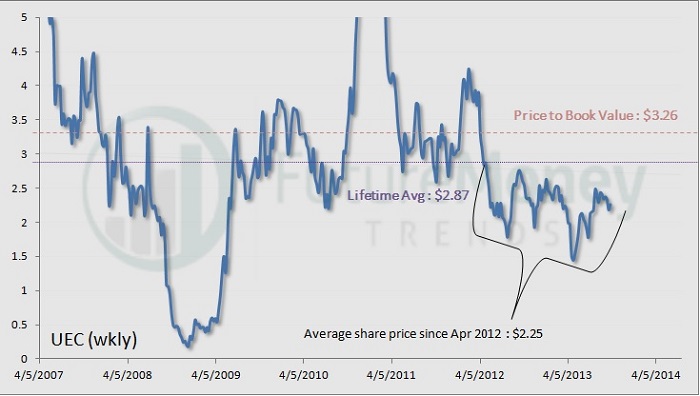 At time of writing, UEC shares can be had for only $2.21, which is below both the Price-to-Book value of $3.26 and the “lifetime” average since IPO of $2.87. It’s even below the average share price between current time frame and April of 2012, when shares dropped below the lifetime number. This is an incredible opportunity considering UEC’s talented management team. 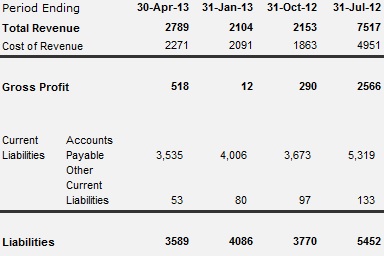 Regardless of industry, companies will only thrive so long as their management team remains inspired, dedicated, and driven: these characteristics always come through in the numbers. With the obvious exception of outright fraud, companies can’t fake good performance. “Creative accounting” inevitably shows up in the books, like an amateurishly concealed fingerprint in a crime scene.

For UEC, a review of their income statement and balance sheet tells us a very positive view of their leadership team. On a quarterly basis, their emphasis on bottom-line growth is articulated by a positive trending margin curve. On the balance sheet, their tight control of accounts payables and other current liabilities have resulted in a significant reduction of debt in a time when other companies are busy piling it on.

This is smart management that has a clear vision of long-term sustainability, not short-term benefits : as an investor, nothing is more important than surrounding yourself (and your money) with people who are on the same page. Tight financial controls are indicative of across-the-board participation, corporate unity, and appropriately structured incentive programs.

As alluded to earlier, the uranium market was hit hard during the commodities downturn in spring of this year and UEC was no exception to this rule: year-to-date, shares are down nearly 17%. The price is making a recovery and technical indicators suggest that this rally has long legs: 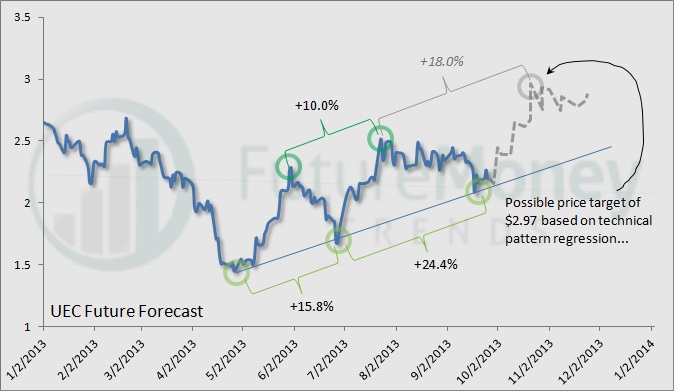 First, there’s nothing to indicate that this market is technically over-heated and most derivatives traders are both holding long-side positions, as well as initiating them, so “paper shenanigans” seems unlikely at this point.

Second, since late April of this year, the price action has been trading in a bullish and somewhat predictable trend channel. Because this “trending” sentiment is relatively strong, we have just cause to apply a linearity model on a forward-looking basis, which would give us a possible price target of $2.97. Nominally, this may not sound like much, but percentage-wise would represent a whopping 34% gain. Such a robust move could materialize by end of October at earliest, although it may require a few extra months.

More important for the long-term investor is stability: there’s no point in putting capital in a company share that has a wide fluctuation base between highs and lows. Fortunately for UEC, the lift in upper range price action is followed in tandem with an even greater boost amongst lower range price action. That means the floor for October should be no lower than $2, which gives UEC a very favorable risk/reward balance.

Are you still on the fence?

We understand…uranium investment is not for everyone. But consider this little known, under-appreciated factoid : before the convenient restructuring of the Dow Jones Industrial Average, which ousted chronic losers in Alcoa, Hewlett-Packard, and Bank of America, only 12 out of the 30 indexed companies showed positive margin curve on an annualized basis. That’s not to say that 18 Dow companies were in the red, but it highlights a painful reality that America’s large-cap companies are struggling to maintain profitable business enterprises. Combine that with poor demographics and a depleted wealth base, it is not hard to imagine a future of “margin cannibalization.”

What this means for you and I is that long-side opportunities in America will be harder and harder to find. From both a fundamental and technical case, UEC is the place to be. Yes, it is exposed to a market that has suffered severe volatility in recent years, yet the outstanding performance of its management team has not only kept share prices respectable against recent averages, but it also highlights the ingenuity of their leadership in maintaining positive margins in a down-trending market. Other mining companies, especially those in the precious metals sector, appear to have given up on themselves and most importantly, on their shareholders. UEC has a fighting spirit that is both admirable and effective.

Given all the market conditions that we have experienced, below is a long-term forecast of what we may see over the next several years: 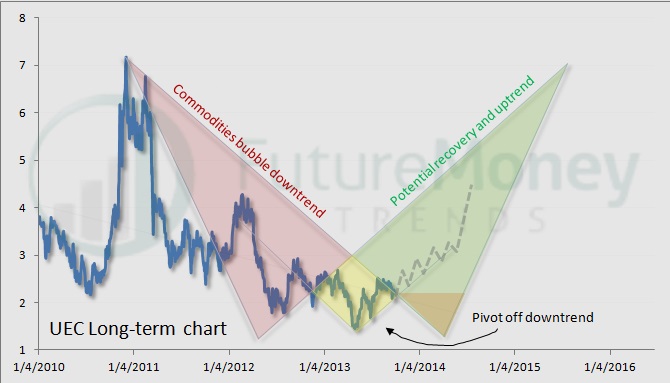 UEC may be setting up a “butterfly pattern” or a “rounding bottom” using standard jargon. In either case, share prices typically fall from a parabolic peak before hitting rock bottom at a pivot point. If the price recovers successfully from this pivot, the ultimate long-term target is the previous parabolic peak.

For UEC, we believe that this pivot occurred during the bottom of the spring commodities sell-off and since that fateful day, shares have been charting a series of higher highs and higher lows. The $3 target mentioned earlier in this article would complete this pattern for the remainder of this year, which would bode well for 2014 and beyond.

UEC is exposed to a very desirable and a much needed commodity: no matter the politics, the perception or the outright paranoia, the cost-per-benefit leverage is overwhelmingly steep in a rapidly expanding world. The ins-and-outs that govern the uranium spot-market can be capricious at times, but statistically, the long-term trend cannot be manipulated: the world needs cheap energy to help mitigate the effects of credit-based fiscal policy and uranium provides a ready answer.

And of all the companies in the uranium market, and for the entire resource sector at large, none provides the enormous return-on-investment potential of Uranium Energy Corp!

For more information, please visit their website at UraniumEnergy.com