SUNK EVERYTHING INTO THIS GOLD STOCK!

All Roads Lead to NewFound Gold

Canada is one of the world’s PREMIER GOLD jurisdictions but the region of Newfoundland where NewFound Gold (TSX-: NFG) has a MASSIVE LAND CLAIM is one of the planet’s last frontiers!

Canada’s terrain has been explored, left to right, for over a century, but Newfoundland has an UNBELIEVABLE STORY behind it. The entire island wasn’t part of Canada until the 1960s!

Much of the interior of the island was privately owned by the Reed family for much of the 20th century, in exchange for building a railroad across the island. This land reverted back to the Crown land in the 1970’s and 1980’s, opening up this FINAL FRONTIER. This turn of events makes this region the only unexplored gold jurisdiction in Canada!

NewFound Gold (TSX-V: NFG) is the region’s largest landowner; self-made billionaires Eric Sprott and Rob McEwen understood the potential of owning A LARGE STAKE in a gold stock, which owns 2% of the entire island!

You MUST consider shares of NewFound Gold (TSX-V: NFG) IMMEDIATELY!

To add to this REMARKABLE BACKDROP, this specific property is located adjacent to the highway and there are logging roads all over the property.

Dr. Quinton Hennigh, the co-founder of Novo Resources and the man whose name has entered the GOLD LEGENDS book thanks to his part in the discovery of the richest, most profitable mine of the decade (the Fosterville in Australia), has invested $15M into Newfound Gold (TSX-V: NFG) after looking at ONE DRILL HOLE.

Right out of the gate, the company has around CAD$75M in cash and NO DEBT. (I will know exact number by end of next week)

Call up the management teams or try to speak directly with CEOs of gold exploration companies and ask what their drilling budget is for 2020. You’ll learn that most, even the big ones, are spending anywhere between $1M and $5M. The ambitious ones spend $10M, but Newfound Gold is going to UNLEASH $25M over the next year alone after the November 2019 hole delivered the BEST RESULTS in this region’s history!

You MUST consider shares of NewFound Gold (TSX-V: NGC) IMMEDIATELY!

Gold is within SPITTING DISTANCE of breaking through the impossible $2,000/ounce milestone!

Gold stocks have already broken out to the upside. This IPO couldn’t be better timed. The investor awareness with a company with $75M in cash, no debt, a $25M drilling budget, and Eric Sprott, Rob McEwen, Quinton Hennigh, and Paul Matysek involved, will make this one of the MOST TALKED ABOUT companies of 2020, but I’m telling you about it before it even has a U.S. ticker symbol!

This is as early as THE BOOK of Genesis!

I’m so convinced that this company is a potential winner that I’ve got A LOT riding on it. 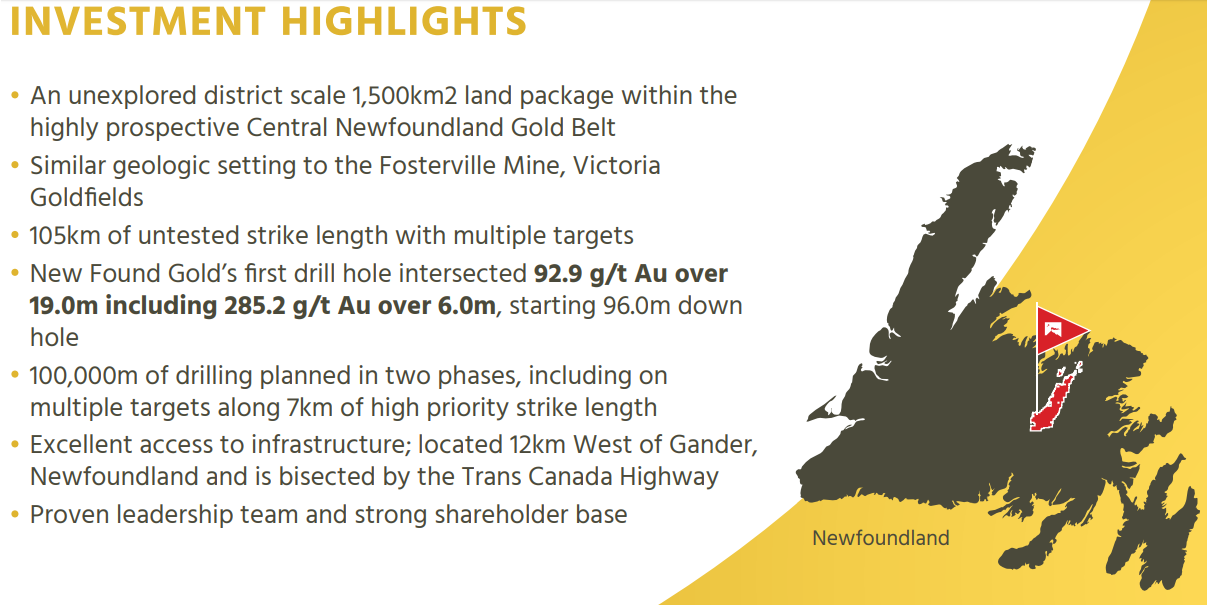 You MUST consider shares of NewFound Gold (TSX-V: NFG) IMMEDIATELY!

In the coming weeks, while millions of dollars are poured into discovering additional gold in the land package, I expect institutions and retail investors to get word of this deal.

THIS COULD BE EPIC!

We are on the cusp of greatness.