Our last crisis trade given to you on March 28th is up 14%. We are holding that trade currently with a 25% trailing stop. Russia is still dirt cheap so we see that as barely scratching the surface as to the type of gain we are expecting from this trade… 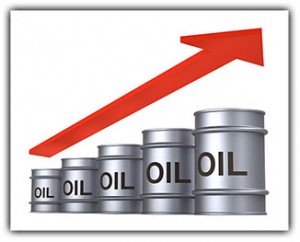 An ocean of oil lies beneath the earth of a region that has yet to be explored with modern technology.

Billionaires are being created there right now, despite the perceived danger of its location, Marriott, Hilton, Pizza Hut, KFC, Ace Hardware, and many others are heading to one of the most secure regions in the Middle East that is surrounded by civil war right now.

This region I predict, within 10 years, will be one of the wealthiest places in the world!

Crisis Investing at its Best!

Right now Iraq is in chaos, an Al Qaeda-inspired ISIS militants are surging through the country, taking cities, tanks, and even helicopters.

No one in their right mind would even consider investing money in Iraq right now at this very moment…which is exactly why I am so excited about it at this time. 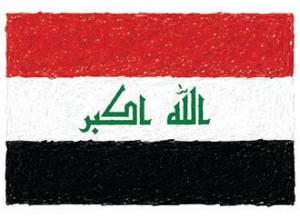 As the old Rothschild saying goes, “buy when there is blood in the streets.” Or as Warren Buffet put it, “be greedy when others are fearful.”

Iraq has 30 giant oil fields, 9 of which are considered supergiants.

Since the region is in chaos, we are going to focus on the safest region in Iraq, which is to the north in Kurdistan. Where with new technology, a region truly unexplored just discovered a giant oil field that has wells producing 11,000 barrels per day. Compare that to the Eagle Ford wells which only produce about 300 barrels per day.

Kurdistan is part of Iraq, but it is very independent, it even has its own regional government and representative to the U.S., separate from Baghdad’s.

The big guys are there, and in times of crisis, they will likely use this opportunity to dominate the region. 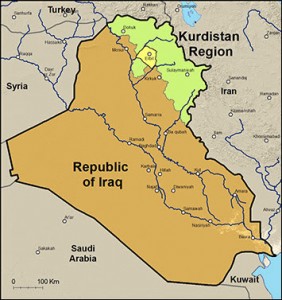 For Kurdistan, oil production is a must, if the Kurds want to generate their own taxes, they need to get oil to the markets. This objective leaped forward this year with the new pipeline that runs through Turkey. According to the Kurdistan Regional Government, average output will be about 400,000 barrels a day in 2014 and could jump to 1 million barrels a day next year! With even that doubling in the next 5 years.

Here is what Brian Swint of the Washington Post recently said about Kurdistan, “Erbil, the regional capital of Iraqi Kurdistan, has all the trappings of an oil boomtown. It bristles with construction cranes. Land Cruisers and Range Rovers with tinted windows ply the busy streets. Oil workers and briefcase bearing foreigners crowd into the Divan Erbil Hotel’s piano bar.”

Kurdistan makes up about 1/10th of Iraqi territory, but holds 1/3rd of proven oil reserves.

Compared to the rest of the country, Kurdistan has been cited as safe, secure, and prosperous. The region itself is also surrounded by beautiful mountains, so if you are thinking of camels, jihadist, and sand, you aren’t thinking of Kurdistan.

The opportunity right now is that while 90% of Iraq spins off into chaos, the other 10% is safely and securely prospering with its own local government, super-giant oil fields, and billions of investment dollars flowing in from large companies like Exxon and Chevron Corp.

Here are the top 3 Opportunities we see in Kurdistan. These are all speculative plays on the region, so please only invest what you can afford to lose.

Use a 33% trailing stop on all your trades and take the next few weeks to enter a trade. For example, if you plan to use $10,000 for these trades, perhaps enter the trades over the next 3 months, slowly getting in. If things get worse, these stocks are likely to get even cheaper, so make sure you have some dry powder when that happens.

A pure play on this oil region, WesternZagros Resources Limited (TSXV: WZR). With two discoveries in the region, production by the end of this year should be about 20,000 barrels per day.

Both of their discoveries are near giant oil fields, so watch this one, this could be a big gainer for us over the next few years.

You can download their corporate presentation using this link: http://www.westernzagros.com/wp-content/uploads/2014/05/2014-June-WZR-Corporate-Presentation.pdf

ShaMaran Petroleum (TSXV: SNM) is a small oil company with a HUGE discovery! With nearly 20% of its shares held by the Lundin family, who are legends in the resource sector. Lukas Lundin is currently the Chairman of Denision Mines (NYSE: DNN).

One of its wells recently produced 42,000 barrels a day, with only 3 wells in this field so far, this amount is expected to grow dramatically.

You can download their corporate presentation using this link: http://www.shamaranpetroleum.com/s/Presentation.asp

The safest of the speculative plays in our crisis trades for Iraq is Oryx Petroleum (TSX: OXC), a $1.3 billion Canadian oil company focused on the Middle East and Africa.

Founded by Swiss billionaire Jean Claude Gandur. I personally was attracted to this company because of its ability to easily raise cash if needed. The regions it is currently in are Iraq, Senegal, and the Congo. Although in 2014, about 75% of their capital will be going to Kurdistan, which is why we have it as an Iraqi oil play.

You can download their corporate presentation using this link: http://www.oryxpetroleum.com/data/presentations/Oryx_Petroleum_Corporate_Presentation_02-06-2014.pdf

All of these crisis trades are in the safest region in Iraq; Kurdistan.  As soon as Mosul fell, the Kurds sealed off the border, including Kirkuk, which is outside of their territory, but is home to critical oil fields.

If the situation gets worse, these stocks will likely go down, however, based on the history of the region and current prosperity boom, we don’t see any absolute capital risk to the businesses that are currently there, protected and highly prized by the local regional government and residents.

Ideally, we would like to see these companies fall about 50% to 90% from their levels before the crisis, and we aren’t even close to those type of opportunities, so be patient when entering these trades.

The reason we alerted you early is because as Iraq falls, oil will rise, so these 3 companies will have two forces at play when it comes to market pricing.

Enter this trade with caution, if you can’t stomach volatility, this trade isn’t for you.