With the latest news revealing that Argentina has defaulted on its debt, would now be an ideal time to invest in the embattled country considering its wealth of natural resources, prime location in the ever-expanding Latin American market, and the potentially substantial discount that the negative fundamentals are suggestive of? All signs seemingly point towards the affirmative and the bearish implications will certainly affect market sentiment. Yet investors should be mindful of the fact that the events leading up to default were highly publicized and the default itself was hardly shocking news. Indeed, many of the equity shares exposed to the Argentine financial and commodities market have been strong performers so far this year.

Some background information is necessary. Back in 2001 when Argentina was in the midst of a severe depression resulting from excessive borrowing and rampant unemployment, the national peso was severely devalued against the U.S. dollar, which was under a fixed exchange rate. The condition quickly eroded into mass hyperinflation, further adding to the misery of the Argentine people. It was at this time that a group of investors collectively known as NML Capital bought up scores of government bonds, speculating that the bottom was in and that a later resurgent Argentina would translate into enormous profits for NML.

The resurgence never quite happened and the Argentine government was having difficulties paying back its obligations. Eventually, NML sued Argentina and the case was presided by a New York City court. After much legal wrangling, the embattled government fired its last hope, citing that coming to terms with NML (who refused to take a haircut on the bond repayments) would trigger a RUFO clause in the bond contract, effectively opening the South American country up to other creditors without any negotiating leverage. The judge denied the defense, leaving Argentina very little choice but to default.

The devastating news pressured the Argentine stock market, as well as the emerging market names in general. For example, the Global X FTSE Argentina 20 ETF (NYSE : ARGT) was down more than 5% during the morning hours of July 31, just a day after the Argentine finance minister officially announced the default to the public. However, the news did not have as severe of an effect as many investors may have predicted. In fact, the sharpest losses on the fund was extracted earlier in the year in mid-January, where valuations dropped 13% over the course of three weeks. 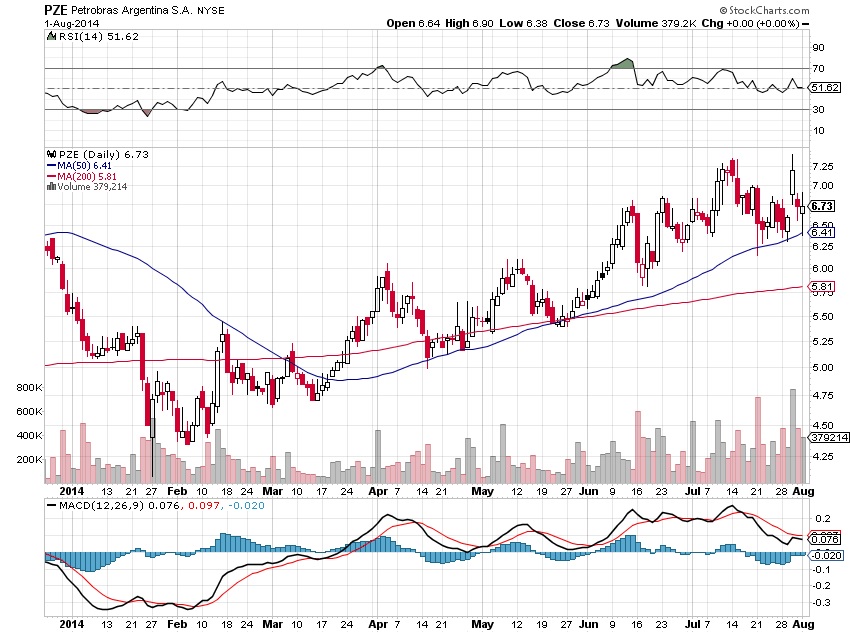 Neither are individual names suffering overwhelming losses. Petrobras Argentina (NYSE : PZE) was down 6 1/4% during the same aforementioned time frame ; a hefty loss, to be sure, but nothing that investors haven’t seen before. In fact, both equity shares’ valuations are up double digits year-to-date in spite of the mid-January tumble and the most recent crisis affecting the underlying market.

This suggests that investors who wish to “bottom-feed” are likely to come out on top and in a quicker fashion than would be normally anticipated. The concept of catching falling knives, or loading up on equities of troubled companies, is a dangerous practice because misery typically breeds more misery. With Argentine equities, at least from a technical perspective, the opposite is true. Despite the body blows, the general price action continues to be positive, trending in higher highs and higher lows. The professional money that has been tracking the region for several years have not left, evidenced by the lack of unusual trading volume within the sell-off. This provides common investors with more confidence that they are getting a discount on a good product as opposed to a fire-sale on unwanted merchandise.

As always, sound judgment and principled money management is key to protecting your capital. While the Argentine crisis does present potentially lucrative opportunities, investors should always be mindful of the risks inherent in the financial markets, especially one that is currently in the throes of default. But with careful discipline, this is one sector to seriously consider!