The tag line to the movie CONTAGION sums it up: NO ONE IS IMMUNE TO FEAR. 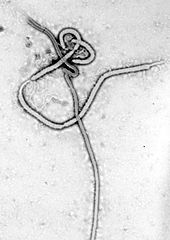 As we’ve noted, you can thank the CDC for bringing the FIRST EVER Ebola case to the United States as a patient the CDC imported landed in Atlanta for treatment on Saturday. Everyone I have spoken to about this in the alternative media is perplexed and troubled by the CDC’s decision to import two Americans with Ebola into the country. Even Donald Trump is concerned about this development, tweeting: Stop the EBOLA patients from entering the U.S. Treat them, at the highest level, over there.

As the CDC “urges calm” over Ebola for which there is NO CURE, Reuters is reporting today that the U.S. Government is seeking to test an Ebola vaccine on humans.

Hmmm, that was quick. The government wants to test an Ebola vaccine on humans already? Maybe they shouldn’t have imported a patient carrying the deadly virus in the first place. This vaccine may be cause for concern on several different levels. As I wrote in 2011 upon the release of Steven Soderbergh’s Hollywood thriller ‘Contagion’, The Real Life CONTAGION Will Be Premeditated And By Design.

I noted how disingenuous the movie’s dialogue was because the reality at that time was that the  psychopaths within the Bio-tech military industrial complex had ALREADY announced that they had weaponzied the bird flu – and made it unimaginably deadly with the ability to kill 1 of every 2 people it infects.

BUT THEY WOULDN’T USE A VIRUS AS AN EXCUSE TO DISTRIBUTE A DEADLY VACCINE, WOULD THEY??

Sure, it sounds crazy, but the REALITY is that Baxter International was caught red handed in 2009 distributing deadly flu vaccines which contained LIVE AVIAN FLU VIRUS. According to Paul Joseph Watson, Baxter called it an “accident” while Czech newspapers questioned if the shocking discovery of vaccines contaminated with the deadly avian flu virus which were distributed to 18 countries were part of a conspiracy to provoke a pandemic.

Now back to the US government’s “Ebola vaccine” tests… According to Reuters:

[su_quote]The U.S. government will begin testing on people an experimental Ebola vaccine as early as September, after seeing positive results from tests on primates, according to media reports on Thursday. The National Institutes of Health’s infectious disease unit is working with the U.S. Food and Drug Administration to put the vaccine into trial as quickly as possible, according to CNN and USA Today.[/su_quote]

Will an Ebola vaccine be a miracle cure for the horrific hemorrhagic virus? Can we trust the men in black who show up at our door and say “We are from the government, we’re here to help”? Will a vaccine be used to spread the virus and cull the population of ‘useless eaters’ as Dr. Rima Laibow’s elite contact described the nefarious plan in 2010?

Are we fear mongering by bringing these issues up? That’s certainly not our intent. The sad reality is that the track record for many vaccines is extremely poor. Some, like Merk’s HPV vaccine can cause horrific side effects, including death. While others cause the very ailments they claim to prevent: The Polio vaccine is now the #1 cause of polio paralysis.

Do we want Ebola cured? Of course. But do we have reservations about what’s going on here? Absolutely. After all, Ebola didn’t make the jump from Africa to the United States on its own. The CDC brought it here.