Amidst the rapid fluctuations in the precious metals sector and the resultant expectation of higher valuations by some financial experts, attention has been diverted from base and industrial metals. An interesting case study is copper. The ubiquitous work-horse is utilized in innumerous ways, yet the metal itself is trading in the red year-to-date, down -5.91% at time of writing against its January opener. In sharp contrast, nickel, aluminum and zinc have all made significant gains this year, as have the industrial precious metals of platinum and palladium. Is copper simply a statistical anomaly, one that will reassert itself along with its metallic cousins? Or is it a harbinger, warning investors against excessive optimism that may turn out to be unwarranted?

First, let’s acknowledge the bifurcated speculation that runs rampant within the copper market. On one hand, copper production and inventory over the next three years is forecasted to exceed demand, thus portending bearish activity in the commodities exchange. This pessimistic finding was forwarded by Zimtu Capital Corporation, a publicly traded mining facility that focuses on resource exploration at the private and seed level. The forecast seemingly is aligned with current production trends, with the U.S. Geological Survey indicating that domestic output of copper increased by four percent to approximately 1.22 million tons.

Even the Chilean government, which is the biggest player in the copper industry, had dropped their current year price forecast to $3.05 per pound in late May. Eighteen of their nation’s market experts surveyed by Cochilco, a Chilean copper commission, found that the consensus price target for 2014 was $3.07/lb, a seven-cent drop from the prior October survey. 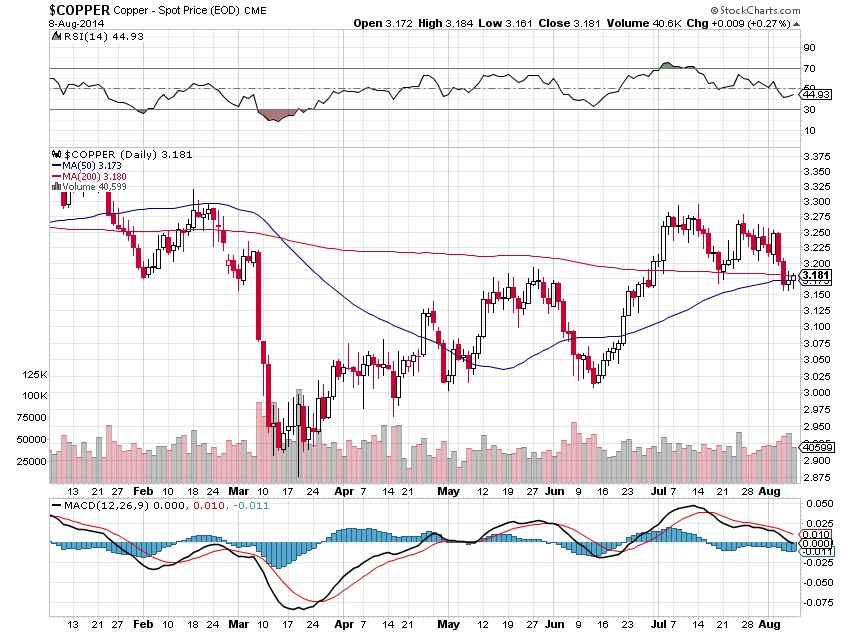 But then there is the other side of the story, one that contradicts the narrative of the commodities bears. According to the International Copper Study Group (ICSG), world usage figures excluding data from China indicated that in the first quarter of this year, global consumption increased approximately 4%, with the bulk of demand coming from the European Union (accounting for 12% growth in the region) and Japan (16% increase in consumption).

Further to the point, the World Bureau of Metal Statistics reported that in the months between January and April of 2014, the copper market recorded a deficit of 286,000 tons. This contrasted with a surplus that was reported for the entire year of 2013, to the tune of 404,000 tons. Specifically addressing U.S. supply demand dynamics, Kenneth McCarthy, chief economist at Cushman and Wakefield, Inc., announced that copper has finally found a pathway for reinvigorated demand, citing unusually challenging weather that was experienced in the east coast. “Employment growth is up and there’s a rebound coming after the long winter we’ve had,” McCarthy was quoted as saying.

For investors, it may be wiser to trade alongside the preponderance of evidence. It’s true that several entities have reduced their price forecast for copper; however, this could be for a number of political or ideological reasons. Deliberately slowing expectations could help prevent over-production and therefore protect a nation’s cash-flow balance.

But what cannot be ignored is the demand : despite an increase in production rates throughout several countries, the hunger for resources, even in times of recession and economic scarcity, remains strong. With geo-political tensions rearing their ugly heads, the global community is even more incentivized to stockpile essential commodities should the preferred source become stymied. A great example of this is the palladium rocket ship that blasted off since the onset of violence in Ukraine due to Russian military intervention. A similar event could occur for other resources and this may be a risk that the global community is unwilling to take.

And if that turns out to be the case, investors could reap huge benefits!