One of the biggest surprises of this year is the unrelenting volatility of the oil market, with West Texas Intermediate posting yet another loss in last Friday’s (August 22nd) session, making this week turn red to the tune of -3.34%. Year-to-date, the market is down -2.27% despite escalating international crises, particularly that of the Middle East, where Iraq is embroiled in a major acceleration of violence from Islamic radicals.

The Islamic State, which has been responsible for most of the conflict within Iraq, made shocking headlines earlier this week when members of the jihadist faction released a video of their brutal execution of American journalist James Foley. Historically speaking, such unmitigated turmoil typically results in immediate constriction of an affected region’s business enterprise and any commodity exchanges. Since Iraq is the birthplace of OPEC, the investment community at large speculated that oil prices would once again be on the rise and provide an easy money making opportunity.

The market had started off promisingly, with WTI closing a tick above $100 per barrel on December 27th, 2013. Then, on the opening drive of the new year, the market tanked, starting at the gate at $98.50 but quickly dropping to $95.44, a remarkable day for the “contrarian-bulls” if there ever was one. In hindsight, it is easy to say that the precipitous decline was a harbinger, but the greater reality was that enthusiasm throughout 2013 was being artificially pumped into the financial sector as a whole by the U.S. Federal Reserve. 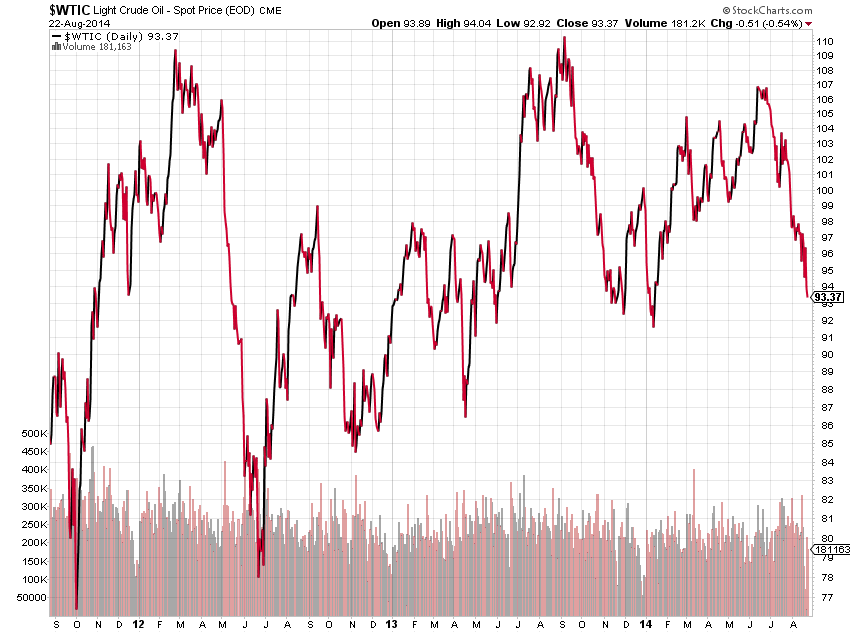 At some point, the broader indices would be forced to correct, and many astute managers used the window of opportunity at the end of the year to dump out of positions and secure a profit. In the following January, there wasn’t much active volume to begin with, and the rest of the crowd followed suit, dragging almost everything down with them, including crude oil.

But few anticipated regional instability in the Middle East to spill over into Iraq with the fervor that it did, forcing President Barack Obama to initiate air strikes against Islamic State targets. Ordinarily, any threat, real or perceived, to a vital commodity is a logical windfall for the bulls. It is the pivotal reason why palladium prices skyrocketed following Russia’s invasion of Ukraine.

Russia is the largest producer of the precious industrial metal, followed closely by the ever politically erratic nation of South Africa. Even though palladium demand is largely isolated to a singular industry, with 80% of annual supply being allocated for automotive applications, the metal managed to hit multi-year highs by challenging the $900 level.

The same logical pathway was not established for crude oil. Industry analysts have cited the departure of major players, such as J.P. Morgan and Goldman Sachs, from the oil market as contributing to both the volume and valuation decline. Higher efficiencies in automotive technologies have also pressured prices. Some experts believe that the condition will worsen for oil bulls, as lower prices inevitably squeeze out profitability margins for resource exploration projects.

Nevertheless, oil remains the lifeblood of any nation. Although advancements in alternative energy sources have made headlines, they haven’t reached the prevalence required to induce a paradigm shift in the global economy. As of yet, so-called “green technology” is an asset only available to the wealthy and it has negligible impact on the military industrial complex. As long as weapons of war rely primarily on fossil fuels, the near and intermediate future of oil is firmly planted by bullish hands.

Surely, over the next century, the promise of an alternative energy source will be fully realized. Until then, both the need and the politics of oil suggest that the current volatility is a rare but genuine gift by the finance gods.