Gun Surge in the Making?

Often times, bullishness towards the commodity or resource sector is driven by the sentiment of scarcity, the real or perceived threat that a particular asset may be rendered inaccessible at current market prices. Such pressures evoke a sense of finality within the human psyche; thus, scarcity elicits an emotional response unlike other investment stimuli, where “slow-boaters” may find comfort in catching the next seasonal wave of opportunity.

The threat of a fleeting time frame also has a heavy societal impact, where common citizens are all too familiar with the paradigm of constantly increasing food and energy prices, not to mention the outrageous premiums now being charged by higher education establishments, even though information is hardly a rarity in this technological age. We can therefore conclude that the engine of price acceleration of any asset typically is driven by speculation as opposed to any real threats to the supply demand equilibrium.

This reality may bode well for gun enthusiasts, and more specifically, firearms collectors and investors of publicly traded weapons manufacturers. Over the past several years of President Barack Obama’s much maligned reign, emotional reactions in response to tragic events of gun violence have spurred unprecedented spikes in both firearms and ammunition sales. Comparing trough (December 25, 2012) to peak (June 9, 2014), the share price of Smith & Wesson Holding Company (NASD : SWHC) jumped over 115%, a direct result of the heinous Sandy Hook incident which led to a national outcry against guns. 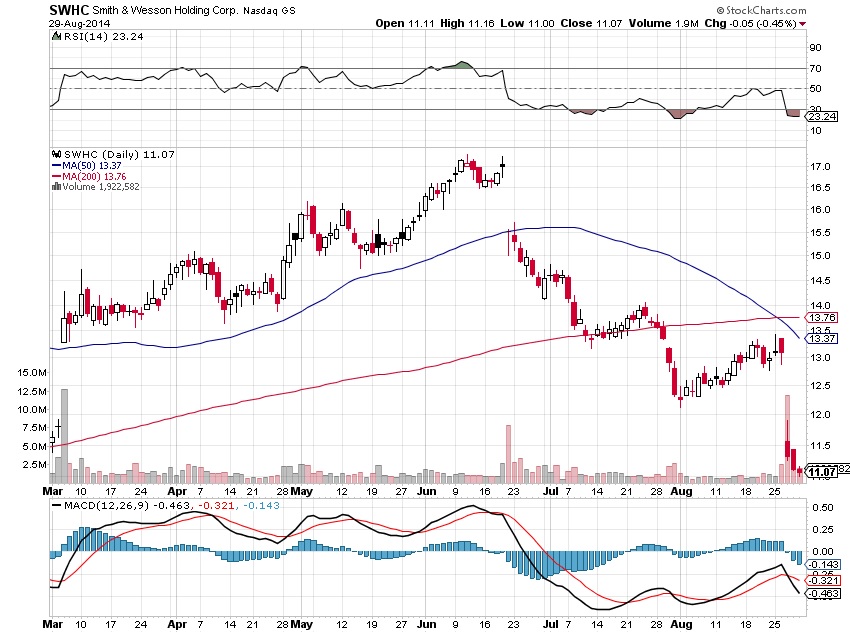 The AR-15, essentially a civilian version of the military’s M-16 assault rifle, was a natural target of gun control lobbyists and the uninformed public at large. Because of its menacing aesthetics, relatively powerful 5.56 caliber ammunition, and its penchant for finding itself amongst highly publicized violent shooting events, many questioned the need or necessity of allowing such weapons to be distributed into public hands.

Ironically, the national outcry had an opposite effect than many pro-gun control supporters had hoped. Sales of AR-15s and similar looking “black rifles” shot through the roof, alarming both liberals and gun manufacturers alike. Leftist groups were shocked at the spite in which many chose to exercise their 2nd Amendment rights, while factory production had to keep up with huge demand spikes and exponentially growing back order lists. Even the introduction of price premiums to the most off-brand weapons did virtually nothing to quell the fire. It was not so much the actual availability of guns that mattered to people but rather, their legal accessibility. Any inkling that the government would move to restrict individual rights was met with ready and open wallets.

However, fortunes are made and fortunes are lost, and despite the ever-rising paranoia of the citizenry against big government encroachment, the gun industry is no different. What started quite literally as a bang in 2013 has so far landed as a dud in 2014, with the Federal Bureau of Investigation noting the sharp drop this year in background check paperwork mandated by law when purchasing firearms.

So does this spell the end of the gun craze? On the contrary, investors may want to keep SWHC on their wish-list. Even though the company’s most recent earnings report was dismal, and their equally horrible forward-guidance notwithstanding, we have to remind ourselves that the consumer base for firearms, according to industry expert, Lawrence Keane, has expanded, with a quarter of purchases over the past few years coming from first time buyers, and a substantive uptick in acquisitions made by women.

This tellingly suggests that the current consumer base is not saturated by the stereotypical archetype of the gun nut, the loner and outsider that can relate better to a bolt-action assembly than to a human being. Instead, gun retailers are turning converts into people who have never even set foot into a gun shop, let alone acquire one prior to the mass liberalization of America.

While it is true that gun sales have come down, this is by no means a permanent condition. Like any other commodity, the firearms industry has its own ebb-and-flow, and softness in the market should be greeted with anticipation, not fear. In terms of public investment, it may not be advisable to attempt to catch a falling knife in the short term. The immediate sentiment suggests that stocks such as SWHC and its competitor Strum Ruger (NYSE : RGR) may be due for another sharp correction, or even a series of them.

But just as many experts have pointed out, the gun industry is by no means a dead-end. One more threat to personal liberties may be all that’s needed to kick-start a new plateau in this exciting and controversial sector.