Resurgence in the Mining Sector 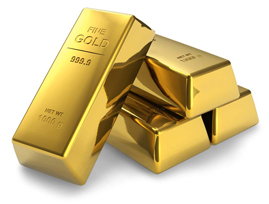 Despite multiple geo-political crises teetering on the edge of a collective meltdown, gold bullion was under some pressure on Friday as speculation increased that the U.S. Federal Reserve will raise interest rates sooner than expected.

Despite gold and to a lesser extent commodities being a traditional safe haven asset during times of instability or uncertainty, the implications of a new shift in monetary policy outweighed extremely troubling and tragic events that have occurred in just this past week.

[su_quote cite=”Javier by Luzi Ann and Larkin, Nicholas” url=”http://www.bloomberg.com/news/2014-07-18/gold-holds-gains-as-plane-loss-geopolitical-tension-spur-demand.html”]The Fed may have to raise its benchmark rate more quickly than planned as unemployment drops and inflation accelerates, James Bullard, president of the St. Louis Fed, said yesterday. Yesterday, gold jumped the most in four weeks after a Malaysia Airlines plane crashed in Ukraine and Israel sent ground forces into the Gaza Strip. Russia and Ukraine blamed each other for the downing of the passenger jet that killed 298 people.[/su_quote]

Unfortunately for media traditionalists and those that follow their framework of journalism, they appear to have misconstrued the basis for the recent decline in bullion prices. Though the Fed have consistently warned the public about modulating policy based on actual trends within the economy, the central bankers’ justification for such rhetoric is exceptionally faulty and deceptive.

On June 12th of this year, Bloomberg reported a week-over-week increase in the number of applications for unemployment benefits. Although the nominal increase was rather small, the media outlet did note that a stronger push for wage growth was needed to sustain an economy that is 70% dependent upon consumer spending. In reality, most of the so-called “economic recovery” is a broader compositional change of the term employment.

[su_quote cite=”Jamrisko, Michelle” url=”http://www.bloomberg.com/news/2014-06-12/jobless-claims-in-u-s-increased-4-000-last-week-to-317-000.html”]At the same time, about two-thirds of the labor market indicators that Federal Reserve Chair Janet Yellen monitors haven’t yet returned to pre-recession strength. Still-elevated levels of underemployment and long-term unemployment, and a weaker rate of workers who are comfortable enough to quit their jobs, are among the gauges that remain weaker than 2004-07 averages.[/su_quote]

Fundamentally, we can expect further escalation of violent tensions in Europe and the Middle East, with no real indicators suggestive of a sustained cease-fire. That alone makes bullion an attractive defensive asset given the circumstances. But the notion of an increase in interest rates is far from a given. While it could happen, the economy by the Fed’s own admission is not improving in real terms. Thus, a continuation of the monetary status quo is the more probable forecast. 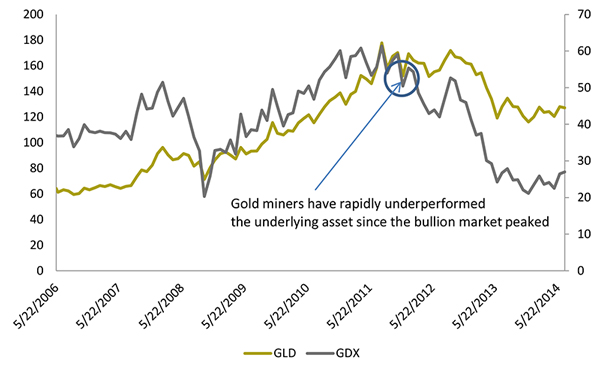 This not only highlights the potential effectiveness of gold and silver, but also that of the mining industry. The more volatile and riskier cousin of the metals complex, the miners as a collective index tends to correlate strongly with the underlying physical asset. However, individual mining companies are exposed to business and management concerns, such as competition, financing, profitability margins, and liquidity. The uncertainty of the precious metals and commodities sector adds more pressure to an already stressful industry.

On the surface, such volatility doesn’t engender much confidence amongst the mainstream investment community, yet the current circumstances may have opened an unprecedented opportunity for those looking to acquire equity shares at deeply discounted prices.

Against the popular GLD gold fund, the GDX, or the Market Vectors Gold Miners ETF, has severely underperformed, moving down to lows not seen since the financial crisis of 2008. Meanwhile, the GLD, which essentially tracks the Gold COMEX price action, has hit levels that were registered in 2010 just prior to its explosive move one year later. While that is no guarantee that the GLD and its associated metal will repeat the performance, what can be said is the GDX represents a more profitable opportunity from a value-play mindset.

“With turmoil being the name of the game this year,
watch for a possible re-emergence of both the bullion and mining sector markets!”